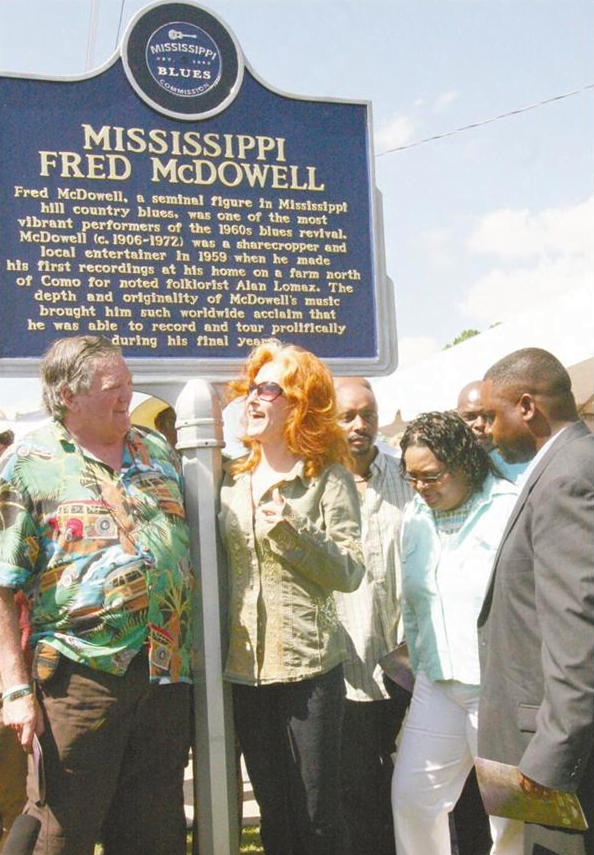 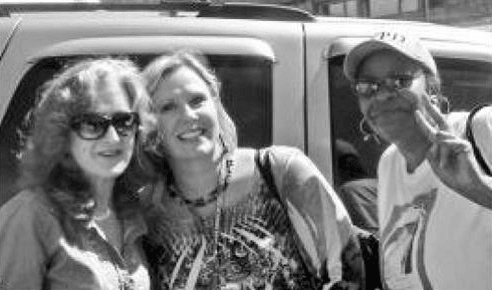 I received a press release a few weeks ago that one of my favorite musicians, Bonnie Raitt, would be in Como on May 7 for a special ceremony honoring the late bluesman Mississippi Fred McDowell.

Raitt’s known for “Something to Talk About,” the ballad, “I Can’t Make You Love Me,” “Nick of Time,” and many blues songs.
She would be on hand for the unveiling of a marker honoring McDowell and putting Como on the Mississippi Blues Trail.

Before receiving this press release I had no idea that Como was once home to a music legend.
Como has received attention recently following the recording of “Como Now: The Voices of Panola County.”
That CD consists of local gospel singers who recorded all 16 songs in one day at Mt. Moriah Church in July of 2006.
The Daily Telegraph, a newspaper in England, published a review of the recording, commenting “Como Now presents gospel music in its purest form: it features no instrumentation whatsoever, only sublime human voices, giving joyful expression to their faith.”
The album was conceived by a Brooklyn-based company which had somehow discovered the rich concentration of talented singers in Panola County. So they placed a newspaper advertisement inviting the community’s most talented to turn up for a day’s recording at Mt. Moriah Church.

With this newly discovered talent and the memory of a reknowned bluesman to honor, Como was ready for Bonnie Raitt.
I grabbed my camera and note pad ready to take pictures of one of my favorite female artists.
I walked down Main Street and immediately saw Earl Burdette, who works with the Como Police Department, Sheriff’s Department and is also my friend.
With a huge smile I shook Earl’s hand and said, “I wouldn’t have missed this for the world!” Earl informed me he was Bonnie’s bodyguard.
The Sheriff’s Department had lent its Mobile Command Unit for use by Bonnie and other officials and guests in Downtown Como that day.

Blues fans were gathered outside it with their guitars and Sharpies.
I talked to a man who drove from Ohio just to see Bonnie. He had several famous blues signatures on his Vista guitar.
Johnny Lang, who sings, “Lie To Me,” was the signature that stood out the most. Lang has played the blues since he was a kid and is one year younger than I am. (His birthday is actually two days before mine in January).

Earl tried to get me a private interview with Bonnie, but she was only giving two.
The first lady who got an interview worked for a blues magazine in Norway. She told me she had B.B. King on her agenda, too.
She’d seen Bonnie a few days earlier at Memphis in May.
The second interview was with Mississippi Public Broadcasting. 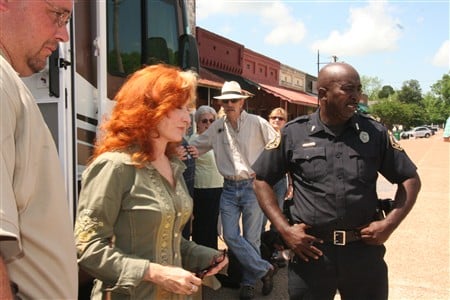 Mike Davis (left) and Earl Burdette (right) provided security for singer Bonnie Raitt who was not threatened by anything in Como except maybe adulation. Both men are deputies and both serve part-time on the Como Police Department where Davis is interim chief. © Emily Williams

When Bonnie walked out of the Command Unit she was as beautiful as I expected her to be.

After the Como Mayor, Mississippi Fred McDowell’s family, and others gave their speeches Bonnie stepped up to speak about her old friend.
Raitt, a California native, told the crowd,

“He was the first person from the South I got close to and I’ve always admired southern blues.”

She went on to say she met McDowell when she was around 18 years old.

I later found out I also took a picture of a photography legend, Dick Waterman. He’s taken famous pictures of Janis Joplin, Muddy Waters and other blues legends.

After the entertainment by the Como Mamas (from the “Como Now” CD) and students from the Mississippi School for Math and Science, performing one of McDowell’s well-known songs, “Shake ‘em Down,” it was time for Bonnie to walk back to the air-conditioned mobile unit.
At this time she had given no autographs and posed for no pictures, not even with the man who’d come from Ohio with his Vista guitar and “Zorro” mustache.
I saw the Southern Reporter’s Donna Taylor in the crowd and I told her we had to get a picture.Donna gave me the guts to ask Bonnie for a picture, even if I couldn’t get an interview.

It was time for Bonnie to get into her SUV with her driver and that’s when Earl told me he had taken care of it. I had given Earl a copy of The Panolian earlier and asked if he could just get her to sign it for me. Bonnie’s agent apparently told her not to give autographs or take pictures with any fans that day.
Earl said Bonnie told her agent her bodyguard might want an autograph. So she signed The Panolian at Earl’s request.
As she walked toward the vehicle Donna threw the camera to Earl. He snapped our picture with Bonnie’s approval and made one of my dreams come true.
I owe a big thanks to Earl/bodyguard/photographer for making a day I will never forget.

Bonnie was gracious and sincere when I told her I’d loved her music since I was a child and my children now enjoy her music.
Bonnie is also known for covering a beautiful version of a song called, “Angel From Montgomery.”
I told Earl he was my “Angel from Panola.”