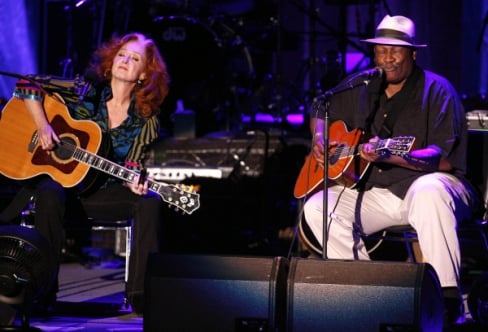 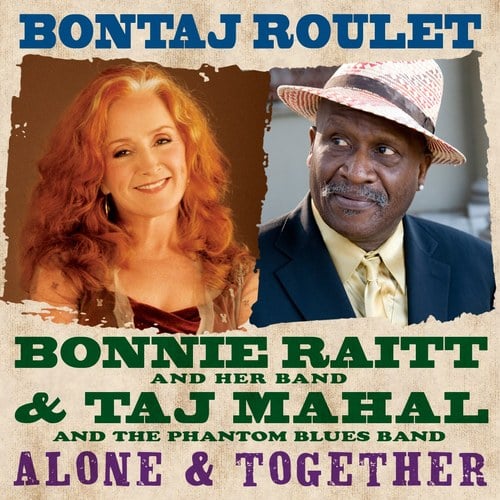 As the third set of the night got underway, Bonnie Raitt and Taj Mahal, two old friends who’d never before toured together, prowled the Greek Theatre stage, playfully sassing each other.

“Tramp!” the flame-haired Raitt purred, or maybe growled, at her partner on this summer outing they’ve named The BonTaj Roulet, a play on the old Louisiana French phrase for “Let the good times roll!”

“What you say?” Taj Mahal hollered back in pop-eyed mock indignation.

“Listen here, little red mama! All the women up in here tonight know big daddy is a lover!”

And with that, Bonnie and Taj and their combined bands jumped into a feisty version of Slim Harpo’s “Baby, Scratch My Back.”

It was a typically smile-inducing moment in a night that provided many, as for 30 songs and nearly three hours Friday the pair offered up a wide-ranging night of the rootsy, blues-based songs both Raitt and Mahal long have championed.

Taj opened with a set of covers and originals that felt right at home with the New Orleans music-hall décor of the stage.

An R&B instrumental that gave each of the guys in his Phantom Blues Band a chance to shine segued into the slinky groove of “Diddy Wah Diddy” and the Fats Domino romp “Hey Josephine,” both which found Mahal in fine, gravelly voice.

From there the set followed a similar pattern: a song of his own such as “Farther on Down the Road,” a soul-blues number into which he poured plenty of emotion, then a good-time blues classic such as “Annie Mae,” which gave him an opportunity to show off his fine chops on acoustic guitar.

“Oh, yeah, babies, grandpa can rock!” he hollered at the end of the instrumental “Seven Eleven,” and with “EZ Rider” he rocked it even more, the 67-year-old bluesman dance-stepping with plenty of energy as he and the band wrapped up their set.

As much as the crowd loved Taj, when Raitt arrived after a brief intermission it was clear that she had at least a slight edge in the amount of fans that filled most of the Greek.

She opened with “I Sho Do,” which quickly reminded everyone what a skillful slide guitar player she is, and then jumped straight into one of her bigger hits, her cover of John Hiatt’s “Thing Called Love,” which had many in the crowd up and dancing.

“It’s a very, very powerful night, as we all know,” Raitt said in reference to the 9/11 terrorist attacks. “I’m hoping to give you a different memory than the one you’ve been thinking of earlier today.”

She moved to the keyboards then for “Nick of Time,” a song she dedicated to her parents and her brother Steve, who died a few months ago and was much on her mind throughout the night. The song, with its message of not waiting until time runs out on you, seemed apt for the sad national anniversary, too.

Even more than Taj Mahal, Raitt was in the mood to talk, introducing “Your Good Thing (Is About to End)” as a number she used to dedicate to the previous president, and now just sings in memory of “all the people I’m glad I’m not going out with anymore.”

Her band left the stage midway through for Taj Mahal to come out and duet with her on three acoustic blues classics, the pair sitting on chairs center stage with Raitt’s slide guitar work fitting beautifully with his finger-picking.

But it was a softer moment after that interlude that provided perhaps the highlight of the night. Standing alone center stage, Raitt sang the opening verse of “Angel from Montgomery” without accompaniment, her voice beautiful and clear, sounding as good at 59 as it did when she recorded the John Prine classic 35 years ago.

The band softly joined in with guitarist George Marinelli adding a lovely electric solo, and for a rare moment it seemed like the entire crowd was silenced by what they were hearing. (And thank goodness, we must say, that the happy drunk chatterboxes in front us had left for more beer during this one.)

More of her best-known songs followed: “Something to Talk About,” which she appreciatively noted had been “kept alive by American Idol,” and finally another beautiful big-voiced ballad, “I Can’t Make You Love Me.”

At that point, you’d pretty much had a full show that would have satisfied most people, but the final act, like any good New Orleans party, just kicked it up to another level of fun.

The delight Bonnie and Taj took in singing with each other, with their combined bands on stage to create a powerful roar, was obvious. And for most of the final seven songs the audience was up and dancing.

Of course, these were mostly party songs, sing-along numbers such as “She Caught the Katy (And Left Me a Mule to Ride); “Wah She Go Do,” a song from Raitt’s 1973 album Takin’ My Time, on which Taj played and helped produce; and her own innuendo-filled lovers duet, “Gnawin’ on It.”

Elmore James’ “Coming Home” served as the final song, and in introducing it Raitt also summed up much of this night of old songs made new and exciting once more: “This ain’t no museum piece This is a living piece of” – and here we lost her, but it sure sounded like she said – “psycho-funk-adelica.”

Bonnie with her band again:

Bonnie and Taj with both bands: 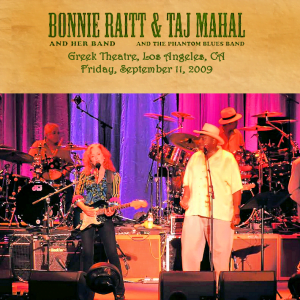 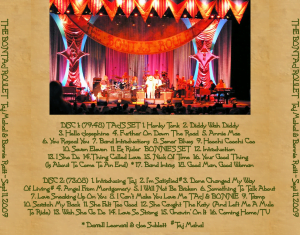 Bonnie Raitt is all emotions at grandstand show
Raitt’s Minnesota State Fair concert was tinged with grief, grit, gratitude and love as she saluted her brother Steve, who died of brain cancer in April.

Bonnie & Taj at The Bank of America Pavilion in Boston