By MESFIN FEKADU
The Associated Press

NEW YORK (AP) — After back-to-back tours and albums, Bonnie Raitt said finally finding time to deal with the deaths of her father, mother and brother helped her break writer’s block and craft songs for her latest album and tour.

“I don’t write often and easily …This particular time after a period of about 10 years when my family — my parents and my older brother — were all ill and passed away in a short period of time… I was pretty fried, and I took 2010 as a complete break from thinking about what I wanted to do next,” she said. “(I did) some grief work with a support person and I just really felt all the things that had been pushed aside by all that loss and trauma. And I came out of it really grateful.”

In this March 7, 2016 photos, singer Bonnie Raitt poses for a portrait in New York to promote her new album, Dig In Deep  © Drew Gurian – Invision/AP

“Dig In Deep,” released last month, features a number of personal songs Raitt co-wrote as well as her signature guitar. She also said she got a boost from her last album, 2012’s “Slipstream,” which won the Grammy for best Americana album.

“I was rejuvenated by ‘Slipstream’ … and I co-wrote a song on that one with my guitarist …The words didn’t go, so it forced me to write some songs that went with what my experience was, and that kind of got the wheels greased,” she said. “I kind of wrote on assignment. …After all that loss, to finally have the time and freedom and not have to be worrying about family members, I had more opportunity to write.”

On the new album, 66-year-old Raitt co-wrote five of the 12 tracks, including upbeat album opener “Unintended Consequence of Love” and the political “The Comin’ Round Is Going Through.” The album also includes her versions of INXS’ “Need You Tonight” and Los Lobos’ “Shakin’ Shakin’ Shakes.”

She said the second verse of the piano ballad “The Ones We Couldn’t Be,” which she co-wrote, is “really about family members.”

“I know they were sorry they couldn’t be what I needed and I was sorry I couldn’t live up to the expectations,” she said. “And at the time when the relationship’s not working or you’re under stress, you tend to put blame not necessarily where it’s really accurate — it’s all about them, if only they acted different — so the reckoning that happens years later is your realize you both just did the best you could.”

The Rock and Roll Hall of Famer, whose hits include “I Can’t Make You Love Me,” ”Something to Talk About” and “Love Sneakin’ Up on You,” said she’s thrilled to be touring with the new songs. The “Bonnie Live in 2016” tour kicked off last week and will visit New York City, Oakland, Austin and Nashville, Tennessee. She will also play international dates in the summer.

Raitt also said there was some anxiety when she began writing for her new album.

“It made me nervous knowing I was going to be writing more of the songs and I was saying, ‘Oh my God, I know so many people out there, they’re gonna say, ‘This one unfortunately is not as good,'” she said. “I don’t like to be compared (to myself), I just wish everybody would say, ‘She’s doing the best she can’ — especially because it was more risk with my own tunes. But so far everyone’s relating to them so I’m really smiling a lot these days.”

Raitt also wants more people outside of her fan base to gravitate to the new music: “I hope people can relate to it, no matter what age they are.”

Though it’s hard to tell, Raitt said she started to play guitar and write songs as a “hobby.” She recalls getting her first guitar for Christmas and playing some much her fingers bled.

“I just played till I had calluses and my fingers bleed and I just learned every Joan Baez song I could learn, and I became the camp fire counselor that sang the songs at my camp,” she said. “And I just thought music can change the world, and I still feel that way.” 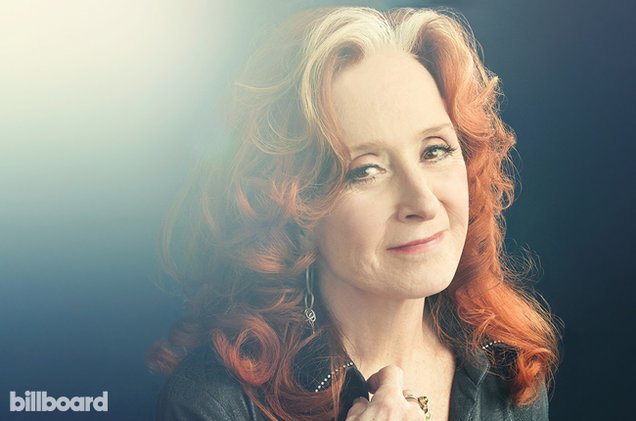 In 2010, Bonnie Raitt was struggling with the loss of her brother and both of her parents. Now, 40-plus years into her career, she has channeled ‘the dark stuff’ into her most personal album. 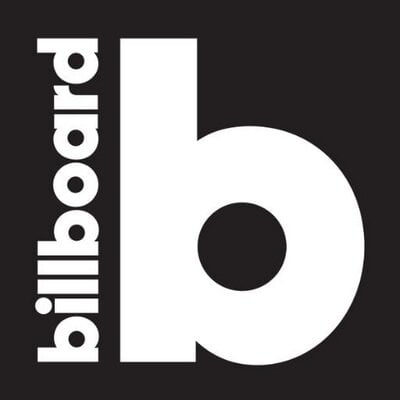 Before B.B. King‘s May 2015 death, the famed guitarist-singer-songwriter ­reminisced in his last interview about the artists — T-Bone Walker, Lonnie Johnson, Muddy Waters — who made lasting ­impressions on his life.

“Add Bonnie Raitt to that list,” the 89-year-old said. “I came up in a macho world and never thought I’d ever declare the best living slide guitarist to be a woman. Well, I’m declaring. I’m also saying Bonnie is as true-blue an artist as anyone before or since. She might be singing pop or she might be singing R&B, but she’s never far from the source. She has become part of the source herself. She’s a master.” 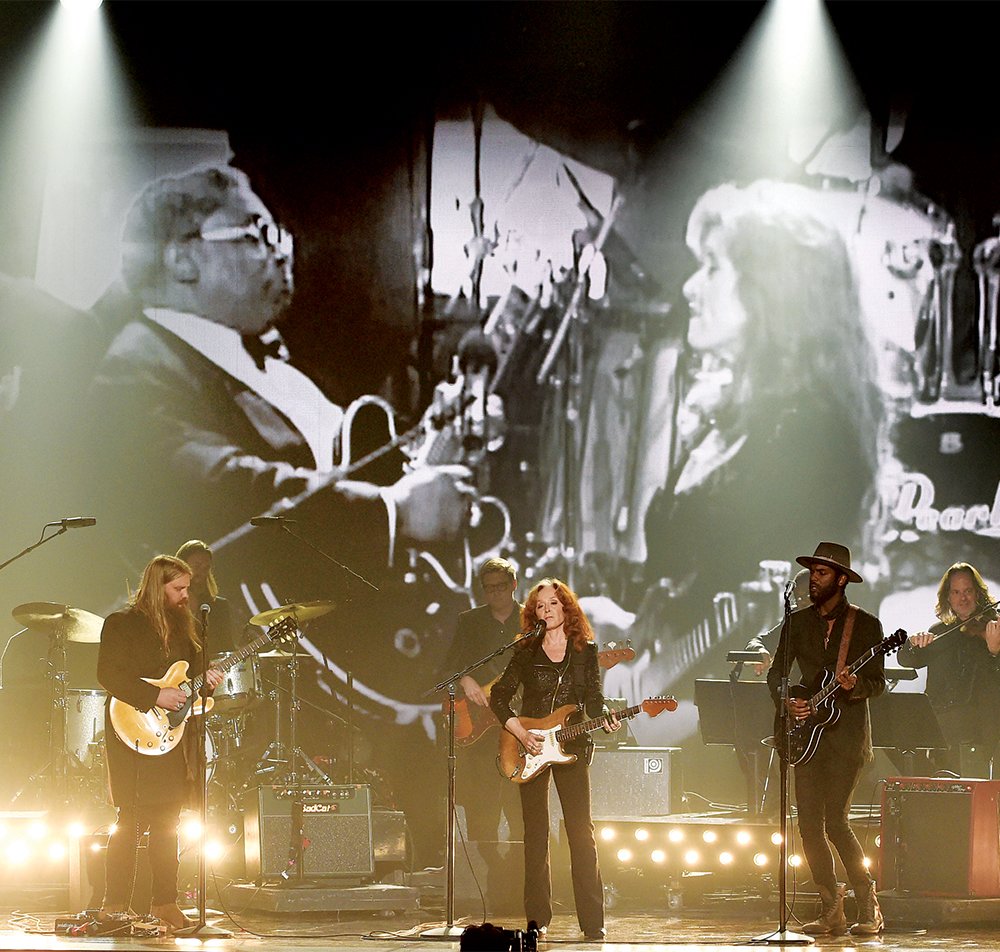 Bonnie Raitt performing with Stapleton (left) and Clark (right) during a tribute to B.B. King at the Grammys on Feb. 15, 2016. © Getty Images

The Friday before the 2016 Grammy Awards — hours before rehearsing the ­tribute to King she would perform with Chris Stapleton and Gary Clark Jr. — Raitt laughs when she hears the blues giant’s praise. “I appreciate that so much, but when I started out, I never expected to make a living at music. I just fell into it. Man, I had this fruity folky voice I couldn’t stand. Always wanted more gravitas. All I could do was adopt a blues-mama ­persona. When I opened my mouth to sing, I felt like a woman of 45 but sounded like the 21-year-old pipsqueak I was.”

Today, at 66, Raitt no longer has that problem. Universally respected as an artist, the Rock and Roll Hall of Famer has forged a long and brilliant career that splits into two sections: the 20 years leading up to her 1989 Grammy triumph Nick of Time — the album that sealed her superstardom and has been certified five times platinum by the RIAA — and the 26 years since. Her output has been consistent with her essential blues aesthetic: 20 albums and a staggering 185 guest ­appearances and duets.

“She is in a league of her own as a ­performer, singer, guitarist,” says Alabama Shakes frontwoman Brittany Howard, who performed with Raitt in 2014. “In the short time we have spent together, I was amazed at how she carries herself — and her respect and love of music and its history.” 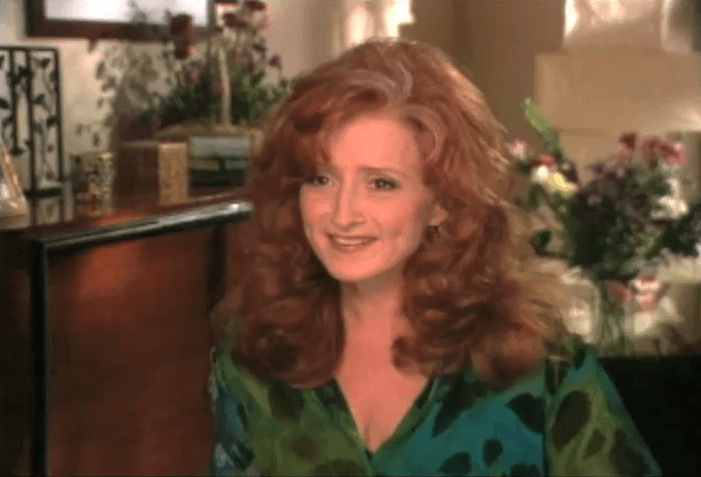 When I got the assignment to do Bonnie Raitt’s Behind The Music, I didn’t really know a lot about her. But as I did my homework, I fell totally in love with both her slide guitar playing, and with her back story. Bonnie started playing guitar as a teen, but only started taking it seriously when she went to Radcliffe, and fell in love with a local music promoter who was also the manager of Son House. It wasn’t long before Bonnie left college and started a masters course in the blues at the feet of the men who had invented it. She is very much the real deal.

This was also my first Behind The Music where the other interviews were equally famous performers. Thanks to Bonnie, I got to meet and spend time with one of my childhood heroes, Jackson Browne, Ruth Brown (really loved her, RIP, Ruth), David Crosby, Melissa Etheridge and Don Was. Just writing that down reminded me of how much fun it was to hang with them.

I got into a pretty heated conflict with the network execs over this act. VH1 came to think that Behind The Music’s success was based on the excesses of the Rock ‘n Roll life style, not interest in the actual artist. In Bonnie’s case, she’d had a lull in her career, and during that lull she drank too much, and slept with some people she wouldn’t have slept with if she hadn’t been drinking. I gave it the focus I thought was appropriate – it is my favorite act in the show – but the network wanted a lot more wretched excess, and ultimately my boss told me the show was a miss because it was too soft. Silly me, I thought my job was to tell Bonnie’s beautiful and moving story, not to try to create controversy when it wasn’t really there. I guess that really does sound naïve, doesn’t it?

Two little things about Bonnie. First, regardless of what VH1 thought, Bonnie loved the show. And when she found out I was making a film the following summer in Indianapolis, where she was coming through on a tour with Jackson Browne, she invited me to the show and to a barbecue backstage afterwards. They both really made me feel like we were old friends, and I really wish I was. They are very cool people.

The other thing is about her marriage to Michael O’Keefe. Usually when you get to the relationship part of the interview, particularly when you’re talking to a married couple, you expect to get a lot of shiny happy talk. But both Bonnie and Michael were quite open that neither was finding their marriage that easy, and I wasn’t exactly surprised when they announced their divorced less than a year after we taped the interviews.