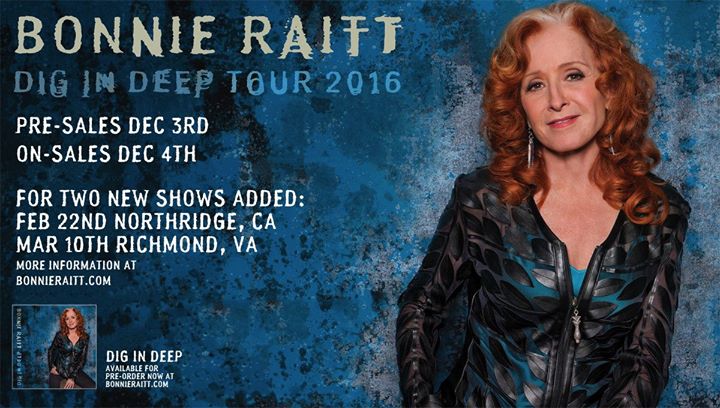 A Los Angeles music icon, Bonnie Raitt is the latest music legend to take the stage in support of KCSN and its annual benefit concert series. Past concerts have featured

A Los Angeles music icon, Bonnie Raitt is the latest music legend to take the stage in support of KCSN and its annual benefit concert series. Past concerts have featured performances by such artists as Tom Petty & The Heartbreakers, Jackson Browne, Stephen Stills, Lucinda Williams, Ryan Adams, Conor Oberst and Sarah McLachlan.

“Bonnie Raitt is one of the most influential artists in our lifetime,” said KCSN General Manager Sky Daniels. “She is a legend in the Los Angeles music scene, and her philanthropic efforts and social activism make her one of rock’s most honored persons. KCSN is grateful for her support in playing our benefit concert.”

Joining Raitt as part of the KCSN benefit concert will be Los Angeles artist Maia Sharp. A CSUN music alumna, Sharp has written, performed and produced songs with such artists as Carole King, The Dixie Chicks and Trisha Yearwood. Billboard Magazine has said Sharp “conjures the allure of yesteryear’s Brill Building luminaries.”

As a service of California State University, Northridge, KCSN offers a 24-hour, commercial-free blend of rock, alternative, soul, blues and Americana, including a wide range of artists such as U2, Petty, Jack White, Arcade Fire, Wilco and Beck. The station’s programming also is available on the station’s HD1 channel and online at KCSN.org.

The Valley Performing Arts Center is located at the southern end of the campus at 18111 Nordhoff St. in Northridge.

Bonnie Raitt – Write Me a Few of Your Lines/Kokomo Blues