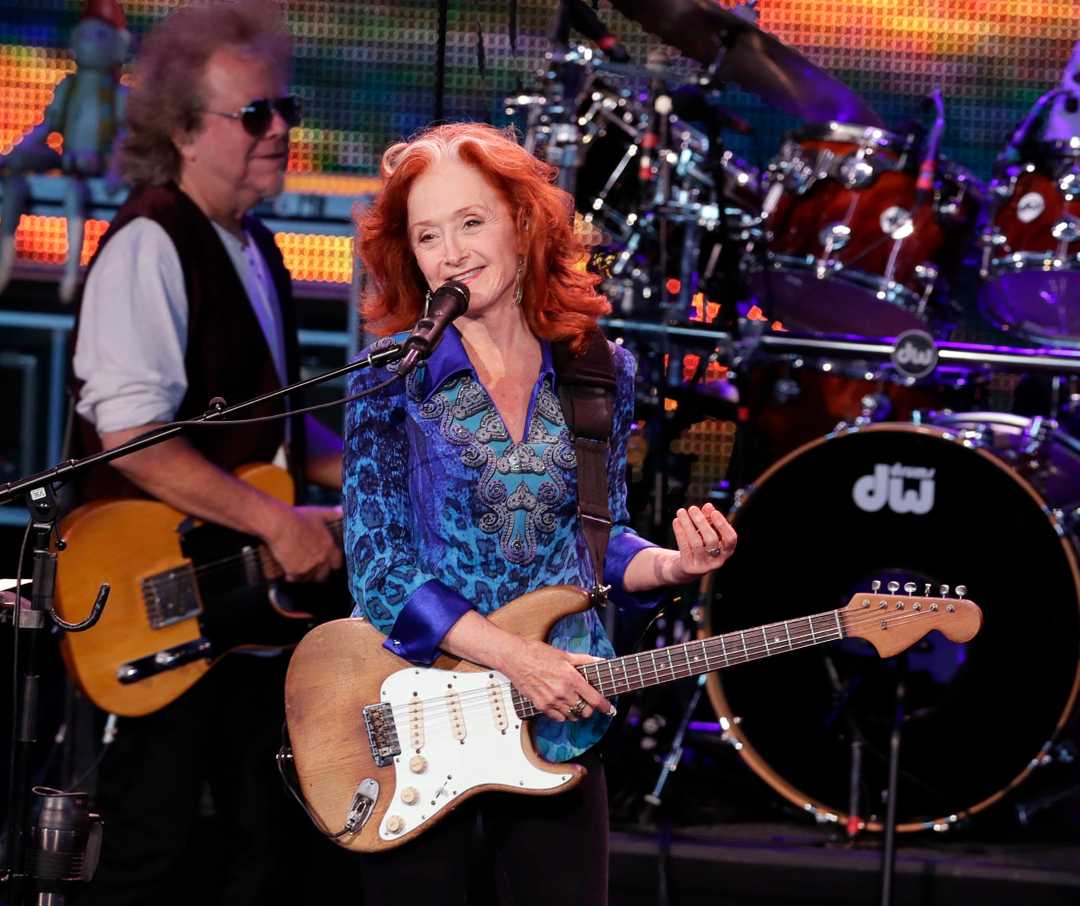 Raitt was less an opening act than Taylor’s partner in crime; they’re friends delighted to be on the road together, and together their performances rang far more true as a double billing.

The show began with an appearance from Taylor, who took the stage and addressed the crowd with a humble introduction: “It’s my great honor and pleasure to introduce to you the woman, who in my opinion epitomizes the musical art of our generation … my dear, beloved friend, Miss Bonnie Raitt.”

Taylor slid into the background as Raitt took her place on the glowing purple-lit stage showcasing the backdrop of a vibrant sunset, she remarked: “We’ve never played this big giant, but we’re gonna fill it up …”

And fill it up she did.

Something To Talk About

Bonnie Raitt performing her 1991 classic at Summerfest as part of her co-headlining tour with James Taylor. Performed on June 28, 2018 at the American Family Insurance Amphitheater in Milwaukee, WI.

Bonnie Raitt and James Taylor jam along to John Hiatt's "Thing Called Love," at Summerfest as part of their co-headlining tour. Performed on June 28, 2018 at the American Family Insurance Amphitheater in Milwaukee, WI.

You've Got A Friend

James Taylor playing his classic hit cover of You've Got A Friend by Carole King. He is on a co-headlining tour with Bonnie Raitt. Performed on June 28, 2018 at the American Family Insurance Amphitheater In Milwaukee, WI.

Carolina In My Mind

James Taylor opening up his set at Summerfest in Milwaukee, WI with his classic hit Carolina in My Mind. He is on a co-headlining tour with Bonnie Raitt. Performed on June 28, 2018 at the American Family Insurance Amphitheater in Milwaukee, WI.

Raitt, who missed the opening leg of her tour with Taylor due to emergency surgery, was in prime form, effortlessly moving between genres – from acoustic blues to funk, R&B and pop – with deft guitar and impassioned vocals.

In fact, her too-short hour-long set was quintessential Raitt, complete with Delta-style bottleneck work, political commentary and a bit of roadhouse rumble.

Raitt has always been a gifted interpreter, magically taking ownership of songs she may not have written but may as well have. And her show at the Amp aptly demonstrated her talent.

Over the course of the next hour, Raitt showcased her prowess on electric guitar with a rollicking, music festival appropriate version of the Fabulous Thunderbirds cover “I Believe I’m in Love” and poured an impressive bit of heart into an acoustic soulful version of “Devil Got My Woman,” a song written by Delta blues singer and songwriter Skip James. She also grooved from behind a keyboard to “Nick of Time,” a song she performed with Arnold McCuller, a James Taylor All-Star Band member and solo artist who has appeared on numerous Raitt albums.

Meanwhile, her trademark slide provided the connective tissue for an ultra-sexy, amped up version of “Need You Tonight,” a song that went beyond simple nostalgia and became something worthy of homage to the late Michael Hutchence. 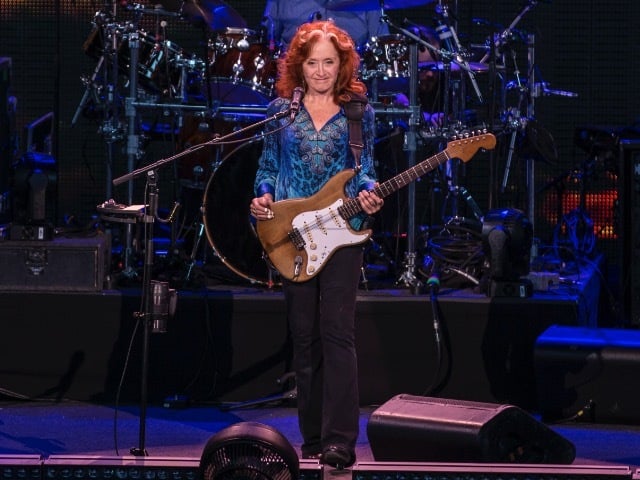 Her commentary was brief, but ranged from political to personal.
Before drifting into the uncannily appropriate “Everybody’s Crying Mercy” by jazz artist Mose Allison, the vocally political singer took a brief jab at President Donald Trump, having noted the sluggishness of traffic caused by his Milwaukee visit, “I wonder how much that cost? I guess we’ll find out …” she noted.

Throughout her 10-song set, she clearly exhibited her 11-time Grammy-winning worthiness while graciously offering nods to numerous Milwaukee musicians – including friend and artist Paul Cebar, who’d featured her as a guest on his WMSE-FM show. 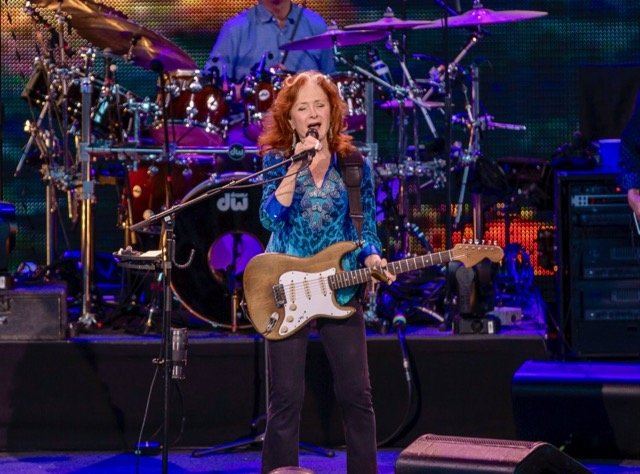 Although the audience took a while to warm up, Raitt got them going with crowd-pleasers like “Something to Talk About,” her raspy vocals purring the lyrics as the crowd sang along. Meanwhile, she dedicated a beautiful rendition of John Prine’s “Angel From Montgomery” to women around the world, including those “separated from their children,” evoking a standing ovation from a formerly seated crowd.

After a fiery jaunt through the Talking Heads’ “Burning Down the House” which brought the crowd to its feet, Raitt wrapped up her set, welcoming Taylor back to the stage.

The two friends took up their guitars and played “A Thing Called Love.” And while their voices didn’t blend perfectly, the admiration and affection between them was palpable. And it reverberated into the audience, the majority of which remained standing, bobbing and tapping their feet in participatory bliss. 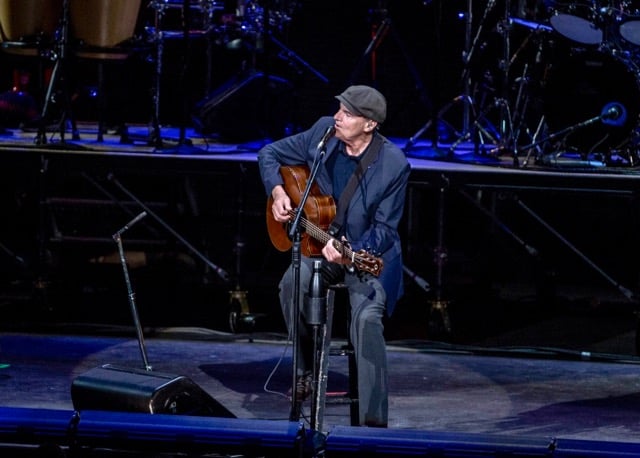 Taylor performed his show with an exceedingly talented group of musicians, including percussionist Steve Gadd and “Blues Brothers” sax player Lou Marini. A moving performance of “Country Road” featured a stirring fiddle solo from Andrea Zonn, while Cuban percussionist Luis Conte added international flair with Latin-inspired grooves on both “First of May” and “Mexico.”

During “Sunny Skies,” the audience was treated to funny little home videos of Taylor’s dog, of which he remarked: “There’s nothing we will not stoop to in meeting all of your entertainment needs.”

There was also amusing profanity. Before performing the danceable, salsa-flecked version of “First of May,” he told the tale of a little ditty his father was known to recite without fail every May Day: “Hooray, hooray, the first of May. Outdoor f*cking starts today.” But somehow, when James Taylor drops an F-bomb, it has a way of coming off vaguely sweet, even church-worthy.

“Handy Man,” a song I knew throughout my childhood only as the “Comma” song, was performed against a backdrop of comic videos depicting handymen of all stripes – some exhibiting the ubiquitous plumber butt, others operating tractors or heavy equipment – experiencing any number of amusingly unfortunate accidents.

There were also more personal selections. Take “Something in the Way She Moves,” a song he performed for the audition which earned him an inaugural contract with The Beatles’ Apple Records. Taylor relayed the story of the audition, which rendered him “clinically” nervous. He also threw a slight barb at George Harrison.

“Paul liked the song enough to sign me to his record label,” he remarked, “and George liked the song so much he went home and wrote it himself,” he noted with a chuckle, a reference to Harrison’s blatant use of the song for the 1969 Beatles hit “Something.”

Despite two hours of largely impressive performances, the show wasn’t without awkward moments. Take for instance, Taylor’s performance of “Steamroller,” during which the 70-year-old Rock and Roll Hall of Famer hammed it up, strutting across the stage with his screaming electric guitar, sometimes upstaging talented guitarist Michael Landau. It was almost a relief when the song quieted and Taylor moved deftly into the ballad, “Lonely Tonight.”

But those moments were largely overshadowed by beautiful musical interludes and impressive harmonies. Taylor’s voice – miraculously unscathed by time and excess – easily danced through the 20-song set without a hitch. And his delivery of moving lyrics, relayed without frill or pretense, gave credence to his reputation as the harbinger of the singer-songwriter era.

The personal nature of his work was evidenced in tunes like the “cowboy lullaby” written for his older brother’s newborn son, “Sweet Baby James.” During his performance, a video pop-up book featuring the lyrics scrolled across the screen, creating a mood that linked the audience to the song in a palpable way.

Between songs, he’d pause to offer generous – and well-deserved – accolades to a member of the band or to marvel at the moon rising over Lake Michigan. And one couldn’t help but realize how much this artist – a man whose complex journey was marked with both challenges and successes – is truly present, living life in each moment.

And even as he sang “Fire and Rain” for what was likely the 35 millionth time, there was the same clarity, the same emotion in his voice that there’s always been. And the lyrics – written at least 48 years – rang as true as ever. 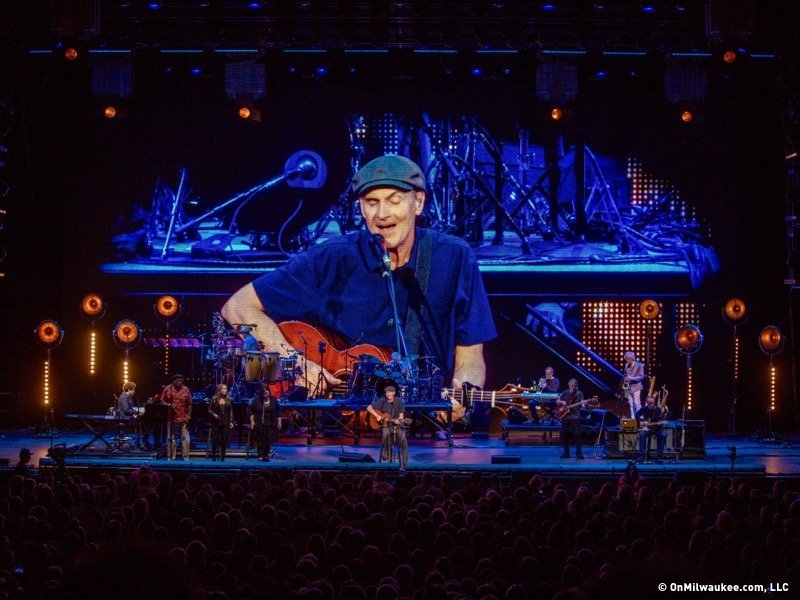 To my surprise, I also found myself beaming during “Smiling Face.” It’s a cheerful song, for sure. But it was the way the video cameras panned the audience, capturing the delighted looks, smiles and moments of surprise as audience members realized that their swaying, singing countenances were being displayed on the big screen.

These moments held reminders that Taylor’s songs, his art, are intimately bound to both the everyday moments and emotions we all experience. It’s what makes his music so relatable. So infinitely singable. So real for so many.

The encore included a rousing rendition of Chuck Barry’s “Johnny B. Goode” during which a hyped up Taylor performed once again with Raitt, who added raspy vocals and spirited guitar licks. That was followed by the infinitely singable “You’ve Got A Friend,” and “You Can Close Your Eyes,” a duet that seemed to highlight the love shared by Raitt and Taylor while offering a soulful and heartfelt farewell to the audience.

It was a fitting close to a concert that reminded everyone that, in an age when music tends toward the homogenized and impersonal, there’s still an awful lot of heart and soul in the world. 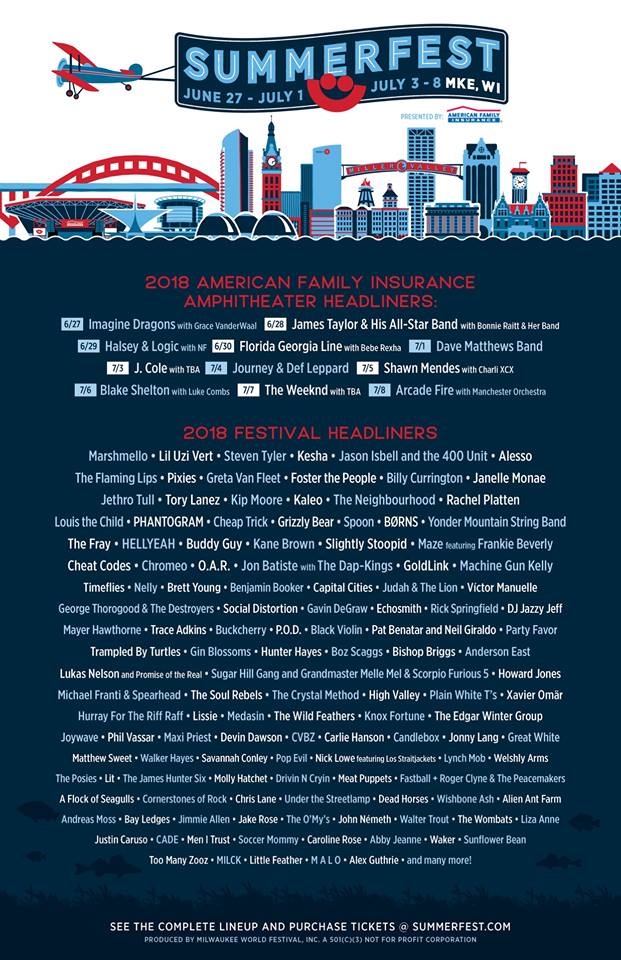 
Bonnie Raitt Remembers Record Exec Joe Smith, Who Signed Her Twice: ‘He Really Nurtured Me as an Artist’


Bonnie Raitt: Mistress of the Blues


Willie Nelson, Bonnie Raitt, and Alison Krauss help pack the Outlaw Fest at the Mann with a 7-hour music extravaganza 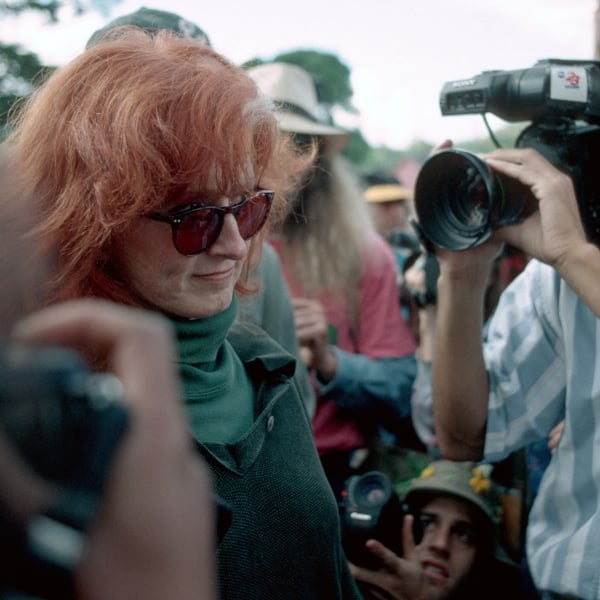 Write me a line...
2019 (C) All rights reserved.
Thank you for your feedback.
It's making the work I put into this website so much more worthwhile. Please keep coming with your questions and suggestions and help. Creating an account and becoming a member of this fan community would be great !
Greetings, Eric
Send Message
We never share your details.
×