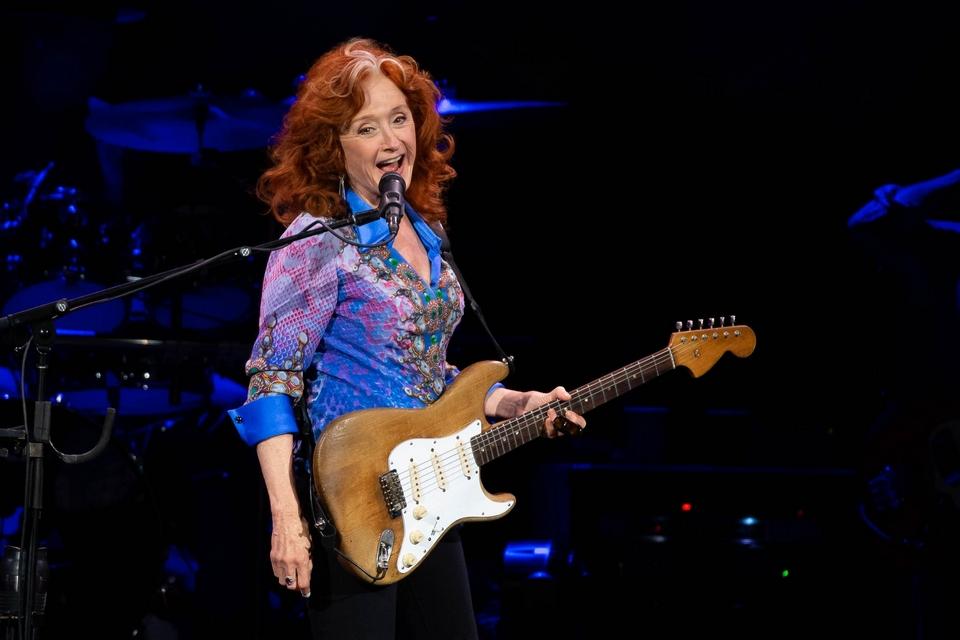 On paper, it’s not necessarily obvious that James Taylor and Bonnie Raitt would be such compatible touring partners that they’d spend a couple of years on the road together. She’s grounded in blues, funk and soul; his core is folk, pop and jazz. Her personality is radiant and gregarious; he’s calmer, a bit more quirky. He mostly plays acoustic guitar, letting his 11-piece crew color the sound; she favors electric, and can take full command when she lets loose with a slide lead.

And yet there’s clearly enormous mutual respect between the two artists. Raitt opens the shows with an hourlong set, but Taylor comes out first to give her a glowing introduction. Wednesday evening at the Erwin Center, Taylor emerged again at the end of Raitt’s set to duet with her on John Hiatt’s “Thing Called Love.” To no one’s surprise, Raitt responded in kind by joining Taylor two hours later for his encore, cutting a rug with Chuck Berry’s “Johnny B. Goode” before sending folks home with the hushed blessing of “You Can Close Your Eyes” (which they’d sung together in this building at a 2017 Hurricane Harvey benefit).

It’s telling that Taylor ended the show on a quiet note — squeezing his 1971 Carole King-penned smash “You’ve Got a Friend” between those two tunes with Raitt — because although he digs pumping up the volume at times with the rock swagger of “Steamroller” and the shiny pop of “Your Smiling Face,” in the end Taylor has always been a balladeer at heart. At 70, he remains one of the best alive, and the professionalism of his performances may be unparalleled.

It’s not just that he has a sterling repertoire to pull from — “Carolina in My Mind,” “Sweet Baby James,” “Fire and Rain,” “Something in the Way She Moves,” “Mexico” — but also that the presentation is nearly perfect. Stage visuals are unpretentious yet exquisite: Five layered rectangle screens of different dimensions float in front of a full-size backdrop, synchronized with a precision that must take an enormous amount of time and effort to get down before the tour begins. And the sound mix on Wednesday was as good as I’ve heard the Erwin Center sound since — well, the last time Taylor played a full show here, in 2016. Sports arenas that double as concert venues are challenging rooms for sound engineers, yet Taylor’s crew makes it possible to hear everyone in the supporting cast clearly.

McCuller also joined Raitt for a song during her set, which included the obligatory but splendid crowd favorites “I Can’t Make You Love Me” and “Something to Talk About” as well as deeper blues dives such as a solo acoustic rendition of Skip James’ “Devil Got My Woman” that she dedicated to Austin singer Ruthie Foster. Raitt has deep ties to Austin thanks partly to her former guitarist, the late Stephen Bruton, and she acknowledged several other locals who were in the house: bassist Sarah Brown, Asleep at the Wheel leader Ray Benson and pop star Christopher Cross. (It was the second Erwin Center shoutout in less than a week for Cross, after Stevie Nicks praised him at Saturday’s Fleetwood Mac show.)

Raitt’s four-piece band was great at getting deep into the groove, especially keyboardist Ivan Neville, of the great New Orleans musical family. The only real downside to her set was that too many people arrived late for her 7:30 p.m. start, which meant a lot of searching for seats that distracted from the performance. Still, it was clear her presence on the bill made a difference in the attendance: The show wasn’t a sellout, but the Erwin Center used its larger south-stage setup, a higher-capacity configuration than the half-room arrangement that was used for Taylor’s 2016 concert.

By Wythe WalkerIf you came of age in the cultural crucible of the late 1960s, like most of the crowd