In a private ceremony yesterday in New York City, eight pioneer rhythm-and-blues artists received a total of $130,000 in grants from the Washington-based Rhythm and Blues Foundation. Maxine Brown, Al Hibbler, Albert King, Jimmy McCracklin, Curtis Mayfield, Sam Moore, the Five Keys and the Spaniels received Pioneer Awards with the honoraria from the nonprofit foundation, funded by major grants from Atlantic Records and Warner Communications. The foundation is charged with fostering wider recognition, financial support and historic preservation of the art form. Ruth Brown, Bonnie Raitt and Whitney Houston were among the presenters in ceremonies at Tatou, a New York restaurant. Mayor David Dinkins declared yesterday “Rhythm and Blues Day” in New York.

According to acting executive director Suzan Jenkins, the foundation has distributed $423,000 to early R&B artists in the past year, most of it for medical or personal help (and some for funeral expenses). The largest amount, $125,000, was channeled through the foundation to Mary Wells after it was discovered the one-time Motown star had throat cancer. Wells recently finished chemotherapy, and doctors say there are no signs of the cancer’s return.

The Rhythm and Blues Foundation was established in 1988 by a $1.5 million grant from Atlantic Records, the interest from which funds the annual Pioneer Awards. Other labels, particularly those that benefited from their R&B artists, were approached to make donations, but so far have not followed Atlantic’s lead, though the label’s parent corporation, Warner Communications, donates $300,000 a year for operating expenses. Last night’s ceremony was sponsored by Sony Music (formerly CBS Records).

While the foundation has had little luck in finding a health plan for early R&B artists, it does have several long-term projects, notably the establishment of a national R&B archive at the Smithsonian Institution and issuance of comprehensive music anthologies from the early R&B years. At last night’s program, the foundation presented a Legend Award to its chairman, Ray Charles. Songwriter Doc Pomus, who has been hospitalized for several months, received a Pioneer Award, and there were posthumous awards to U.S. Rep. Mickey Leland and his chief of staff, Patrice Johnson, for their support of the foundation. 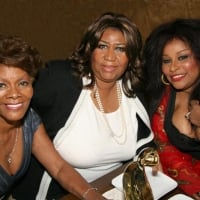