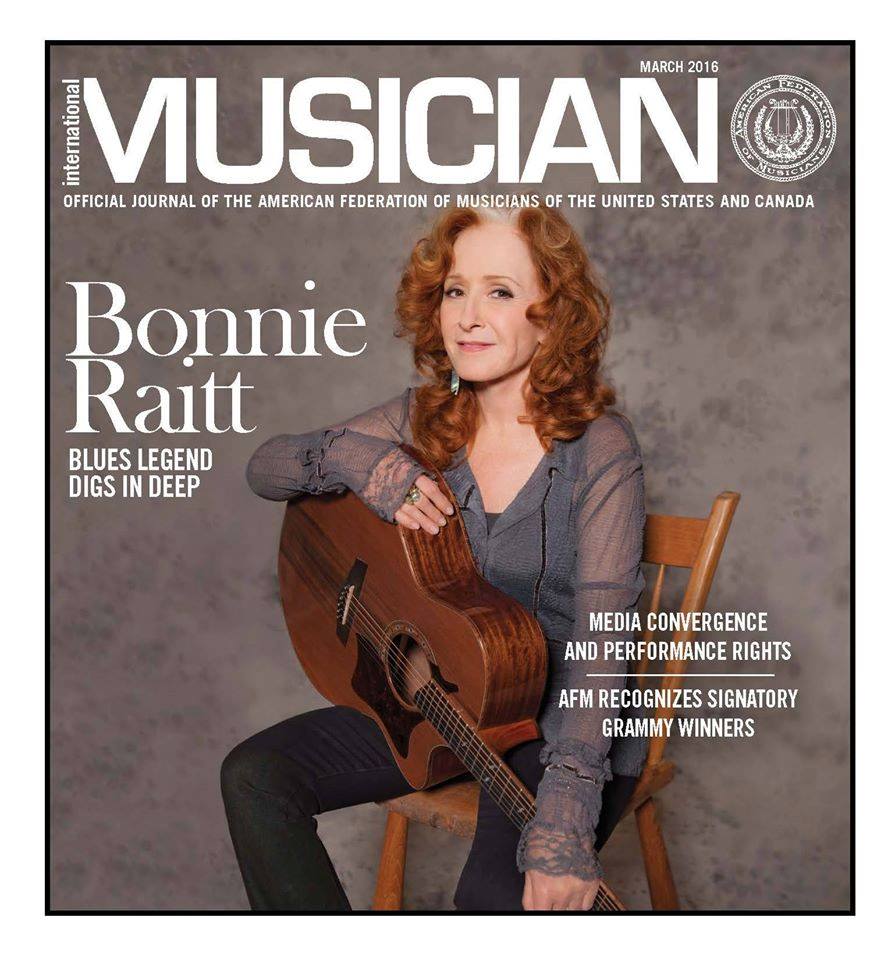 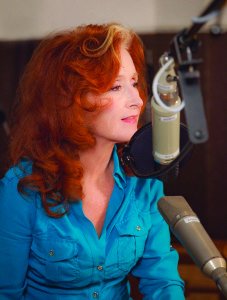 Blues legend, accomplished guitarist, and Local 47 (Los Angeles, CA) member Bonnie Raitt was fortunate to have early opportunities to play with legends of the genre. Throughout her career, the singer songwriter has never been shy about standing up for causes she believes in. For the daughter of musicians John Raitt and Marge Goddard, both music and social activism are in her blood.

Though Raitt started guitar lessons at age eight, her real passion didn’t begin until a few years later when she first discovered slide guitar and the blues. “I didn’t even hear slide guitar on a blues record until I was about 13 or 14. It was a record on Vanguard called Blues at Newport ’63. I turned the record over and combed through the credits,” says Raitt. She soon soaked the label off a Coricidin cold medicine bottle, put it on her middle finger, and began teaching herself slide guitar.

Interested in culture and politics, Raitt began college at Harvard/Radcliffe studying social relations and African studies. Between classes she spent her time playing music at local coffee houses. About three years into her studies, she decided to pursue music full-time.

That was about the same time she joined Local 374 (Concord, NH). “You couldn’t make a record unless you were part of the union [in those days],” she says. “Musicians need to band together to make sure they are treated fairly. There’s power in the union and talking about issues that affect us all—collective bargaining for better deals, health insurance, making sure that people get paid, and tracking is really important.”

Raitt soon found herself opening up for some of her heroes: Fred McDowell, Son House, Muddy Waters, and John Lee Hooker, to name a few. It was a world that you might assume would be intimidating to a young woman, but she says it was just the opposite.

“When I met these older blues artists and they heard me play, they got a kick out of it, just like they were thrilled with all the people who played the blues,” she reflects. “Of course, if you were good they admired you, and if you weren’t good they probably just wrote you off; that was the same for any musician—you either had the chops or you didn’t.”

In fact, the blues musicians were so accepting to Raitt that she feels it gave her an advantage. “I was lucky to have my foot in the door a lot more than other female singers that would have loved to have had a career in the business. I played the blues and that was a little bit unusual. It set me apart,” she says.

She studied from her mentors—how the music fit together, the function of the rhythm section, and which guitar or piano parts were important. She was also schooled in some intangible qualities. “Aside from just soaking up the authenticity, deep groove, and passion,” Raitt says she studied the way band members interacted and the interplay of the rhythm sections. 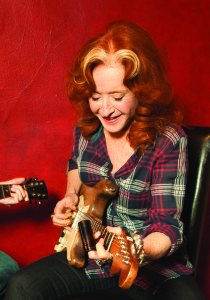 About 45 years later and 20 albums into her own career, Raitt’s latest project, Dig in Deep, still reflects all the emotion and technique she’d absorbed decades earlier. “All the topics of the songs I picked because they mean something to me at this time,” she says. “Having it be the 20th album, I’ve covered a lot of heartbreak topics before. I worked very hard on having a new thing to say and a new way to say it.”

As usual she didn’t shy away from tough topics. For example, she says, “‘Comin’ Round Is Going Through’ was something that was really burning in me to express how frustrated I am with money and politics—how democracy has been hijacked by big business and corporations that are influencing our policy too much. Regardless of your political leanings, I think everybody agrees that the system is kind of broken.”

“I think we are citizens first and we are musicians, artists after that. If you feel strongly that something is wrong, you should speak out as a citizen. We have responsibility, if we have the luxury of being well-known and having a microphone, to at least be informed and passionate,” she says. “I think all of us should speak out if we care about something and we want to help.”

The album’s title takes a line from the lead song, “Unintended Consequence of Love.” “It seemed to describe how deep the band was digging into these grooves,” says Raitt. “There’s something about a unit that has been together this long that just digs deeper. It’s effortless, like an unspoken language amongst ourselves. We instinctively know where the others are going and consequently don’t have to plan the arrangements. It’s very organic.”

Band members include Local 47 members James “Hutch” Hutchinson (bass), Ricky Fataar (drums), and Mike Finnigan (keyboards), and Local 257 (Nashville, TN) member George Marinelli (guitar). Raitt has played with Hutch and Fataar since the early ’80s. Marinelli has played guitar with Raitt on and off since 1993, and has been a permanent band member since 2000. And even though the newest member, Finnigan, has been with the band for just four years, Raitt has known him since the ’70s.