You expect to hear the names of such folk music landmarks as Woody Guthrie, Leadbelly and the Weavers invoked at a folk festival. But Elvis Presley?

It was Woody’s son, Arlo Guthrie, who brought up Elvis during the opening day of the “Troubadours of Folk” festival Saturday at UCLA’s Drake Stadium–and his story and song proved one of the most illuminating moments in the sometimes unwieldy but generally endearing 11-hour affair, which ended around 10 p.m.

Joni Mitchell and John Prine contributed the day’s most rewarding performances, and guest appearances by Bonnie Raitt and Tom Petty added glamour, but Guthrie’s story about Elvis defined the magic that is folk music.

Guthrie told of being with folk music icon Pete Seeger at a European festival after the fall of the Berlin Wall. Knowing that many in the crowd of 30,000 couldn’t speak English, Seeger sang folk classics so familiar around the world that the audience had no trouble singing along.

This is a nice John Prine concert recorded by Rick Williams. John introduced “Ain’t Hurtin’ Nobody” as a new song, written just a couple of weeks ago. Also nice to hear Bonnie Raitt joining Prine on a couple of songs.

After doing the obvious ones, including “We Shall Overcome,” Seeger good-naturedly challenged Arlo to come up with some more folk tunes with similar universality. Seeger, a folk purist, bristled when Guthrie said he was going to sing a Presley song.

As Guthrie began “Can’t Help Falling in Love,” the story went, the audience joined in as easily as before. Guthrie glanced over at Seeger, who was aghast. However, Seeger then slowly stepped to the microphone with his banjo–and began playing the song that he, too, knew so well.

The point, Guthrie said Saturday, is to forget all the definitions of folk music–and the snobbery that grows out of the idea that the music is the private property of a select group of artists or fans. One should simply look for songs that bind people together by underscoring their mutual humanity and heart.

More photo’s of the festival…

Guthrie then sang the Presley ballad and was joined by much of the crowd, which was estimated at 6,000–a turnout probably reduced from the organizers’ 15,000 goal by the threat of rain.

Saturday’s lineup–ranging from Janis Ian and Ted Hawkins to Leon Redbone and the Kingston Trio–echoed the message of Guthrie’s story. In fact, the show, which was taped for a PBS special, served as such a valuable primer on the breadth of folk music that it was fitting that the event–with its accompanying crafts exhibits and issue booths–was held on a university campus.

In her well-received, mid-afternoon set, Judy Collins touched on both matters of the heart and the conscience, opening with the romantic longing of her ‘60s hit “Someday Soon,” then focusing on the idealistic “Last Night I Had the Strangest Dream.”

The Folksmen, who followed, are the Spinal Tap gang in the striped shirts associated with the Kingston Trio and with the slightly archivist aura associated with the collegiate, hootenanny boom of the ‘60s. While in the right context the humor may prove as uproarious as the trio’s classic assault on heavy-metal music, it seemed underdeveloped Saturday.

Roger McGuinn, who was a Chicago folkie before moving to Los Angeles in the mid-’60s and helping pioneer folk-rock with the Byrds, was joined on various numbers by Richard Thompson, Odetta and Petty as he exhibited a winning respect for the folk music form on songs from both his Byrds and solo days.

After Guthrie, the Jefferson Starship delivered an “unplugged” edition that may reflect some wing of folk music. But there was no need to take more than an hour (including stage set-up time) to document their ham-fisted approach on a day when far more important artists were limited to 30 minutes or less.

If there were strong nostalgia components to many of the day’s performances and a strong ‘60s-wannabes vibe to the mostly thirtysomething and above crowd, Eric Andersen injected a ‘90s reality with a striking new song about the rise of neo-Nazi sentiments in Europe.

Similarly, the sets by Prine and Mitchell–two master songwriters–included a few old favorites, but concentrated on new material.

Backed by a four-piece band that included Benmont Tench on keyboards and Howie Epstein on bass, Prine sang two songs from his last album, the Grammy-winning “The Missing Years,” and one new, unrecorded tune. He was joined by Raitt on the new song and on “Angel From Montgomery,” which she recorded years ago.

It was late (almost 9 p.m.) and cold by the time Mitchell came on stage with her guitar for a rare performance that featured several new, unrecorded compositions–tunes that confirmed that Mitchell, whose “Night Ride Home” album last year was her most acclaimed in years, is going through another productive period.

In a surprise twist near the end of her set, she even gave Arlo Guthrie something to tell Pete Seeger about. She sang a song called “How Do You Stop,” which she learned from a 1986 album by another great folk-singer . . . James Brown.

Bonnie Raitt and Mavis Staples Roar Through a Heroines’ Double-Header at the Greek: Concert Review

How Bonnie Raitt Fine Tuned Her Style With ‘Give It Up’

5 Deep Cuts From Bonnie Raitt You Should Be Listening To 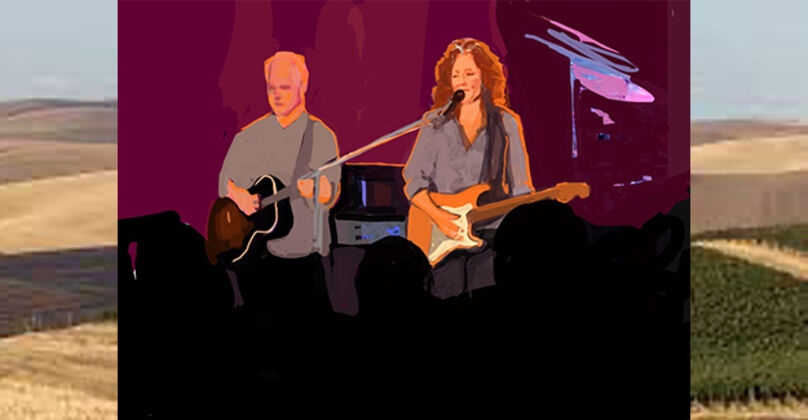 Bonnie Raitt and Mavis Staples in a WW Bubble