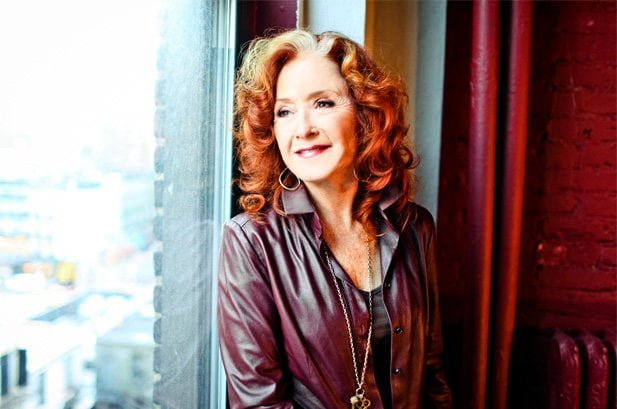 Bonnie Raitt – singer, guitarist, Grammy winner, Rock and Roll Hall of Famer – has seen her share of great music years, and 2012 has been one of her best. With the success of “Slipstream,” her first new album in seven years and self-released on her new label Redwing Records, a massive 80-date tour, and even a lifetime achievement award for performance from the Americana Music Association all coming to pass this year, Raitt ( @TheBonnieRaitt) sat down with Billboard editorial director Bill Werde ( @bwerde) for an in-depth seven-part video interview.

The wide-ranging conversation found Raitt discussing how she crafted “Slipstream” with Joe Henry and others, giving her thoughts on how much famous fans like Katy Perry and Adele mean to her, sharing memories from her start learning from blues legends like Son House while she was studying at Harvard, and more. The blues-rock legend goes on to talk candidly about the meaning of feminism, and look back on the pivotal moment of 1989’s “Nick of Time” and forward to a future for which she’s already got new songs (via Joe Henry) and world tour plans (Australia, New Zealand, England) afoot.

“When I hung out with these blues guys it was just such an incredible gift,” Raitt says. “I was right at their feet. . . I told the [Harvard] admissions people, ‘I’m going to take a semester off and hang with these guys. They’re in their later years I want to be able to learn from them.'”

Part One: Leaving Harvard after meeting Son House to work in the music business; deciding to be a full-time musician during the 60s blues revival; getting signed.
Part Two: Early days on Warner Bros. with no pressure for hits; success of 1972 album “Give It Up.”
Part Three: “Nick Of Time” success and Grammy wins.
Part Four: Feelings about Katy Perry, Adele, Bon Iver’s Justin Vernon and others being fans of her music; working with Joe Henry on “Slipstream.”
Part Five: Feminism, politics and activism.
Part Six: The making of “Slipstream” after the deaths of many close to her.
Part Seven: Launching her label Redwing Records, world tour plans.

“There was a whole blues revival going on,” she explains. “Butterfield, Johnny Winter, Eric Clapton, the British invasion. . . I didn’t really look at it in terms of male and female. But I think because I played bottleneck guitar and Robert Johnson songs and there weren’t other women doing that I really got my foot in the door.”

In the beginning, Raitt says she thought, “I like being an album artist. I’m not going to go after hit singles. . . I don’t care about being a star.” She adds that in those days Warner Bros.’s Joe Smith told her, “‘We make our money from Deep Purple and Black Sabbath, and we fund the Meters and Allen Toussaint and Little Feat and the Grateful Dead and people like you. . . We don’t expect any of you to have hit singles.’ They never told me what to record or when or with whom. No pressure.”