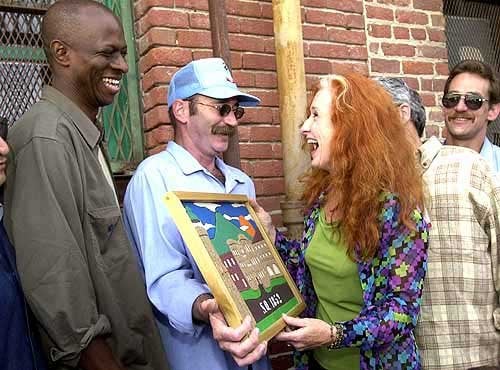 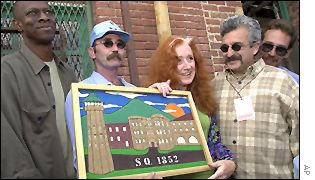 Bonnie Raitt is given a picture before the concert

Country blues singer Bonnie Raitt has played a free two-hour concert at San Quentin State Prison, in the US.

The singer performed in front of about 2,000 male inmates in the prison yard.

In an interview before the show, Raitt spoke about her addiction to alcohol and drugs, which she called “the blues disease” .

The concert on 23 June was her first within the walls of a prison, she said. 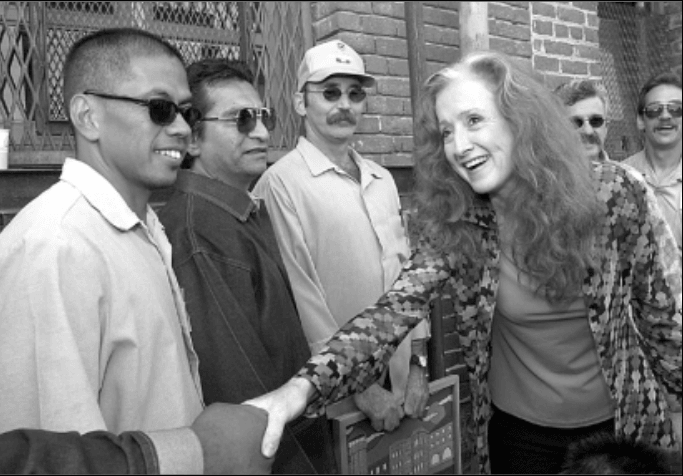 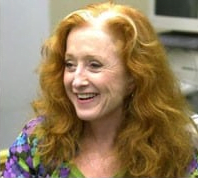 “We’re all here together,” Raitt said. “We’re all just one infraction away from being in a prison ourselves. I could’ve been here in a minute.”

She added: “I could’ve been too angry and if I had a gun in my hand instead of a telephone or a guitar, I’d be right in here.” Raitt says she has been sober for the last 14 years.

Raitt gave the concert because she wanted to help other inmates at the prison to stay sober.

“If I can give some help to somebody who’s struggling, whether it’s with alcohol or heartbreak – music can heal,” she said.

Raitt has volunteered for Bread and Roses, an organisation which provides free live entertainment to people who live in institutions or are otherwise excluded from society.

“This is a community that deserves to have music,” Raitt continued. “I think spiritually and personally it has a transformative effect on both the artist and the people that we’re playing for.

“It just kind of ups the humanity… it’s a soul-to-soul connection.” 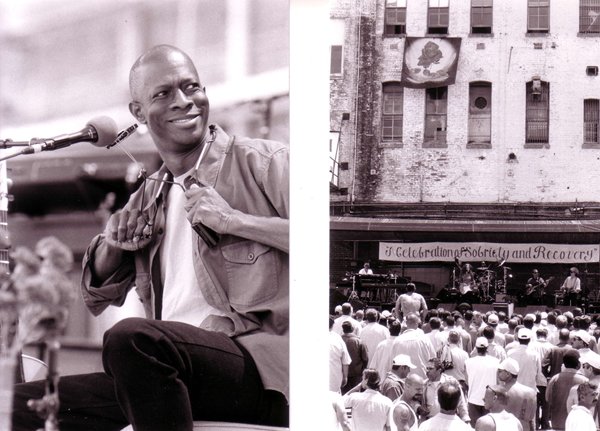 Keb’ Mo’ at San Quentin 6/23/01 with Bonnie Raitt for “A Celebration of Sobriety and Recovery”.
© Ken Friedman, Courtesy of Bread & Roses

Prison warden Jeanne Woodford was delighted with the impact of Raitt’s concert. “The idea isn’t really to entertain, although entertainment is a part of it,” she said.

She added: “It really is to send a message – that clean and sober is the way to go. I think we have the right people here to deliver that message, people that these guys will listen to.” 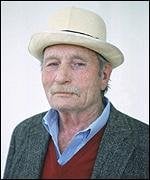 One inmate, recovering heroin addict Brad Bennetto, welcomed contact with the outside world through concerts.

“We’re still part of society,” he said. “Maybe we’re the undesirable part, but you’re going to have to deal with us eventually.”

San Quentin, established in 1852 in Marin County, is California’s oldest and most notorious prison. It also contains the only gas chamber and death row in the entire state of California.

Previous inmates include Eddie Bunker, who won the Macallan Dagger award for Non-Fiction for his memoirs.

The book, Mr Blue, tells of the time the US actor and writer spent in San Quentin prison before his successful writing career began.