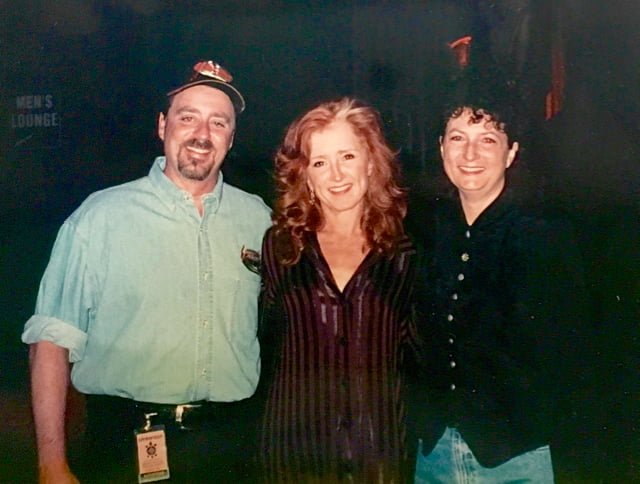 This is my love letter to Bonnie Raitt – the other woman in my life.

I am here in Santa Barbara with Deb, celebrating our 35th wedding anniversary, having driven up the coast 100 miles from our home in Redondo Beach to see Bonnie play at the Santa Barbara Bowl.

Bonnie doesn’t know I’m here. I didn’t let her know I was coming. Didn’t even send her a text or leave a voicemail.

Even if I had it wouldn’t have made any difference. She wouldn’t care, believe me. How could she? Bonnie Raitt doesn’t know me. She doesn’t know I’m here to celebrate our 35th anniversary.

She doesn’t know that on my birthday next month it will be the 36th anniversary of the day in 1980 I proposed to Debra at a Bonnie Raitt concert at the Universal Ampitheatre. Not just any Bonnie concert – the one with Sippie Wallace!

Bonnie doesn’t know that six years earlier, Deb helped produce a performance Bonnie did at the Kiva while Deb was a college student at Michigan State in 1974. Or that the poster from that gig at the MSU Kiva hung proudly in Deb’s Seal Beach apartment when I first met her.

Bonnie has no way of knowing she was the indelible and non-stop soundtrack for my earliest years in California, as a 20-year-old seeking movie screenwriting fame and fortune in Hollywood.

It was 1977 and I was living on Romaine Avenue off of Vine, between Melrose and Santa Monica, in the gritty low income side of Tinseltown. I roomed with my screenwriting partner who had 4 cassette tapes and a stereo tape deck.

Two of those cassettes were Bonnie’s first two albums and songs like “Women Be Wise” “Finest Loving Man” “Big Road” “Give It Up Or Let Me Go” “I Know” “Love Me Like A Man“ and “You Got To Really Know How“ were not only giving me a lesson in the blues, but were also preparing me to appreciate and cherish strong, talented, independent women, who can and will give as good as they get. Just like the one I fell in love with and married 35 years ago.

So maybe it’s no surprise that I have spent the last 39 years choosing to work with and befriend exactly those kind of women – in every area of my life. Or that today at 58, the vast majority of my closest friends and colleagues are almost exclusively women I admire, respect and want to spend my time with.

I know Bonnie wouldn’t take the credit for any of that. How could she? We’ve never talked about it.

Just as we’ve never discussed how much I always loved watching Bonnie sing with her father, Broadway legend, John Raitt. They sang duets at almost every Los Angeles area concert she played for years. The joy they shared filled the hearts of all who heard them. And they meant something uniquely special to me.