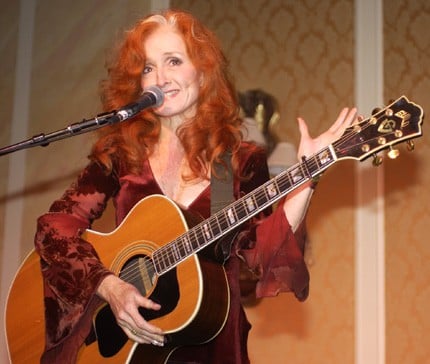 The people who show up at Bonnie Raitt shows these days are white, married, and between the ages of 40 and 60. The only teenagers I saw were two blond chicks that sat next to me and left after the third song. There were also two twentysomething black lesbians in the audience. Aside from myself, these were the only twentysomethings in view, and the only black folks period.

From the stage, Raitt never comments on the whiteness of her audience, though she seems very aware of their age. Early in the set, after a blazing, bloozey “Talk To Me,” she said: “The best part of getting to be this age is not sweating the small stuff.” Big cheers — people here know what she means. Then, to fewer cheers: “Still sweating the big stuff, though.”

Raitt made it pretty clear what she meant by “big stuff” over the next few songs. She doesn’t worry about love, doesn’t worry about dying — but singing “I Will Not Be Broken,” an eerie swamp song built around sparse, desolate guitar lines and fishing metaphors, she dedicated the proceedings to the still-homeless from New Orleans, and riffed modestly about climate change. The social responsibility rap has never been as offensive from Raitt as from some of her contemporaries (say, Don Henley or Carly Simon) — probably because of all them dues she’s paid. Starting as a Boston folkie and toiling away the decades as an electric rural blues mama more interested in that big American sound than that big American paycheck, you always got the sense that she meant what she said, and not just for the moment. She’d also apparently invited a lot of SoFla’s Everglade-conservationist biggies to the show’s front-row and arranged for tables in the lobby to let them to pass out their literature, which makes you figure her involvement might be more than a matter of rich-white-lib guilt.

But it’s not her social responsibility rap that makes or breaks Raitt’s show: it is, as you’d figure, the music. Raitt seems to make her noise effortlessly, and on record, her ease too often makes for an overly casual, almost AOR vibe. Live, her facility has the opposite effect. The whole show would have gotten a boost from increased volume — during the concert, I found I could talk to my date without raising my voice — but it didn’t matter much. Good blues and gutbucket country are commanding genres, and most performers are either overpowered by them (Janis) or else are so worried about getting swept away that they suffocate the music beneath its own formal earmarks (Dr. John). Raitt has neither problem; it seems like she’s spent all her life chasing this music, and now she’s hell-bent on sharing the wonderful things she’s found.

One of those wonderful things is John Prine’s “Angel From Montgomery,” which Raitt’s been performing for years and is finally getting to the bottom of. Her version’s always been affecting; on Wednesday, it was a revelation. When she sang “If dreams were thunder/And lightning was desire/This old house, it would have burned down/A long time ago,” the way she enunciated the word “old” and the phrase “long time ago” was almost preternaturally expressive. It made you think you didn’t really understand age or the passage of time until you’d heard her sing those words. There were a lot of years in that voice.