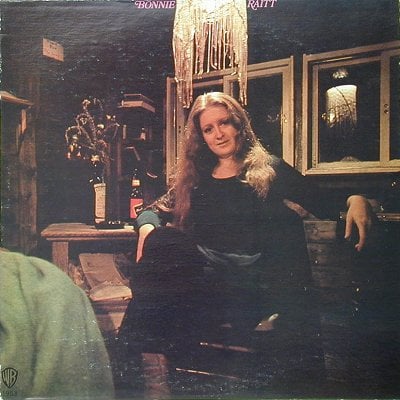 Following the 1970 deaths of Janis Joplin and Jimi Hendrix, modern blues had suffered immeasurable loss. Furthermore, with the end of Cream in 1969, popularized blues forms were severely lacking, especially amongst the females, who had mostly established themselves in pop soul, the softer side of folk rock, and early a.m. pop. So, in comes a young Bonnie Raitt to keep her beloved blues alive, and to show the white girls how it’s done.

In 1971, Bonnie Raitt released her eponymous debut album, Bonnie Raitt, ensuring her a place amongst the best of the 70s.

This was not the psychedelic electric blues of her aforementioned brethren. This was a return to roots with a hint of the smoothness of the 70s. The wailing of the electric guitar is replaced with honky tonk piano, rustic down home acoustic guitar, swampy harmonica, and sex-infused horn blasts. What you get is the feeling of a late night stroll down Bourbon Street and a chance stumbling into a blues club full of perfectly greasy sleaze and southern fried attitude.

The album begins with “Bluebird”, a song Stephen Stills wrote for his Buffalo Springfield’s Buffalo Springfield Again from 1967. The track’s unpolished blues band intro screams of the 1950s Chess era. Raitt’s vocal is first heard and immediately apparent is how well-studied she is in the blues tradition. Her inflections are appropriate, unpretentious, and deep from the pit of her gut – much unlike the average modern R&B run. At halfway, we are presented with a combo of scat singing and lustful horn drives, perfectly accenting the melody.

Tradition is renewed on the Ray Charles-style “Mighty Tight Woman”, with its 12-bar piano blues shuffle. Written in 1926 by the early feminist blues singer Sippie Wallace, the absolutely sleazy yet heartfelt lyricism of “If you’re a married man/You ain’t got no business here/Cause when you’re out with me/I might make your little wife shed a tear/Cause I’m a mighty tight woman/There ain’t nothing, nothing that I fear” is accompanied by a piano-acoustic guitar interlude later joined by deep Delta-derived harmonica. Raitt’s vocal is pure seduction, leaving little to the imagination; yet, no one’s complaining and no one should.