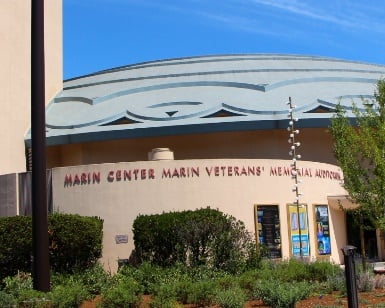 AFTER BEING ON the road for most of the past two years, an emotional Bonnie Raitt sang her heart out for a sold-out hometown crowd Wednesday night, her first show in the Marin Veterans Memorial Auditorium.

“I’m so happy to be here,” she told the audience, strutting onstage, looking fighting trim in snug-fitting jeans and a glittering, rust-colored top that matched her signature red mane with its trademark silver streak. “I have so many friends out there, and I feel really comfortable here.”

Chatty and charismatic onstage, she noted that this was the first time she’d played Marin’s largest concert hall.

“I’ve come here for a medical qigong lesson,” she joked, adding, “It’s the slowest I’ve ever moved in my whole life. But I was instantly healed.” 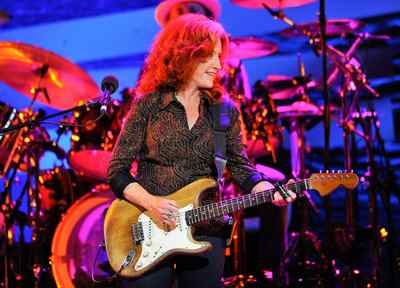 Between songs, a woman in the audience yelled, “We love you, Bonnie,” and seemed to be speaking for what was clearly an adoring audience of 2,000 mostly middle-aged fans.

Reveling in performing for a such a neighborly group, she dedicated songs during the evening to her celebrity pals Peter Coyote and Maria Muldaur, both in attendance.

“I haven’t seen a lot of my friends in a long time,” she said at a green room reception after the show. “It’s kind of emotional.”

Since the release of her 19th album, Grammy-winning “Slipstream,” in the spring of 2012, the rock and roll hall of famer has been touring relentlessly in the U.S. and Europe. But for a number of weeks she’s been home in Marin, taking a breather before leaving again on her current fall/winter U.S. tour, which began at the Hardly Strictly Bluegrass Festival in Golden Gate Park on Oct. 4 and continues in cities she missed on last year’s tour, until the holiday season.

“It’s been nice to sleep in my own bed for a couple of nights,” she offered, casually telling the audience that she spent the day hanging out with friends, doing her laundry, packing.