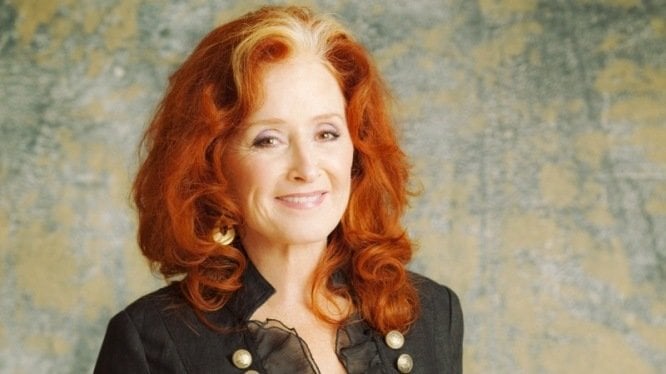 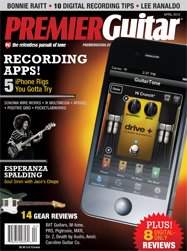 While teaching herself to play acoustic guitar as a teenager in the late ’60s, Bonnie Raitt—now world-renowned for her sultry voice and bracing electric slide prowess— dreamt of leaving her native California and joining the Greenwich Village beatnik scene. As soon as she was old enough, she left her parents—Broadway star John Raitt and pianist Marjorie Haydock—behind to head east and plant her musical roots in the burgeoning folk activist movement.

From there, Raitt tapped into a wide array of influences, with a big turning point coming when she befriended influential blues promoter Dick Waterman while she was in college. Waterman gave her the opportunity to share stages with blues gods like Howlin’ Wolf and Mississippi Fred McDowell, which no doubt left an indelible impression on the blossoming slide player. 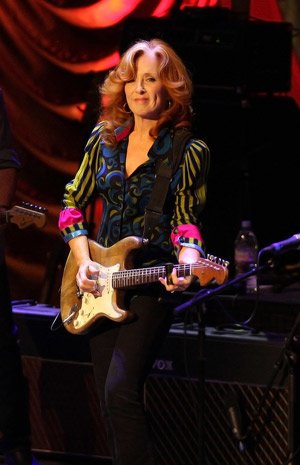 Bonnie Raitt bought her famous “Brownie” Strat for $120 in 1969 and has played it at every gig since. © Buzz Person

Despite such beginnings, Raitt’s road to superstardom was anything but easy. While a 1970 gig with McDowell led to a record deal with Warner Bros., she experienced only moderate commercial success with the label. Her first hit didn’t come until 1977’s “Runaway,” and she was eventually dropped in 1983. She struggled with addiction until Stevie Ray Vaughan’s own recovery in the mid-’80s prompted her to get clean. Not long afterward, Raitt released the album that changed everything. Released in1989, Nick of Time won her three of her nine Grammys to date and set her on a path toward her 2000 induction into the Rock and Roll Hall of Fame. In the process, Raitt went on to become the first woman to have a signature Fender—an offer she originally turned down because she was uneasy about putting her name on a product. (Ever the activist, Raitt used the profits to create the Bonnie Raitt Guitar Project, providing guitars to underprivileged kids in more than 200 Boys & Girls Clubs of America.)

Slipstream, out this month on Raitt’s new Redwing Records label, is her first album in seven years—although she’s been far from dormant in the interim. Much of that time was spent on the road, including on a stint with Taj Mahal before her brother was diagnosed with a second brain tumor. She took care of him until his passing, and soon afterward one of her good friends passed away, prompting Raitt to take time off for the first time in more than a decade.

The incessant road warrior’s hiatus lasted only a year before things started pulling her back toward her creative muse. She ended up in the studio much sooner than originally planned after meeting with producer Joe Henry to see if their styles blended. What was originally supposed to be a couple-song jam turned into an entire album. “Halfway through the first song,” Raitt recalls, “we knew we had something very magical.”

Raitt says she can’t put into words exactly how she knows when a song is right, but she recently told Premier Guitar her approach always seems to have a way of illuminating her life. She also shared why the guitar is her vehicle of choice, how newer artists like Bon Iver inspire her as much as Muddy Waters and John Lee Hooker, and what her advice is for guitarists trying to find their voice.

You picked up your first guitar—a Stella acoustic—at age 8. What made you stick with it?
I grew up in a very musical household, with my mom playing piano all the time for my dad’s rehearsals. So there was a role model for me, with my dad singing these great Broadway scores. Him being a Broadway star was a great gift for us to be able to see what that world was like. And the message of playing music and getting paid for it— doing something that you not only love, but that doesn’t even seem like work—was not lost on me. I must’ve tucked it away and then remembered it when the opportunity came years and years later to play music for a gig.

You’ve said before that electric guitar burns inside of you. What still turns you on about the instrument?
It really sounds like a human voice. The electric guitar will sustain a note, especially a single note, much longer than an acoustic will. And then when you play slide—which is so much like a human voice—you can work the amplifier and the overdrive. Now I use a compressor when I play slide, and with that you can sustain a note as long as your emotions will hold. It’s like surfing— you can ride that wave of emotional intensity and taper it off and build it up, depending on how you work your volume knob. It’s really an exciting way to express yourself. So electric guitar, for me, has the raunch and the beauty that more openly reflects the range of emotions I want to get when I’m singing and playing. It’s much more expressive to me. And that’s what keeps me going back.

The solos on your new rendition of the Dylan tune “Standing in the Doorway” have that same lyrical quality— they sound like someone crying.
Yeah, and then to have pedal steel behind me. I rarely get to do that. Greg Leisz is one of my heroes, and to be playing with Bill Frisell and those guys was such an honor. One of the great things about slide guitar is that I found I could go to Cuba and play with musicians there, and then I went to Mali, Africa, where the blues was born, and within a day I was playing with those musicians—because it doesn’t matter whether you know all the chords if you know your way around with a slide. It’s such a monophonic instrument: You can sit in with the Chieftains on slide as well as you can Cuban and African music. When your own lungs literally run out of air, you can take the slide guitar and add that other voice.

Bonnie brings at least three of her signature Fender Strat prototypes on tour to accomodate the open slide tunings she uses on different songs. © Sioux Nessi