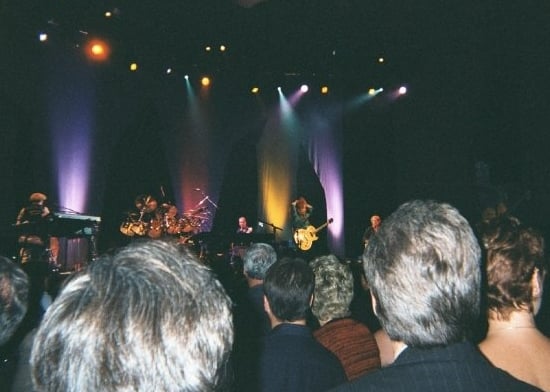 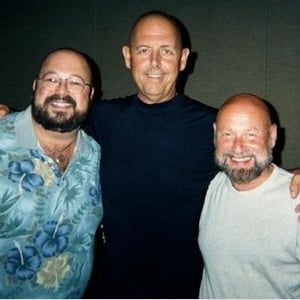 Remember when Bonnie Raitt played CEDIA Expo 2001? The star payed tribute to her integrator brother Steve Raitt, who was dying of brain cancer—so everyone thought.

“Little did we know at that time that his ‘farewell tour’ was actually just a visit with his many friends in the industry,” says Louis Sall of California Audio Technology. “The CEDIA show was fantastic.”

Steve Raitt, an integrator with the former ProLine and a renowned sound engineer/mixer worked with many local bands in the Minneapolis/St. Paul area. He passed away earlier this year. Bonnie Raitt returned to the Twin Cities last month to dedicate a concert to her brother during the Minnesota State Fair. 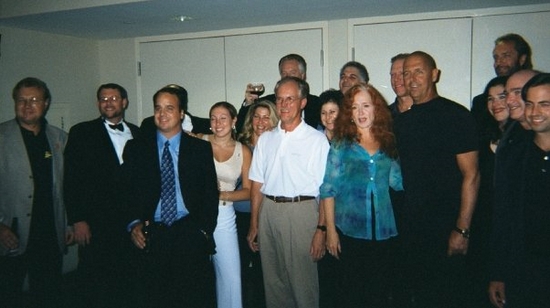 Steve and Bonnie Raitt with the who’s who of CEDIA

Bonnie Raitt is all emotions at grandstand show

Every time Bonnie Raitt performs in the Twin Cities, her older brother, Steve, a local music producer, sits in on one song. On Thursday at the State Fair grandstand, Steve, who died in April of brain cancer, informed nearly every song in a remarkably emotional and unforgettable evening.

His little sister’s slide guitar was darker and moodier, her emotional ballads were more deeply felt (with Raitt on the verge of tears a couple of times), and her excessive chatter was filled with sadness, celebration and many things Minnesotan, from shout-outs to Steve’s friends to a mention of the previous night’s walleye dinner to an expression of her love for the Minnesota State Fair.

After Taj Mahal’s opening exploration of various shades of the blues, Raitt, 59, took the stage and dedicated the show to her brother, saying, “As far as I’m concerned he’s standing right here with me.”

Under these extremely personal circumstances, she relied often on Twin Cities keyboardist Ricky Peterson, who joined her band this year and was one of Steve’s best friends, to lift her up musically and spiritually. She sat next to him at the keyboards singing the lump-in-her-throat “Nick of Time,” which caused her to well up and, in the end, literally lean on Peterson and then kiss him on the lips.

After her stinging slide solo to end “Love Sneakin’ Up on You,” the song Steve used to always sing with Bonnie, she closed her eyes and blew a kiss to the sky. Then she reached new emotional heights with her always penetrating hit ballad “I Can’t Make You Love Me”; afterward, she slunk across the stage and gave Peterson, who had ended the piece with a soulfully jazzy solo, a long, long kiss.

At that point, Raitt summoned out Mahal and his Phantom Blues Band for a two-band jam. “The gloves are coming off,” she declared, “and all the sadness put aside.”

Raitt relished playing with a horn section for a change, and she clearly dug duetting with Mahal, a friend of 40 years but a first-time tour mate. They got playful on the sassy medley of “Tramp” and “Scratch My Back,” and tore it up on her snarling “Gnawin on It” (dedicated to Peterson and his wife, Lu) and the rockin’ “Comin’ Home.”

Raitt has been highly emotional at the State Fair before — in 1990 on the night after her friend, guitar hero Stevie Ray Vaughan, died in a helicopter crash, and in 1998 when her mom sang with her for the first time in public (which Raitt mentioned on Thursday).

But, on this 100th anniversary of the grandstand in front of 7,275 people, Raitt showed how her blues/rock/pop/R&B music, filled with pain and joy, was the perfect way to grieve and celebrate her love of her brother and best friend.

How emotional was it for Bonnie Raitt at the State Fair on Thursday?

She cried during the fireworks after her show, she told me a short time later. She said it was particularly tough on Wednesday when she went on Lake Minnetonka with a bunch of friends of her older brother, Twin Cities producer Steve Raitt, who died in April of brain cancer.

She admitted that there were a couple moments onstage Thursday where she had to summon Steve for emotional rescue to get through a poignant song. She said she’d experienced a similar type thing when her father, Broadway star John Raitt, had died and she had to sing shortly after his passing. She merely thought of him when she was overcome with emotion.

Raitt’s teaming with longtime friend but first-time tourmate Taj Mahal made the structure of the evening different. He and his band opened (loved the swinging instrumental “Seven Eleven” and when he said “Fishin’ Blues” should be the Minnesota state song), then Raitt and her band performed; Taj sat in with her on a couple of acoustic numbers and then he and his band joined her for seven songs at the end.

Sho Do
Thing Called Love
Nick of Time
Your Good Thing Is About to End
Good Man Good Woman
Satisfied (acoustic w Taj)
Done Changed My Way of Living (w Taj)
Angel from Montgomery
I Will Not Be Broken
Something to Talk About
Love Sneakin’ Up on You
I Can’t Make You Love Me
BOTH BANDS COMBINED:
Tramp
Scratch My Back
She Felt Too Good
She Caught the Katy
Wah She Go Do
Love So Strong
Gnawin’ on It
Comin’ Home

Bonnie Raitt opened the Minnesota State Fair’s Grandstand series Thursday night with the help of an old friend, 67-year-old blues icon Taj Mahal. But it was another, even older, friend whose memory informed every moment of the show.

Raitt’s brother, Steve, died in April of brain cancer at age 61, after spending several decades living in the Twin Cities and working as a sound engineer and producer. Indeed, Raitt recorded her 1971 debut album in Minnesota with the help of her brother. His presence in the Cities gave Raitt numerous reasons to visit, and over the years, she has performed here on a regular basis, including five previous gigs at the Fair itself.

At the top of Thursday’s show, Raitt dedicated the evening to her brother, the first of numerous times she spoke of him from the stage. It wasn’t a wake, but a celebration of his life through music and stories — a celebration with more than a little lingering pain.

As such, Raitt turned in the sort of raw, let-all-the-seams-show performance that few in the crowd of 7,275 will ever forget. She devoted much of her first hour to slow, passionate blues numbers, delivered with hushed reverence and, often, closed eyes. She seemed to draw strength from the newest member of her band, the Twin Cities’ own Ricky Peterson, and spoke lovingly of him and his relationship with her brother.

During “Nick of Time,” she sidled up next to Peterson on the keyboards, and praised him for the “Minnesota magic” he’s spent the summer spreading to fans around the country. Later, she sang “Good Man Good Woman” with him as a duet, showcasing a chemistry that suggested they’d been bandmates for decades, not mere months.

But it was Raitt’s version of John Prine’s “Angel from Montgomery” that gave the evening its strongest charge. She opened it singing nearly a cappella, with just a few spare strums on her acoustic guitar, and closed it with her band backing her at full force.

Raitt, who turns 60 in November, also proved endlessly generous, giving shout-outs to numerous friends in the crowd, her fellow musicians and even upcoming Fair performers like Kelly Clarkson and Jackson Browne.

Mahal, who co-produced her 1973 album “Takin’ My Time,” opened the evening with a brisk 45-minute set and later joined Raitt for several acoustic numbers. After she ran through a few of her biggest hits — “Something to Talk About,” “Love Sneakin’ Up on You” and a wrenching “I Can’t Make You Love Me” — Raitt invited Mahal and his entire band for an extended encore that included “Wah She Go Do,” one of the many songs they recorded together nearly four decades ago.

Pop Music Critic Ross Raihala can be reached at rraihala@pioneerpress.com or 651-228-5553.