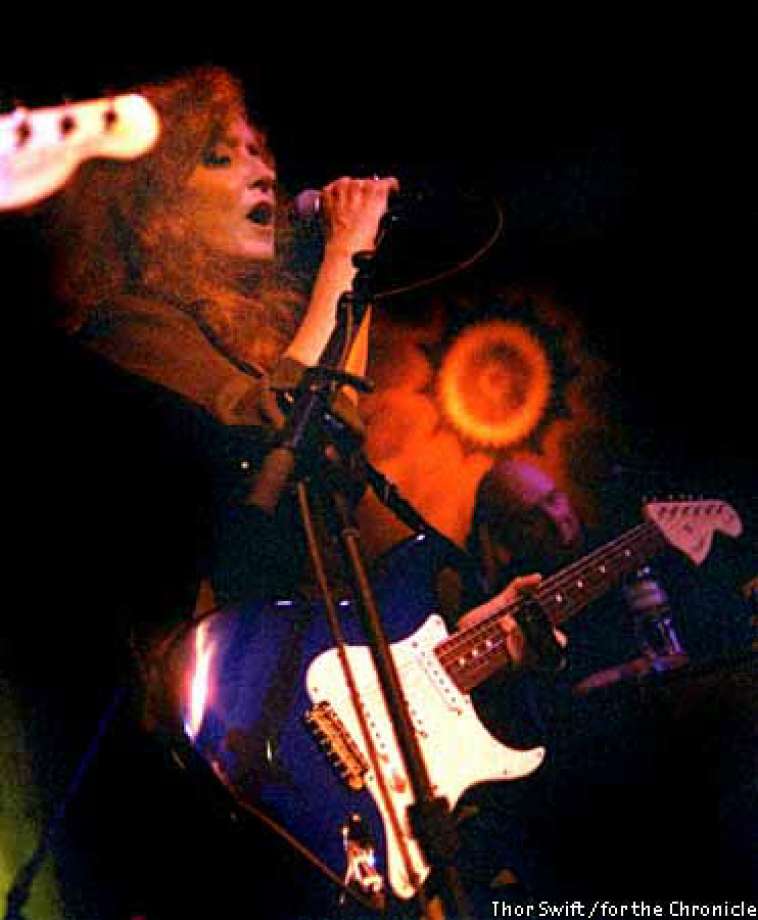 Bonnie Raitt cut loose with a set of R&B and blues songs at Mill Valley’s Sweetwater after a gig by her former band, Padlock. Photo by Thor Swift for the Chronicle

Nobody was particularly surprised when Bonnie Raitt stepped up to the stage Saturday at Sweetwater in Mill Valley.

For one thing, Padlock, her former backup band, was playing two gigs that weekend practically in her backyard. For another, she had been sitting in the front row all night, watching the band play.

It was well past midnight, but the red-headed blues belter stayed onstage an hour, enjoying a heavy-duty jam session with some old friends and musicians. “It feels good to be back in the saddle again,” said an exuberant Raitt, “especially this one, ’cause it’s all greasy and worn.”

Padlock’s musicians are all gunfighters with a lot of notches on their belts. In the 12 years since Raitt and the band parted ways, she has become a multiplatinum rock star, while the band members have continued to add credits to their resumes.

Although Raitt tossed off a quick couple of numbers from her hit albums (“Love Letter,” “Three Time Loser”), she spent most of her time onstage — singing the old R&B songs that she loves. She sang a duet with keyboardist Marty Grebb, an extraordinary musician who doubled on saxophone, and she knocked off a satisfactorily funky version of the old Rufus hit “Tell Me Something Good.” She did an old Fabulous Thunderbirds tune and a slow soul scorcher, “Your Good Thing,” a fairly obscure Stax/Volt number originally recorded by Little Willie John‘s sister, Mabel John. Raitt sang a rocking old Jimmy McCracklin tune with Schell, “Think,” that she used to sing with blues great Charles Brown when he toured as her opening act. She dedicated the song to Brown, who died earlier this year.

Freed from the responsibility of entertaining her fans — after all, it wasn’t her gig — Raitt could just have fun. Accustomed to playing 15,000- to 20,000-seat amphitheaters, she could even see the back row of the 80-seat Sweetwater.

Huey Lewis, who joined the band for a fine piece of Chicago blues, “Checking on My Baby,” singing and playing harmonica, returned with the piano man from his band, Sean Hopper, to join Raitt on “Think,” Lewis bending a couple of pretty wild notes on his harp.

The Sweetwater is the corner bar of the Marin County rock scene. These people have all hung and 21 swung in the narrow, wood pan eled-room before. Carlos Santana has brought his entire band into the place. Jerry Garcia and Elvis Costello played together there one memorable night. Sammy Hagar used to stop by for drinks — and the occasional impromptu jam — on his way home. News keyboardist Hopper even married the club’s barmaid. Raitt, who has kept a woodsy little Mill Valley hideaway for years, knows the joint well.

Padlock fit the bill perfectly. Keyboardist Grebb traded vocals with guitarist Schell and Ivan Neville, who switched off between organ and piano with Grebb. Neville, who started making solo albums as a teen prodigy and belonged to the solo band led by Keith Richards, has grown into a seasoned professional who sang the New Orleans oldie “Mojo Hannah” with the same authority as his father. The band worked over a variety of R&B and blues standards, pumping their considerable skills into a big, rolling sound. The Padlock guys are the type of immensely talented craftsmen whom musicians like Huey Lewis and Bonnie Raitt love. They may not be famous, but they sure can play.

This is life in Mill Valley, where world-famous rock stars frolic with heavy-hitter sidemen in a neighborhood dive that serves as their playroom. They were doing it strictly for the fun. And there is nothing more contagious than fun.