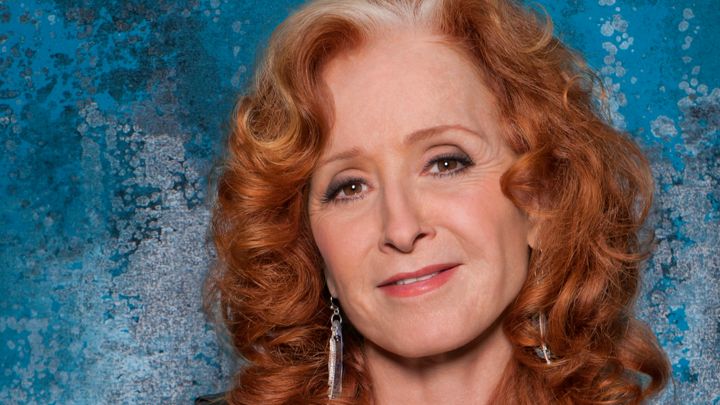 It’s not often a single stanza can sum up a whole political system. But those words from Bonnie Raitt ring truer every day as this pathetic “selection” season lurches ever deeper into astounding ugliness.

As evidenced by her new album, Dig in Deep, and her current concert tour, the opposite is true of Ms. Raitt, whose astonishing talent and endless heart just keep growing.

By way of disclosure, I’ve had the privilege of working with Bonnie on nuclear and other issues since 1978.

At the end of July I had the good fortune to see her perform at the Greek Theater in Los Angeles. She is on a long tour now, and if you get the chance to catch one of her shows, don’t pass it up.

Having watched her perform for nigh on 40 years, through 10 Grammys, 20 albums and countless concerts, I continue to be amazed by the level of professionalism, heart and freshness she brings to the halls. There is never a dull moment in her shows, never a lag or a lapse. She is humble, conscientious and committed to her audiences. She laughs, she banters, she is on top of things.

You say it’s workin’, it’s tricklin’ down
Yeah, there’s a trick, cause the jobs ain’t around

That’s from her most recent album, which is a treasure. It’s distinguished most notably by the number of songs she’s written herself. 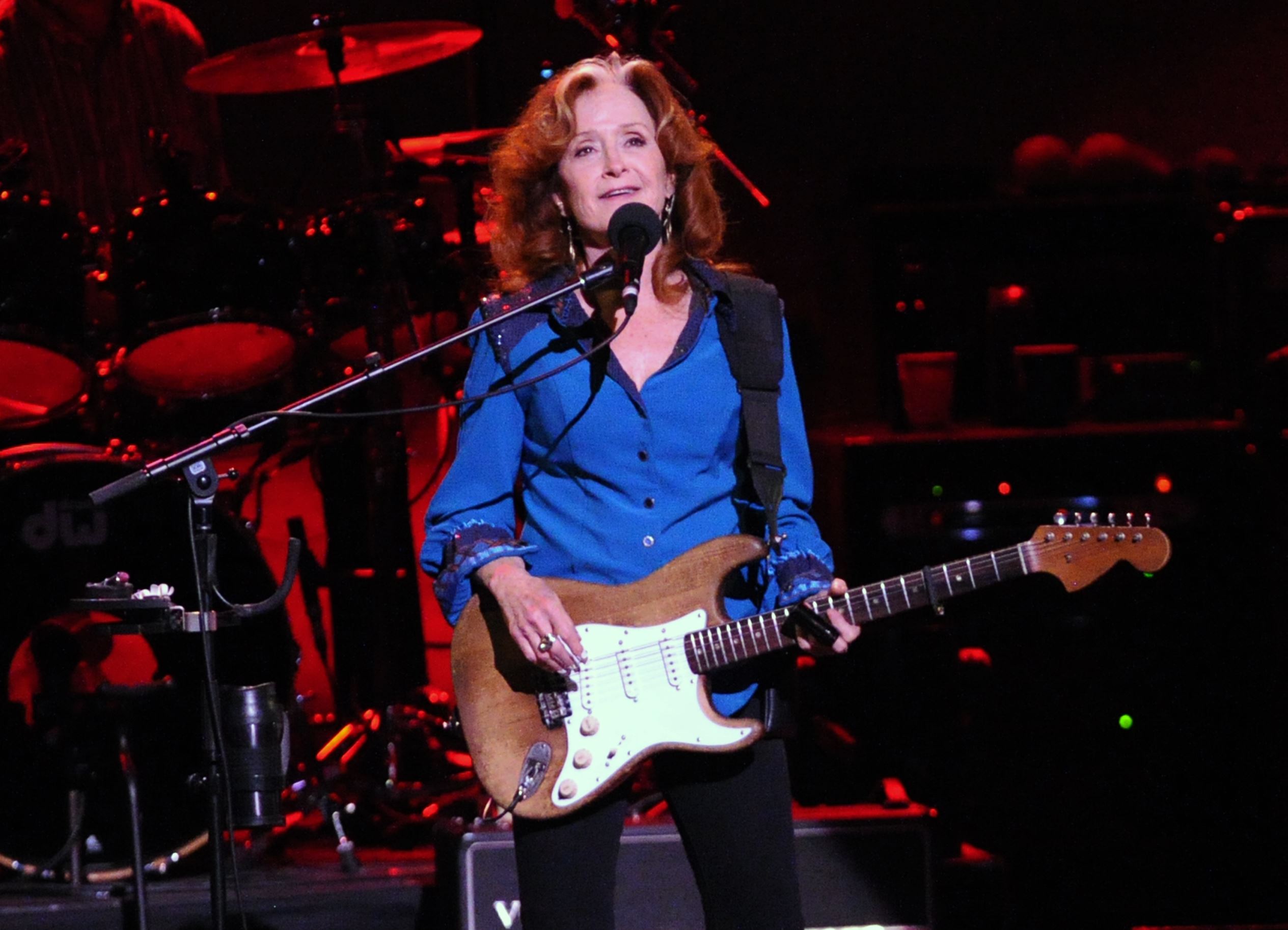 Before the show Bonnie sat down with WYEP’s Rosemary Welsch to talk about her career, influences, and her new album “Dig in Deep.”

“A lot of people have been dropping,” Bonnie Raitt said Wednesday night. “Grateful to still be here — glad you are, too.”

The singer-guitarist and Rock and Roll Hall of Famer is not only still here, she seems to be thriving at 66. In a royal blue shirt and tight jeans, the signature shock of white in her red hair, she took the Heinz Hall stage and grabbed a Strat with as much swagger as she ever had.

The Burbank, Calif., native is in the midst of a career resurgence, having come off of a seven-year recording hiatus with two acclaimed albums since 2012, the latest being the just-released “Dig in Deep.” She jumped right into that one, opening with her reinvention of the INXS dance hit “Need You Tonight” into a Stonesy blues-rocker complete with the first of many steamy bottleneck guitar solos.

Having done this now for more than 40 years, sharing stages with Howlin’ Wolf, John Lee Hooker and B.B. King, Ms. Raitt is like royalty on stage. After the first song, she said to someone in the first row, “Sorry. I just flung that pick at you” — and he dug around to give it back! “That’s all right,” she said, coolly. “I have more.”

She dug in deep with six songs from the new album, including the Los Lobos classic “Shakin’ Shakin’ Shakes,” the “four-on-the-floor” political stomper “The Comin’ Round is Going Through” she wrote with guitarist George Marinelli and the tearful Bonnie Bishop ballad “Undone.” “That’s my whole gig,” she said after that one. “Tearing myself up and recovering.”

Sitting down with an acoustic for her cover of the bluesy “Round and Round,” she told us she “fell hard in love” with John Hammond when she heard him in the ’60s and wanted to marry him as “John Lennon was clearly out of the picture.” She even reapplied her lipstick “in case [Hammond] shows up.”

Of course, Raitt has some good, longtime musicians around her in Marinelli, with whom she squared off numerous times, bassist James “Hutch” Hutchinson, drummer Ricky Fataar and keyboardist Mike Finnigan, who got the honor of paying tribute to B.B. King with a gritty vocal and Hammond B3 solo on “Don’t Answer the Door.”

“Yeah, baby, get worked up. We deserve it,” she said to the crowd after one of the jams.

Part of what made Raitt’s career was putting a smooth gloss on the blues in the late ‘80s with the Grammy-winning “Nick of Time” and “Luck of the Draw” (which she attributed to the nice tour buses in the back), so this is more of a smooth, polished band than a sizzling one — although that might be different around midnight in a corner bar.

She sent her lovely cover of John Prine’s “Angel from Montgomery” out to the victims of the Belgium terror attack and wooed the crowd with other favorites like “Something to Talk About,” “I Can’t Make You Love Me” and “Love Letter.”

At one point, she said the constant parade of guitars on stage was due to the different tunings she uses. “As I get older, my voice gets lower,” she said, adding “gravity is a bitch.”

For the most part, it’s treating her well.

Opener California Honeydrops was a sweet little Mardi Gras-style blues-swing band from the sidewalks of Oakland, Calif., led by Lech Wierzynski, from Poland, who sang, played guitar, trumpet and tambourine, all the while looking like David Lee Roth in disguise. They covered Wilson Pickett and Ray Charles and tossed in a few originals that swept us back to happy, funky times.

Used to Rule the World

Round and Round (J.B. Lenoir cover)

I Feel the Same

The Comin’ Round is Going Through

Love Sneakin’ Up on You

What You’re Doin’ to Me

I Can’t Make You Love Me

Your Sweet and Shiny Eyes 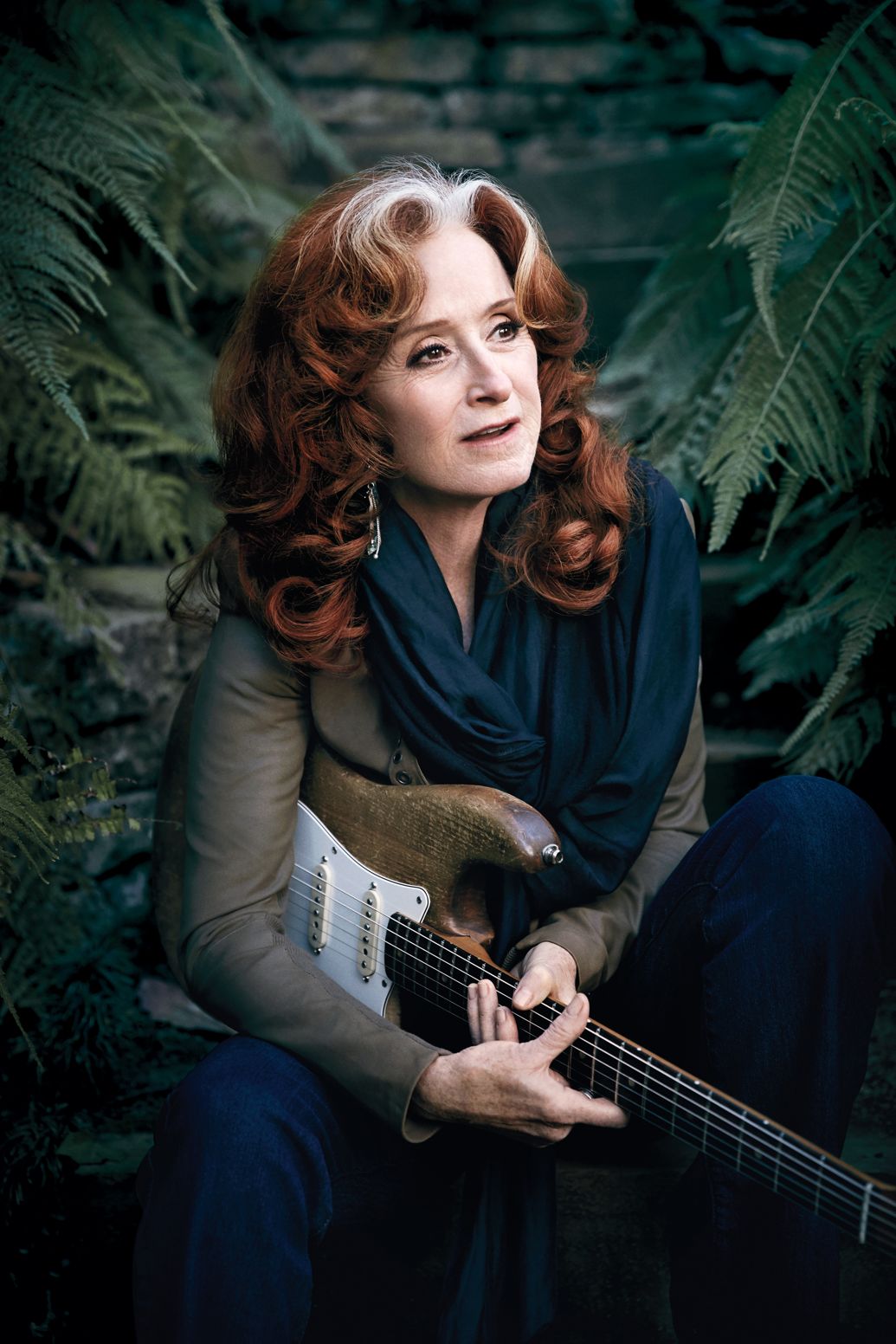 “I love that double-time shit!” says Bonnie Raitt, grinning behind a piano. The singer-guitarist has just led her longtime band through a furious impromptu take on Ray Charles’ “Mess Around.” Raitt, 66, has a reputation as a tenacious perfectionist, but today at her rehearsal studio in North Hollywood, she’s loose and mischievous. At one point, she sets aside a sheet of lyrics for a new ballad to prove she doesn’t need them – but then breaks up laughing when she can’t remember the first line. “So much for losing the training wheels!” she says.

After practice, Raitt heads down a hallway deeper into the studio; there’s a chore she’s been meaning to get around to. Her guitar tech opens a big, musty locker packed with old instruments. “This is over 30 years of people laying guitars on us,” she says. She opens a case to reveal an acoustic Jackson Browne gave her, and another containing a guitar that belonged to songwriter Stephen Bruton, a close friend who died in 2009. “I’d been meaning to go through these for years and figure out whether to give them to charity, or what,” she says. “But then I moved away and my family got sick.”
Raitt is referring to a painful time that began with the deaths of her parents (she lost her mother in 2004, her father a year later); in 2009, her brother died after an eight-year battle with brain cancer.

“I was really depleted,” she says. “You go back and relive your relationships with those people, and when there’s multiple losses and illnesses, it can be almost overwhelming.”

After her brother’s death, Raitt, who tours year-round and plans her career in five-year stretches, told her band she was taking a year off. She started seeing a grief counselor and, for the first time since she hit the road in 1970, watched all four seasons change in her Marin County backyard.
“I needed to take some time to sit down and fall apart,” she says. That reflective period – and the joy she found when she returned to the road in 2011 – shaped Raitt’s new album, Dig in Deep, her first LP with newly written songs in more than a decade. “I have always felt so sorry that I couldn’t be a better this or that for my family members,” she says. “And I know they were probably just as sorry I couldn’t be what they would’ve liked me to be.”

Raitt has lived in Northern California since 1991, but she feels at home in L.A. She grew up on Mulholland Drive, not far from her rehearsal space, the daughter of actor John Raitt, who had lead roles in Carousel and Oklahoma! during the golden age of Broadway in the 1940s and 1950s. She fondly recalls hour-and-a-half school bus rides through the San Fernando Valley and attending Quaker meetings with her parents, whose love of music and social justice helped draw her to the blues: “It became an anomaly when I was 18 or 19 – people would say, ‘Isn’t this odd that a little redheaded daughter of a Broadway singer from Los Angeles is playing Robert Johnson songs?'”