The phrase “world music” was first coined as a marketing term about 30 years ago. Initially it was just a way to organize music from around the globe so people could find it and buy it. Since then, a lot of people have developed a dislike for the term; critics say it ghettoizes foreign music, dividing musical genres into a small “us” and a very broad “them.”

But whatever you call it, the diversity of world music deserves a deep listen. Here at The World, we’ve been acknowledging the richness of three decades of the genre by talking to artists about what “world music” means to them — artists who feel a personal connection to it, like Bonnie Raitt.

Raitt’s foray into “world music” began with the blues, a style close to her heart and central to her career. As a young person, she was fascinated by its evocative and emotional nature.

“It’s real. It’s coming from a place of incredible pain and survival, and hope and perserverence and longing, and anger,” she says. “All of the emotions, it makes it the kind of music that will stand the test of time forever, because it just speaks to the heart.”

For more than 45 years, Raitt has tapped into that feeling and has made her own mark on the genre, with 20 albums and 11 Grammys to her name.

She recognized some time ago that the roots of the blues go way beyond the American South, reaching across the Atlantic to West Africa. She says a visit to Mali back in 2000 connected her with them, and changed her musical outlook.

After her trip, Raitt’s collaborations became more global. They were crowned by her duets with the late Malian artist Ali Farka Toure, who also became a friend. Before he died in 2006, he and Raitt found numerous occasions to play together.

“He was just the guy. He was the cat,” she says of Toure. “And he was so loquacious and generous and very enthusiastic about collaborating. I was just knocked out by his playing.”

Raitt had plenty more to share with us about her connection with world music, including stories from her travels in West Africa. Click the player above to hear it all. 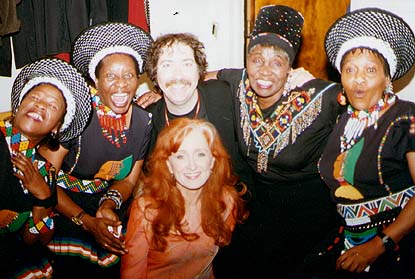 It was a night for the history books at the Bottom Line on April 29, when Afropop Worldwide presented Let Freedom Sing, two sets of music starring The Mahotella Queens, Dorothy Masuka, Thomas Mapfumo, and special guest Bonnie Raitt. The event was part awards ceremony, part fundraiser, part observance of South Africa Freedom Day–the anniversary of that country’s first true election–and all spectacular music. Mapfumo, Masuka, and the Queens were all inducted into the Afropop Hall of Fame. Funds were raised for Afropop Worldwide, Voice of the People (Zimbabwe’s only private radio station), and the families of Zimbabwean musicians who have died of AIDS in recent years. There were serious words spoken about the long path to achieve freedom from apartheid in South Africa, and the ongoing struggle to achieve freedom from newer forms of tyranny in neighboring Zimbabwe. But what most will remember is surely the music that came from one of the most dazzling lineups of southern African musical royalty ever assembled on a New York stage, and from one wild, American redhead with an African soul.

Bonnie Raitt has been a Friend of Afropop since well before she joined the Afropop crew on travels in Mali and Cuba in 2000. By good luck, South African Freedom day (April 27) came just as Raitt was planning to be in the New York area promoting her terrific new album Silver Lining (Capitol). The album has a Zimbabwe connection via its cover of Oliver Mtukudzi’s “Hear Me Lord,” as well as a Mali connection via Raitt’s collaboration with Habib Koite. “Hear Me Lord” has been bringing the house down in Raitt’s recent concerts, so the idea of performing the song as part of this event held a special appeal. But Raitt gave far more than that, co-hosting both shows, and bringing along her band along for a short, cracking set at the end of each. 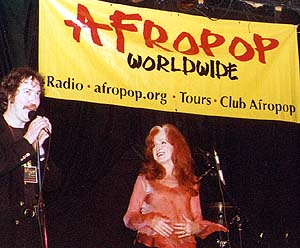 Afropop Worldwide host Georges Collinet, originally scheduled to be Raitt’s onstage foil, was called away to an emergency assignment in Chad, so Executive Producer Sean Barlow stepped up to the plate. Raitt found time to reminisce humorously about tent-life in Timbuktu with Barlow and the Afropop crew. But she also returned often to the themes of the night: celebrating music, and reaching out to people suffering in southern Africa. “Our hearts go out to those in Zimbabwe who are struggling with so much,” said Raitt. “We must let freedom sing, not just tonight, but every day.”

The other business of the night was the inducting of artists into the Afropop Hall of Fame, which honors artists, individuals and organizations who have made extraordinary, contributions to advancing understanding and appreciation of contemporary African music. Prior to Let Freedom Sing, the list was: The Corporation for Public Broadcasting Radio Fund, and its officers Rick Madden and Jeff Ramirez; Bonnie Raitt; Joshua Mailman; The Nathan Cummings Foundation; and the Democratic Republic of Mali. Let Freedom Sing provided Afropop Worldwide with a welcome opportunity to induct the first African musicians to the HOF–because after all, music is what it’s all about! 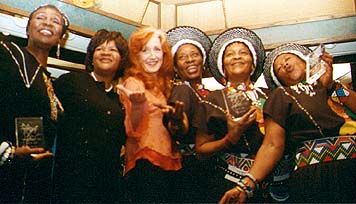 The Mahotella Queens bustled onto the stage before a nearly full house of patrons sipping donated South African KWV wine and Imoya brandy, and eating food provided by Madiba, New York’s only South African restaurant. The Queens still call their backing band Makgona Tshole, the Jack of All Trades Band, but the members are no longer the gentlemen who first went by that name in 1964, but rather kids who weren’t even born then “This month, I turned 60 years old,” said Mahotella Queen Hilda Tloubatla, in a boast that went down very well with Raitt. Raitt has been telling interviewers all spring that so far her 50s are her best decade yet. Just the same, when Hilda found a moment to propose that Raitt sing a song with the Queens on their next album, the American singer replied that she would need to take heart medication for the session.

Heart is certainly in long supply in the Queens’ act. They still spring and cavort like school girls in joyously synchronized moves. Better still, their voices still come together in one of the richest, fullest, most disarmingly beautiful vocal sounds in pop music anywhere. After a selection of old and new songs, including their gorgeous acapella number “Town Hall,” the Queens invited a surprise guest to the stage.

Dorothy Masuka recorded her first hit–at age 16–in 1951, when the Queens actually were school girls, and Raitt was just a baby. After a storybook life of young musical glory, protest and confrontation with the South African authorities, decades of exile, and a triumphant return to Johannesburg in 1992, Masuka cuts a truly regal presence. To her, the Mahotella Queens are “the girls,” but when she came on stage to join them for two songs, she definitely held her own, both in the cavorting and singing departments.

On Masuka’s song thanking Nelson Mandela, “Madiba,” her rich, jazzy lead was buoyed gloriously by the Queens’ sunny harmonies. Masuka relished the chance to weave among the dancing Mahotella Queens, and the crowd roared, sensing that they were witnessing a first. Masuka’s second song dealt openly with the spread of HIV-AIDS, adding a poignant accent to an otherwise exuberant performance.