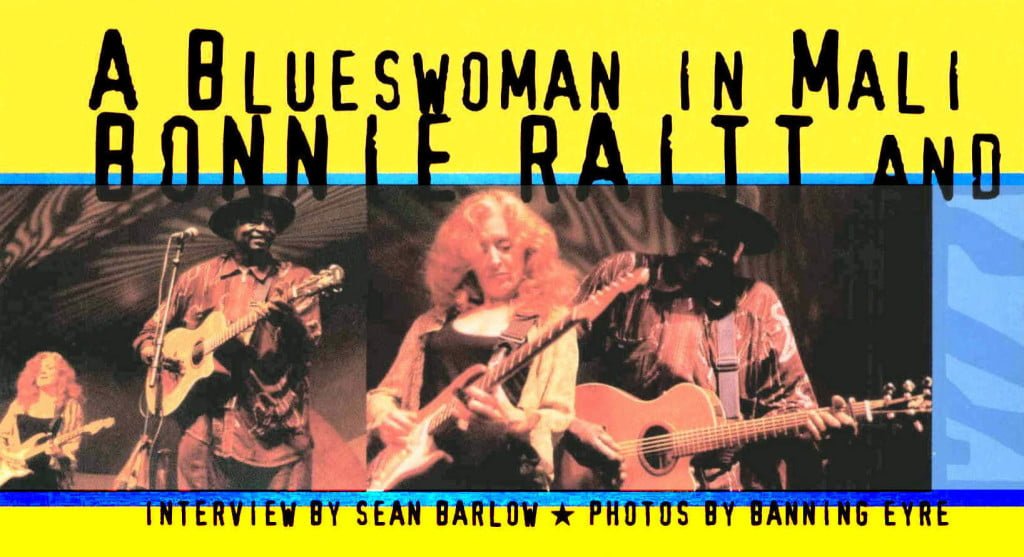 Rereading this piece in 2015 from 14 years ago, roughly the half-life of Afropop, is nostalgic in so many ways. First, there is the memory of Mali in those wonderful, hopeful days. The tragedies of recent years in this—among the most beloved of all the African destinations I’ve known—would have been unimaginable in 2000, when we ventured to Bamako and beyond with Bonnie Raitt. Our journeys and jams with musicians during three magical weeks in Mali was huge for all of us. Bonnie herself never fails to recall the experience when we cross paths. The musicians too are permanently marked by the encounter. And for Sean and me, it was absolutely one of the most glorious passages in the 27-year run of Afropop.

This interview also underscores what an insightful and thoughtful fan and observer of African music and culture Bonnie was and is. What we get in these exchanges is a mix of passion, humor, curiosity and deep intuitive understanding. We can only hope that some of that spirit will manifest in Mali’s future, and the world’s. God knows we need it!

Afropop dives into a celebration of the blues–for some, the essence of the American experience and for others a link back into a lost history in Africa. For our program, we also went back through a number of key interviews we’ve done in recent years where the subject of blues came up, particularly in reference to the genre’s African roots. This feature presents extended excerpts from the interviews we presented on the program, and a few others. [Produced by Banning Eyre, originally aired September 3rd, 2003]

Bonnie Raitt speaking after her trip to Mali with the Afropop team in January, 2000.

” I don’t speak from an academic point of view. For me, it’s all feel, and ever since I first heard Ali Farka Toure when we played together at the Winnipeg [Folk] Festival 15 years ago, and I was turned on to the first batch of Malian music, I was riveted. I absolutely could not believe that something as close to the Delta music existed in Africa. The kind of blues that most gets me is Robert Pete Williams, Fred McDowell, Skip James, Son House, John Lee Hooker, the really dark, stark music–and here it was, mirrored back to me, in the music of Ali Farka. So then to go to the country where this is from, having done a little education and reading, and find someone [Lobi Traore] purveying a more modern outcropping of that, keeping one foot in the tradition, very evocative, dark and stark and haunting and lonely and sexy and all those things John Lee Hooker’s music brought out of me, to find that also with an almost sunny expression rhythmically on his guitar–it’s not a stark sound, not coming from such a painful place–was amazing.

RELATED
Bonnie Raitt: A Brand-New Model For A Classic Sound

It’s an interesting marriage to have dance music and that haunting sound mixed together. It’s like what you get in Arabic scales, that particular music from north Africa and the Arabic influence that part of the world has filtered in. That’s what made me want to go to Mali.

That type of music, Bambara music, and the way that Lobi plays it, is something that really moves me because its so blues. The thing I like about the blues is the same thing I like about Lobi’s playing. And he has a very interesting hybrid of rock and African and blues in him and he is original in a way that I’ve never heard anybody, his tone and what he plays where and his band is unbelievable.

Music in Mali appears to be more of a living, breathing part of the culture, and in a different place, than in America. There’s a weird cultural anomaly where middle class white kids pay blues musicians to travel around and play for them. Black middle class, upper class, working class people in urban areas don’t flock to blues clubs or buy blues records, so that is a unique sociological institutionalized racism that allows modern black culture to ignore its roots or not particularly like it ,or not honor it because we don’t teach about it in school. There’s nobody saying, “Why would someone want to listen to BB King? It’s their grandparents’ or great-grandparents’ music.” It reminds them of poverty, and an old backwards way before segregation stopped. I understand the sociological reasons why this is basically white people’s music here and in Europe, but it’s a weird strange bizarre thing, and you can’t compare that to a country that owns its own music, and always appreciated its own culture, and celebrates it daily.

It’s a moving river–its not a stagnant minstrel show. Not that blues is, but sometimes it can be a money-making thing to put on television to sell beer, commercials, jeans, or any time there is a truck commercial there’s a slide guitar…”

“Back Around” performed by Bonnie Raitt with Habib Koite