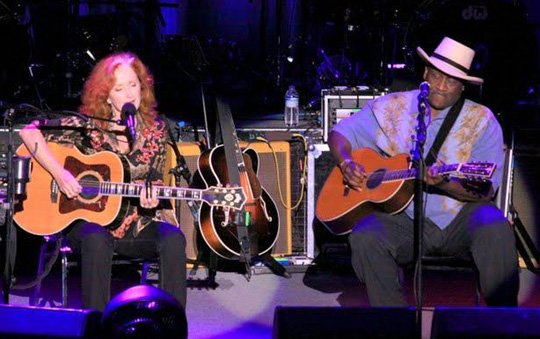 The blues genre was alive and well at the Santa Barbara Bowl on a sultry September Saturday night. A double bill of blues innovators Bonnie Raitt and Taj Mahal nearly filled the house.

A mostly mature crowd was anything but sedate as the audience responded with loud cheers, singing and dancing throughout the show.

He is well-known for blending different genres of music with traditional blues, to create a unique and ever-changing sound. A master chameleon of the blues, his influences include African, Caribbean, Hawaiian and rock music. He was immersed in music at an early age. His father, of the same name, was a well-known West Indian jazz composer, but was killed in an accident when Taj was 11. His mother was a gospel singer.

Even though this city boy, born in Harlem, N.Y., showed a propensity for music as soon as he could walk or talk, he almost gave up the music world to be a farmer, after an opportunity to work on farm in Massachusetts when he was just 16. He continued a farming career through college, where he studied a variety of farm sciences. Luckily for those who love the blues, he rekindled his interest in music about the same time.

In 1964, he moved to California and formed The Rising Sons with fellow legend Ry Cooder. This may well have been one of the first commercial interracial bands to perform in public.

Taj released his first solo album in 1968. Since then, he has collaborated with a sea of superstars in the music world, including The Rolling Stones, Buddy Guy, Howlin’ Wolf, Muddy Waters, Eric Clapton and Etta James. He also wrote film scores and won two Grammys, but even so has found time to “disappear” from the commercial music world to live life and invent new sounds.

When I photographed him appearing at the massive Peace Sunday concert at the Rose Bowl in 1982, he was spending the decade in relative obscurity on the island of Kauai, where he fished and formed the Hula Blues Band. His special appearance in front of 100,000 music fans, along with most of the top American rock stars of the day, including Bob Dylan, Tom Petty, Stevie Wonder and Bruce Springsteen, was in keeping with his support of political activism for worthy causes. In addition to this anti-nuclear rally, he supported many other causes, such as Farm Aid.

At the Santa Barbara Bowl on Saturday night, Taj displayed his masterful command of an immense catalog of music and displayed his unique thumb-and-middle-finger picking style. He had excited fans dancing in the aisles.

But the show had just begun, and the best was yet to come. Raitt, no stranger to the venue, took to the stage amid thunderous applause. Another innovator of the blues, Raitt has been recording music for nearly 40 years, releasing her first self-titled album in 1971. Also coming from a musical family, her father, John, was a Broadway star and her mother a pianist.

Like Taj, Raitt faced an early struggle in her musical career trying to break the status quo of musical genres. As a young red-headed Quaker girl, it was tough in the beginning to get people to take her seriously as a blues performer. With persistence and patience, she melded different musical genres to create her unique brand of blues music, finally meeting great commercial success, including nine Grammy awards and being inducted into the Rock and Roll Hall of Fame. She also shares Taj’s passion for political activism and has contributed her talents to many social causes.

After quickly winning over the crowd at the Bowl with her powerful, funky, jammin’ blues band, she sat down for a short acoustic set with Taj. It was almost the highlight of the evening. The two of them picked through a trio of blues classics and harmonized in passionate blues vocals that could make the hair stand up on the back of any fan of this musical genre.

Next, Taj stepped off, and Raitt’s brilliant band returned to the stage. Playing in her trademark bottle-neck guitar style, she led the group into a medley of her biggest hit songs, and the crowd went wild. Fans danced and sang along to each familiar tune. Just when the crowd thought it couldn’t get any better, Taj and his savvy band of musicians returned to the stage for a super jam with Raitt and her players. Rolling through a jamming encore medley of songs, the explosive sound sent most everyone in the crowd into a clapping and dancing frenzy. 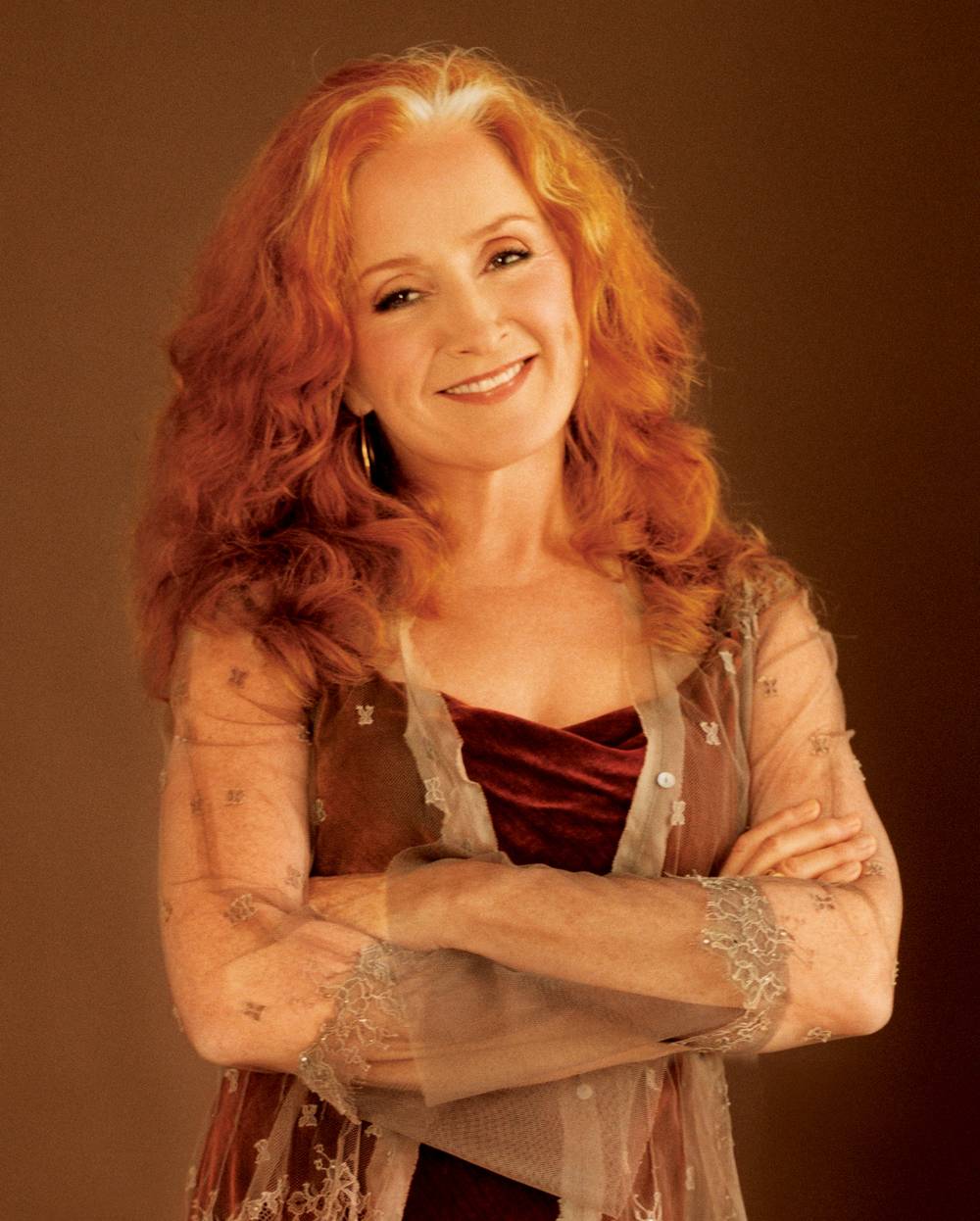 Bonnie Raitt won seven Grammys in the early ’90s, her “Nick of Time” and “Luck of the Draw” topping the charts.

But the singer-guitarist had been playing her enticing mixture of blues and rock for 20 years before all that attention, and she’s been at it for nearly another two decades as things have quieted a bit.

The Rock and Roll Hall of Famer, 59, who performs with blues-roots player Taj Mahal in Phoenix on Thursday, called to talk about her lifelong love of music and how she’s kept it fresh:

Question: Do you still feel you are learning and evolving musically after four decades?

Answer: Absolutely. I’m an avid fan first . . . . Because I don’t write all my own material, I’ve always had my ear open . . . listening to hundreds, if not thousands, of albums and songwriters, reading reviews, sniffing around the Internet.
(Before) the jewel of finding “I Can’t Make You Love Me” or any of the songs I’ve ended up recording . . . there was months of listening to stuff (that) wasn’t right for me.

It’s daunting, but it’s also a thrill when you turn over a rock and actually find something.

Q: You have a big birthday coming up in November.

A: I remember meeting Muddy (Waters), John Lee (Hooker), (Howlin’) Wolf and Sippie Wallace when I was in my early 20s, and they were the age I’m at now. And now I understand why they were so relaxed, calm and confident, and almost bemused. . . . You don’t care as much what people think.

Q: You’re part of a group of musicians who came up in the ’60s or ’70s rock world and who haven’t missed a beat as the years have passed.

A: It is brand-new territory. I look at the jazz, blues, folk and classical artists (who continue to play for decades). . . . We all have a different point of view to the same songs that we sing at 60 than when we sang them at 20.

Q: What do you respect most about Taj Mahal?

A: When I was in college, I was a big folk, blues and R&B fan, and Taj was one of the first ones who showed where the blues could go. His first two albums are real touchstones for me.

I’ve never felt that I wanted to be a musical museum piece for honoring the blues and playing it exactly as it occurred on the 78s. . . . All the permutations that Taj has taken his music to have been a real inspiration for me.

Q: Do you two share the stage on tour?

A: This is the first time many people have seen us in a while, so we have a good dose of our own shows with our bands. But the fun part for me that makes it fresh, especially because I’ve never toured with Taj, is about 45 minutes when we collaborate. We do a couple of acoustic songs in my set and then we do a big blow-out with both bands onstage for about 35 minutes.

Reach the reporter at larry.rodgers@arizonarepublic.com