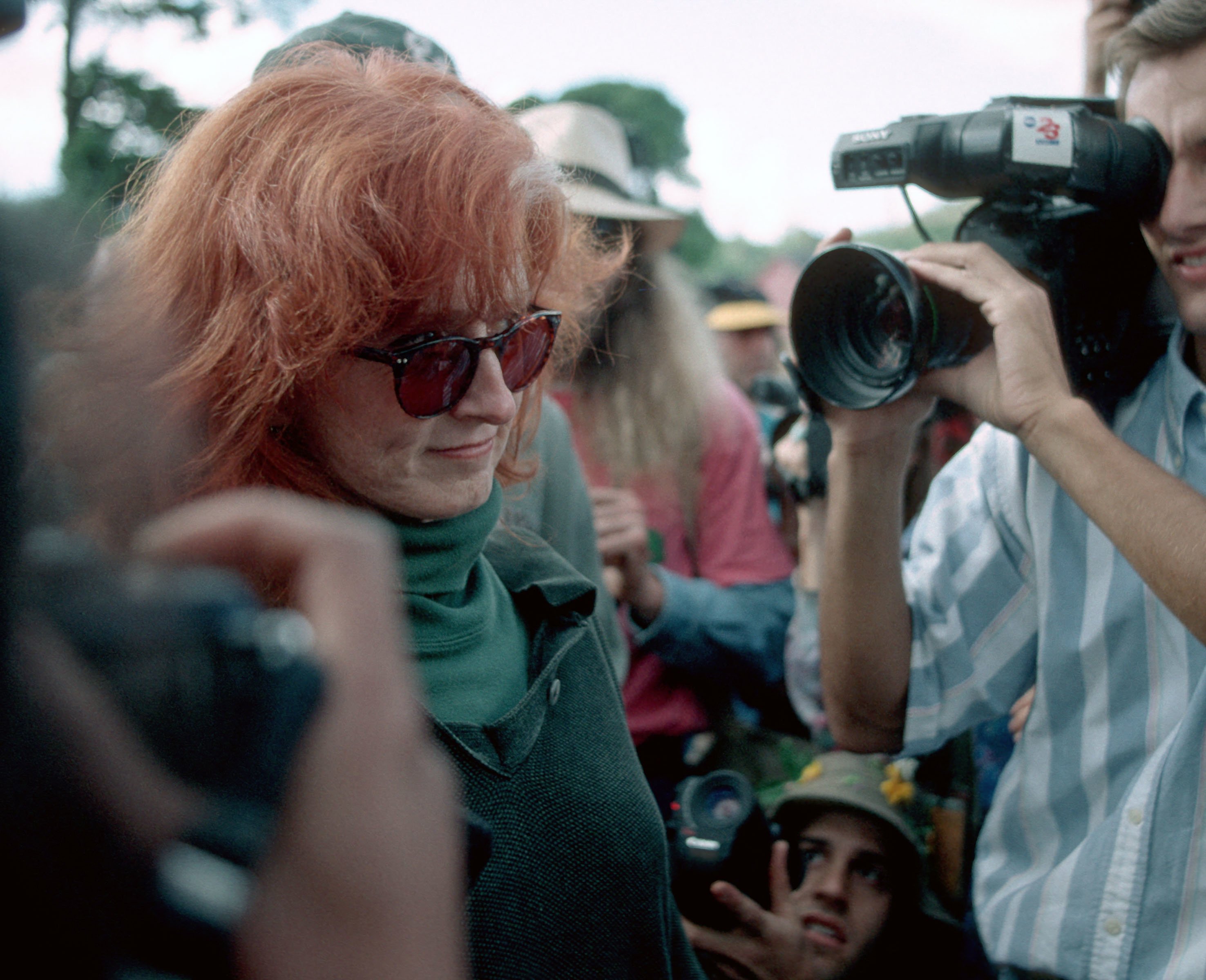 Carlotta, Humboldt County — Several hundred demonstrators were arrested outside this tiny North Coast mill town yesterday when they stepped onto private timberland during a protest demanding permanent protection of the Headwaters forest, the largest stand of privately- owned, old-growth redwoods in the world.

Thousands of demonstrators earlier in the day squeezed onto a narrow strip of the shoulder of Highway 36, outside the gates of a mill owned by Pacific Lumber Co. They attacked the company’s plans to log Headwaters in two weeks and said the Clinton administration’s negotiations to preserve the ancient forest have not gone far enough.

“Thousands of people are joining with us today to say that they have had enough,” said Cecelia Lanman, of the Environmental Protection Information Center in Garberville, who was among those arrested. “Ninety- six percent of the redwoods in California are already gone forever. We’re not going away until we have saved the rest of it.”

The Humboldt County Sheriff’s Department estimated the crowd at about 2,000. But rally organizers put the figure at more than 5,000. Last year’s rally drew 2,500. State and local law enforcement officers dressed in riot gear lined the entrance to Pacific Lumber’s mill, but the demonstration went off without serious incident.

After marching two miles to a Pacific Lumber logging road that leads into the heart of the Headwaters, by early evening about 400 protesters had been arrested for crossing onto the company’s property in an act of civil disobedience and the arrests continued into the night. Among those arrested were singer Bonnie Raitt and former North Coast congressman Dan Hamburg.

“There’s nothing left for us to do but to put our bodies on the line,” said Judy Bari, an organizer for Earth First who was severely injured by a car bomb during anti- logging protests in 1990. “We’ve done everything else we can to save the last remaining slivers of redwoods.”

Joan Baez and Bonnie Raitt Tree-Sit In Protest
On Earth Day 1999, two of the world’s leading recording artists/social activists, Bonnie Raitt and Joan Baez, climbed high into the canopy of what is perhaps the world’s most famous redwood to honor Julia Butterfly Hill. Julia has been keeping a 180′ tree-top vigil on a plywood platform to stop MAXXAM/Pacific Lumber Company from cutting

The demonstration came two days after Houston financier Charles Hurwitz, whose Maxxam Co. owns Pacific Lumber, agreed to put off logging for two weeks while federal and state officials continue talks about a land swap for the 3,000-acre Headwaters Grove. The reprieve averted a potential showdown today, when Pacific Lumber planned to begin removing downed trees from the grove.

The talks are focusing on a “debt-for-nature” swap in which Pacific Lumber relinquishes control of a portion of Headwaters for surplus government property elsewhere. The government also would agree to eliminate some of the $250 million in outstanding claims against him from his role in the 1988 collapse of a Texas thrift.

Pacific Lumber President John Campbell said the company wants “fair and just compensation for the land,” and said the two-week moratorium represented a significant development in the negotiations.

But protesters said the deal does not go far enough and demanded protection for an additional 57,000 acres of forest that includes five smaller virgin redwood groves. Environmentalists say the land is critical for the survival of the marbled murrelet, an endangered seabird, and other species.

Protesters carried signs that read “No Clinton Clearcut Compromise” and “Liberate Headwaters, Jail Hurwitz.” Hamburg and Sierra Club president Adam Werbach were among those who addressed the crowd. Raitt, who was there with her father, John Raitt, and other family members, sang several songs.

Religious leaders, including a rabbi from Garberville and a contingent of Episcopalian ministers from the Bay Area, said Headwaters has spiritual significance and should be spared. “What our brothers across the street want to do is a sacrilege, and it must not happen,” the Rev. Jack Schanhaar, formerly of the Church of the Redeemer in San Rafael, told the crowd.

Tensions were high at times during the protest, as mill workers and loggers drove along Highway 36 carrying signs that read “Log the Headwaters” and “Support your local timberfaller” and calling out to demonstrators to go home. But there were no violent confrontations.

A convoy of logging trucks trailing yellow ribbons wended its way through the North Coast city to a rally by Eureka harbor. One truck, carrying a sign that read “California sawmill cemetery,” pulled a trailer carrying mock tombstones bearing the names of lumber mills that have closed.

“Trees are a God-given renewable resource,” said another sign. “Fifty-eight California sawmills closed since 1989 with over 5,000 jobs lost, eliminating thousands of other related jobs and devastating countless families and communities.”