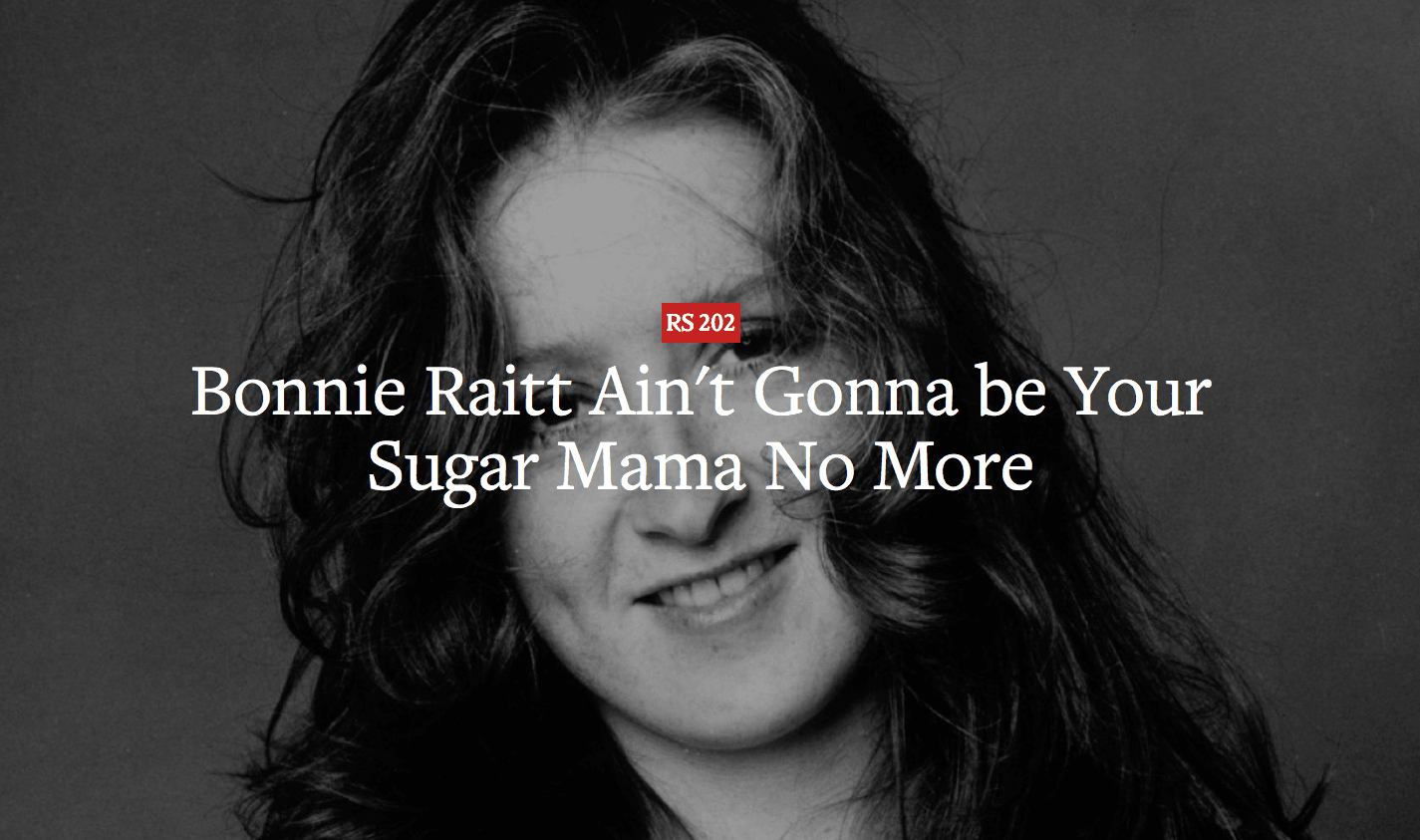 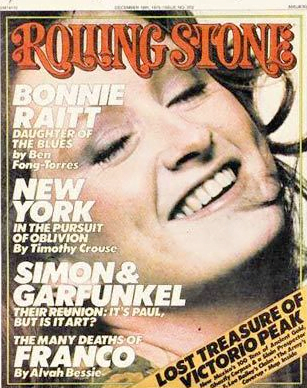 It is Alice Doesn’t Day, October 29th, a day to show the system how much it depends on women. Women are urged by the National Organization for Women to refuse to work, in or out of the house, in or out of bed.

It’s 1:30 on Alice Doesn’t Day, but Bonnie Raitt is hung over and doesn’t know what day it is — she is in downtown Nashville, using Tootsie’s Orchid Lounge as a backdrop for a photo session. As she wanders past a few stores, past a few Nashville cats striding by with their guitars in grip, something, or someone, is bothering her. In a minute she’s back at Tootsie’s. A few steps behind are two urgent-looking young men. She looks annoyed. “This jerk” — she motions to the bearded one behind her — “comes up and starts telling me, ‘I was in jail and I let Jesus Christ come into my life, and he forgave me all my sins.’ He wouldn’t stop. If I was a minister the guy wouldn’t have let up enough to let me tell him.”

The two young men are back, hovering. They do not recognize Bonnie, who will be headlining this evening at the new Grand Ole Opry. They just want her to show up at a revival meeting that night. Bonnie stops posing, nods an irritated head toward the two. “I don’t want these turkeys behind me,” she tells the photographer. The two men hear and seem puzzled, but move off toward a parking meter. Bonnie shoots a glare: “Would you please not watch? I’m already self-conscious as it is.”

She has given them a perfect opening and one of the JC freaks — the one who was forgiven — takes advantage of it: “Jesus,” he soothes, “will free your soul.”

Raitt squints, rolls her eyes. “Jesus Christ,” she mutters, “this town is out to lunch.”

Just past three on Alice Doesn’t Day, she returns to the Spence Manor Motor Hotel just in time to climb aboard the tour bus (called Kahoutek I and featuring chrome mag wheels) to go to the Grand Ole Opry for the sound check. For Nashville, John Prine has been added to the Raitt/Tom Waits bill, and Prine looks like he got good and warmed up the night before. Electric hair, Manchurian moustache, undersized denim outfit, green socks, black tennies. He is tossing a drink around. Tom Waits, as always, is hunched over, outfitted in grimy newsboy cap, slop-dash black suit, soiled white shirt, thin tie and thinner cigarette.

“…and I think I got married to the bartender”…Bonnie is talking…”That’s what happens when you don’t get served your dinner till eleven. I only wanted one screwdriver and I wind up drinking eight of them.” She and Waits and Prine had jammed till 5 a.m. the night before and an entire party had collapsed in her suite. She turns to Tim Bernett, her road manager. “Did you leave that cherry in my bed?” Prine fingers his maraschino and delivers the obvious punch line: “I’ve never left a cherry in bed.”