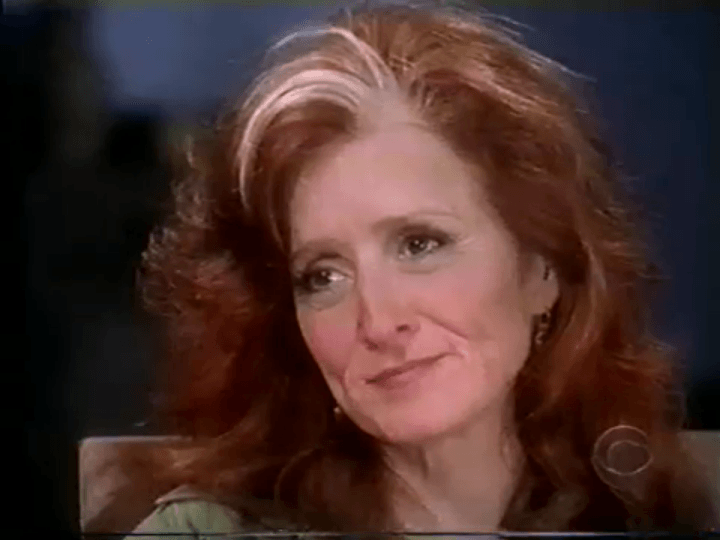 On Wednesday, Feb. 17, Dan Rather profiles Raitt for “60 Minutes II“, taking viewers backstage at a “Tonight Show” taping and at her triumphant homecoming gig at Los Angeles’ Greek Theatre.

“I’ve never worked for anybody before, that makes me pretty cocky,” says the 49-year-old singer and guitarist. So it is, Raitt tells Rather, that her eight-year marriage to actor Michael O’Keefe has been “a humbling experience. I don’t get to be the boss in the marriage,” she says. Raitt ruminates on a past of drinking and drug abuse, a lifestyle she shook off 10 years ago, and on her immense success within the last decade, which includes winning nine Grammy Awards. (The Grammys will be telecast on CBS the night of Feb. 24, live from Los Angeles.)

This wonderful interview covers so much ground in so little time. Bonnie’s warmth and honesty is out front.
Sprinkled in are some performance highlights, as well as early vintage photographs.

“I’d like to be remembered as someone that was always true to what I really felt my musical taste, my politics, my anger, my frustration, my hurt, my joy, my eroticism,” Raitt says. “I want to be remembered for the full spectrum as an honest, earthy, confused woman that lasted a long time.

Bonnie on her 1965 Fender Stratocaster –