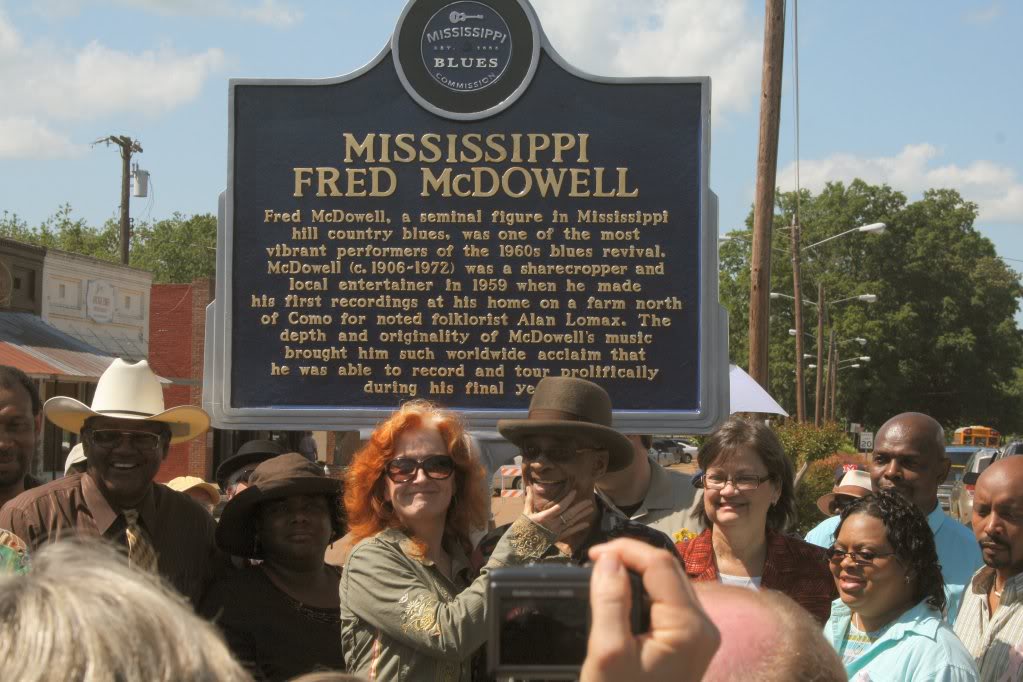 Dick Waterman was McDowell’s manager during the 60s.

It was sweltering hot on Main Street, a two-lane road through town with brick storefronts. Approximately 200 people were fanning their faces as the dedication began with students from a local high school playing and singing one of Mississippi Fred McDowell’s songs.

Grammy award winning singer-songwriter Bonnie Raitt made a special appearance at the dedication for her mentor.

“Well, he was one of the first blues artists that I got to meet, and I fell in love with his music from the first time I heard it on record. To have the honor and privilege to be able to be friends and tour with him in my early career was a gift I think like no other. His style of slide playing and his rhythm playing influenced me tremendously. I don’t know why we hit it off so much, but we just loved each other very much. It was a big loss when he passed when I was only 22, so it means a lot to me to be able to be here today.”
“Well, I’m so happy to hear that they’re doing this blues trail with 150 markers, elevating the music of blues and culture to the rest of the world. It’s been long overdue. Mississippi Fred McDowell is a giant in blues and there are so many other people that deserve that attention,”

Southern Documentary Project ‘Shake ‘Em On Down’ focuses on Fred McDowell’s bottleneck blues with Bonnie Raitt
Shake ‘Em On Down: The Blues According to Fred McDowell A Documentary Film by Joe York & Scott Barretta B.B. King, Muddy Waters, Robert Johnson, Howlin’ Wolf. When it comes to Delta blues, there’s no shortage of well-known names to cite. But there’s another region — and other musicians — to credit for Mississippi’s state-line-road-sign

Eventually, there will be 150 Blues Trail Markers throughout Mississippi and in states connected with the blues from Mississippi. The first three blues trail markers were unveiled in 2006 in Holly Ridge, Greenville and Greenwood. The first Mississippi Blues Trail marker to be placed out of state was done so today at Third and Beale.

Shows Mississippi blues singer, Fred Mc Dowell, singing and talking about his blues. Includes scenes of the area which helped to shape his country blues.
Blues Maker – by Univ Of Mississippi – Published 1969

Bonnie Raitt – A Talent In Transition