For a long time I have been watching feminism developing in the field of music. I am tired of hearing the classic comment “Oh, that music is just for women” made about performers like Dionne Warwick. We have a few cult figures, headed by Joni Mitchell. Her commercial popularity came primarily from the male attentions of Crosby, Stills, Nash and Young, although the cult realized her tremendous song writing ability many years before. We have our folk/political singer: Joan Baez, We have Fanny to convince us that females can compete with Mick Jagger’s sexual actions on stage. But there are many other areas of music that have been previously untouched on a national level by an awakened woman. We now have an amazing woman, an excellent song writer, interpreter, outstanding musician, and most importantly a friend, Bonnie Raitt. 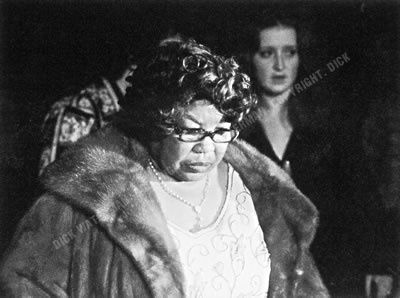 Bonnie Raitt and Sippie Wallace – Boston 1974 – What made Sippie Wallace unique was that she was one of the first blues singers from the 1920s to write her own material. Most of the better known women vocalists from that era has merely sung songs that had been written for them by men, but Sippie Wallace had her own outlook on a woman’s role and she was more than ready to put her thoughts into songs. (You can read the rest of this essay in Dick Waterman’s new book, “Between Midnight and Day: The Last Unpublished Blues Archive.”)                        © Dick Waterman

Anyone who attended last Monday night’s concert at the Orpheum had the chance to observe a woman coordinate artists Sippie Wallace, Roosevelt Sykes, Junior Welles, A.G. Reed, John Payne, Dave Maxwell and others, into an incredible experience. She was in fine form, playing and singing to the top of her seemingly unending ability. As Bonnie says,

“I’m sick of being told that I’m as good as a man on the guitar.”

In fact she’s better than most. Much of her early blues experience came, from the late Mississippi Fred McDowell. Her album Give It Up is dedicated to him. She seems to grow with each musician she has come into contact with since taking that experience and making it her own. Listening to her play is a pleasure. (Most of those “hot licks” on her albums are her own, not male back up.) Her voice, as many notable critics agree, is worthy of attention as well.

Aside from her immense talent, the apparent ease, and obvious enjoyment she found in her performance, I felt, for the first time, that here was a woman could transcend the stereotypes of women in music, and do it with the love and respect of all that comes in contact with her. She controlled a group of egocentric musicians who were each used to carrying an entire program on their names alone. She put them together, something which would normally only happen in a private midnight jam, not for our ears. She didn’t allow one to dominate the other for a moment. She didn’t allow them to dominate her, either. She was the star from the minute she hit the stage.

Bonnie’s love and respect for the two old survivors of the days when blues was not so “in”, Sippie Wallace and Roosevelt Sykes, was impressive. Bonnie’s dream has always been to use her own popularity to give the spotlight to those who have been forgotten. Last Monday was an obvious satisfaction to all; both artists received standing ovations for their arrival on stage as well as for their performance.

Raitt and band tough to beat

RELATED
I Am (Not) a Diva