Some musicians can steal a show. But in the case of Bonnie Raitt’s recent run of appearances surrounding the Grammy Awards, it was less a case of theft than a claim of ownership.

There she was confidently taking over the stage in midst of the Grammys’ tribute to blues master B.B. King — following perhaps the hottest singer in country music, Chris Stapleton, and Gary Clark Jr., one of the most lauded guitarists of the past decade.

She’d done the same thing two nights earlier during the American Music Assn.’s tribute to the Eagles’ Glenn Frey. She capped a 2 1/2-hour program that also featured Lee Ann Womack, Brandi Carlile, the Civil Wars’ John Paul White and nearly two dozen others, her steely voice and razor-sharp Fender Stratocaster cutting through the sounds of the assembled masses like a call from the heavens. 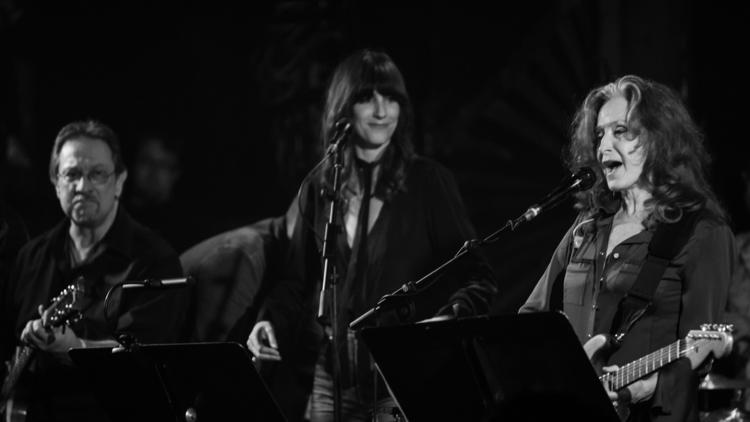 Booking Raitt at this year’s Americana showcase even though she wasn’t a Grammy nominee was a no-brainer for association President Jed Hilly.

“It’s hard to go wrong with Bonnie,” he had told The Times a few days earlier.

“It’s fun to just be like the legacy artist and join in and do my thing and to have a new record coming out,” she said from her perch on an overstuffed couch in a West Hollywood hotel virtually around the corner from the middle school she attended several decades ago, growing up as the daughter of stage and film star John Raitt. She was dressed in a midnight-blue plaid shirt, dark jeans and fashionable black boots.

To some extent, Raitt has been sitting on the sidelines since wrapping up her last tour supporting her 2012 album, “Slipstream,” which earned her the Grammy for Americana album of the year — the 10th Grammy of her career. Four of those came to her at the 1989 Grammy ceremony when she cleaned up with her breakthrough album “Nick of Time,” released 18 years into her recording career.

Her Grammys-related performances have launched a new round of activity for Raitt, including the release on Friday of her latest studio album, “Dig in Deep.”

In addition to highlighting her sultry, sandpapery vocals and down-and-dirty electric guitar work, the new collection also includes a half-dozen songs written in a creative burst more intensive than she’s displayed in many years.

“I had about a decade of family illness and loss coupled with two album cycles, so there wasn’t an emotional space or literally a practical time period to focus on songwriting,” said Raitt, her face framed as always by her flaming red hair, with the familiar streaks of white over her forehead.

That included the deaths of her mother, pianist Marjorie Haydock, in 2004, and the following year her father and stepmother. Her older brother, sound engineer Steven Raitt, died in 2009 after a long battle with brain cancer.

“I took a whole year away from music, at least in terms of thinking about it as, ‘What am I going to do next?’ ” she said. “I just went to music for fun. I went to Hardly Strictly Bluegrass [festival in San Francisco], I listened to a lot of jazz, I saw the symphony a bunch of times, I saw dance. I just stretched out and lived kind of a more regular life.”

RELATED
Bonnie Raitt on Time, Loss and Renewal on ‘Dig in Deep’

In addition, she said, “I went to a lot of grief therapy and let all the sadness come up that had been pushed aside” following her family losses.

Those emotions surface in many of the songs on the tellingly titled “Dig in Deep” album, nowhere more heartfelt than on the two concluding tracks, Joe Henry’s “You’ve Changed My Mind” and her own ‘”The Ones We Couldn’t Be.”

Henry’s song, she said, was written during their collaboration for “Slipstream” and is the one holdover she felt belonged on the new collection.

“He wrote it about someone who is shuttered and closed in,” she said. “It’s such a beautiful expression of being able to come out — somebody coming back out into the sun, back into real life, whether it’s because of divorce or death or illness.

“Some people get closed in, and they never come back out. So I particularly wanted to put that song on this record. For me, it honors the fact that those sessions were so liberating for me.”

The album also includes the pulsing rocker “Unintended Consequence of Love,” a meditation on two people who have grown distant over time, and the muscular rave-up “The Comin’ Round Is Going Through,” another song that Raitt wrote.

“I just knew I was going to write something in that four-on-the-floor kind of Stones thing,” she said. “And it was this perfect vehicle for what I wanted to write about the hijacking of democracy.

“The lack of campaign finance reform and the sheer cost of the elections — it’s just staggering,” she said. “We’re seeing people’s outrage and unrest and what’s fomenting because of the anger at the system being broken. That’s kind of why I wrote the song — it’s an equal-opportunity chance for people to vent those feelings.”

Raitt has been a social activist and arts philanthropist for most of her life, both passions tracing to her upbringing in the Quaker community.

She just played the latest in a string of benefit concerts on Monday on behalf of Cal State Northridge-based noncommercial radio station KCSN-FM (88.5). Appearing with singer-songwriter Maia Sharp, Raitt joined a list of high-profile pop and rock musicians who have supported the station in recent years, including Tom Petty & the Heartbreakers, Jackson Browne, Lucinda Williams and Laura Marling.

“Making an album takes so long,” she told the sold-out house at the Valley Performing Arts Center in Northridge on Monday (her upcoming tour returns to L.A. with a July 30 date at the Greek Theatre). “You write the songs, record them, pick out all the album artwork, but then it’s ready and I get to come out and do this — so it’s all worthwhile.”

For several years, however, she didn’t fret much about writing new songs.

“For me,” she said, “I never care whether they’re mine or someone else’s, as long as they get the job done. I just want to find something great to say musically and lyrically.”

The Lenny Interview: Bonnie Raitt
The prolific singer-songwriter on love, loss, and having the best time of her life. 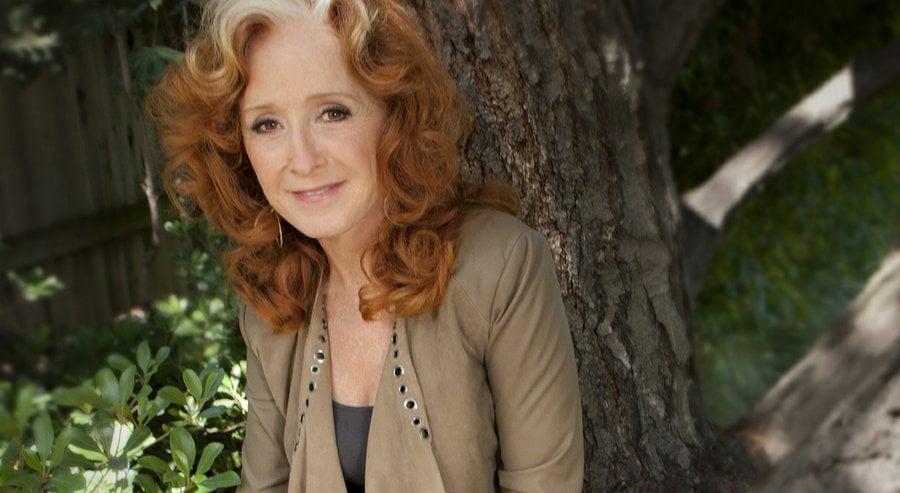