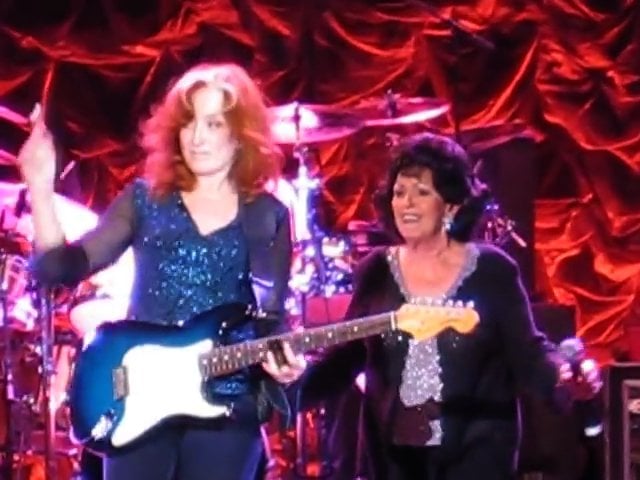 Watermelon Slim, aka Bill Homans, sticks out in a crowd. Wearing his trademark Stetson and an over-sized turquoise pendant, our Oklahoma bluesman is a striking figure. He was among the throng attending Bonnie Raitt’s concert at Riverwind Casino March 5.

“Oh, I played with Bonnie Raitt back in 1972 and ’73,” Slim drawled. “She and I both had similar musical ancestors and we went different directions.” This was a revelation but makes perfect sense as the artists are the same age (59) and started their careers on the east coast. “I haven’t been on any Bonnie Raitt records but we’ve been negotiating for several years to get her on one of mine. It hasn’t happened yet, but it might,” Slim said. That will be mighty lovely if it does.

“Are you ready for a thing called love?” was the musical question posed by Bonnie Raitt to a full room early in her show. Backed by an all-male band on guitar, bass, drums and keys, she played from a discography that stretches back to her first stellar self-titled album in 1971. Raitt also played guitar on most tunes, switching between electric and rhythm.

“We have the Queen of Rock ‘n’ Roll in the house tonight,” Raitt announced. “Wanda Jackson, I can’t believe you’re here.” The diminutive dynamo of “Fujiyama Mama” and “Let’s Have a Party” fame waved to us from her aisle seat. Raitt also introduced her band, all session badasses, including Ricky Peterson (keys) who’s played with David Sanborn, Prince and Stevie Nicks.

Raitt performed duet “Good Man, Good Woman” from her “Luck of the Draw” disc, with Peterson singing the Delbert McClinton line. “We were just in Milwaukee where it was 15 degrees. What is it here, 80? Much better for the vocal cords,” Raitt said. Her voice sounded tremendous, unchanged from Radcliffe days when she was observed by a Newsweek reporter opening for Mississippi Fred McDowell in a New York saloon.

Raitt dedicated “Nick of Time” to brother Steve, her song about how we all eventually run out of the precious grains of sand in the hourglass. Reviewing photos from the show later revealed a woman who appeared to be in religious rapture. Raitt is known for being highly educated, with Quaker heritage and personal history of just political advocacy. Child loves her art. “I have the best job playing with this band,” she said. Raitt’s musical mojo is passion and intelligence. She was the young coed in 1969, dropping out to learn the blues from 65-year old African American genius Dick Waterman.

“This is a blues number I’m sending out to a great bluesman in the audience, Watermelon Slim. Where are you?” Raitt said. Slim stood and doffed his hat. “I want a man to rock me like my backbone was his own,” Raitt sang. “Now listen up Slim/ come up here and hold me/ don’t ask the reason why.” I was blushing for Slim. “Just love me like a man,” red hot Mama Raitt crooned. Next tune was Cajun-inflected and she invited us to join her at the New Orleans Jazz Festival in April where she’s on the bill.

Raitt covered John Prine’s “Angel from Montgomery,” altering the lyrics to “When I was a young girl I had me an Oklahoma cowboy/ weren’t much to look at but a free ramblin’ man.”

She rocked her 1991 radio hit “Something to Talk About.” The band bounced around throughout the show in a range from semi-psychedelic to jazzy. Raitt brought Jackson on stage for back-up vocals on the last couple of tunes, including “I Can’t Make You Love Me” and “Have a Heart.”

“When Bonnie Raitt comes to town, it’s easy to see how we can forget about the Depression,” Jackson said. Raitt sang “I believe I’m in love with you” and Peterson gave his keys a spanking. Then the Queen of Rock ‘n’ Roll went front and center to sing lead on “Let’s Have a Party,” her tune that should have been voted the official rock song of Oklahoma last week, but wasn’t. “I’ve been waiting 40 years to meet this woman,” Raitt hollered. “Thanks to the Chickasaw Nation for bringing us to this great room.”