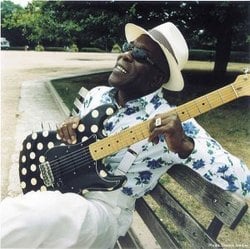 Memphis, TN (Vocus/PRWEB ) April 16, 2010 — Just when you thought it couldn’t get any better, The Blues Foundation confirms that the legendary blues musician Buddy Guy will perform at the 2010 Blues Music Awards on Thursday, May 6th, 2010. 2010 Blues Hall of Fame inductee Bonnie Raitt will present, the night after her own induction into the Blues Hall of Fame, the Lifetime Achievement Award to Guy. The award is a one-of-a-kind creation of Patterson & Barnes, who also created the original artwork that serves as the basis for the 2010 poster. The guitar master will also be feted with oral, video and musical tributes.

Buddy Guy obliterated the perceived chasm between blues and rock, leaving the term “crossover” to awkwardly define the efforts of lesser artists in both camps trying to bridge the racial, generational and stylistic borders of each. And he did it with a sense of dynamics and bravado that are rare in artists of any age, but which have been consistent for him throughout his career. You knew you were experiencing a Buddy Guy lick in the first few lines of any number he did in 1960, and the same can be said today. Buddy has been nominated for 41 Blues Music Awards and has received 28 such Awards.

Along with Buddy Guy, among the more than 25 nominees scheduled to perform are top nominees Tommy Castro, Rick Estrin, Louisiana Red, Duke Robillard, Super Chikan and Joe Louis Walker. And, as always at the Blues Music Awards, there will be surprises.

The Blues Foundation is Memphis-based, but world-renown as the organization dedicated to preserving our blues music history, celebrating recording and performance excellence, supporting blues education and ensuring the future of this uniquely American art form. Founded in 1980, the Foundation has 3500 individual members and 185 affiliated local blues societies representing another 50,000 fans and professionals around the world. Its signature honors and events make it the international center of blues music. Its HART Fund provides the blues community with medical assistance while its Sound Healthcare program offers musicians health insurance access. The Blues Foundation’s Blues in the Schools programs and Generation Blues scholarships expose new generations to blues music. Throughout the year, the Foundation staff serves the worldwide Blues community with answers, contact information and news.