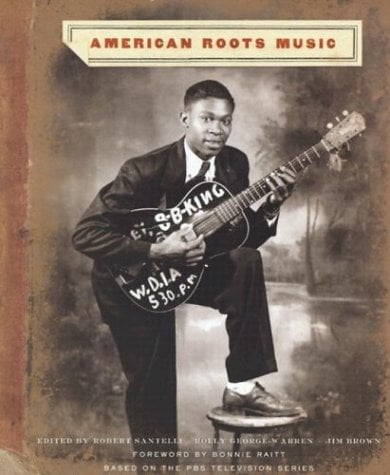 To unite the “uniquely American genres of folk music such as blues, gospel, country, Western swing, Cajun, zydeco, Tejano and Native American” under the designation of roots music and to attempt to explore such a diverse category sufficiently is to invite charges of folly or hubris or both.

But this large volume, the companion text to a four-part PBS series of the same name, boldly does so and largely succeeds. While the 11 essays cover material that has been studied in-depth elsewhere, together they make a convincing case that the tradition of “pre-rock” folk music is worthy of respect and reinvestigation.

Singer Raitt’s claim that “without roots music there would be no… modern popular culture today” might be overstated, but there’s no doubt that the form has been profoundly influential (as well as increasingly popular). Profiles of artists like Hank Williams, B.B. King and Emmylou Harris and careful considerations of the role roots music played in American culture are interspersed with interview excerpts, time lines and song lyrics. Manuel Peña‘s “Musica Tejana: The Music of Mexican Texas” is especially good.

Aside from the excellent essays, the book stands out for its selection of rare and fascinating photographs. A rich and thoughtful investigation of “vernacular” music, this is essential reading for neophytes and connoisseurs alike. (Nov.)Forecast: With the PBS series this fall bound to attract a large audience, this should be a big seller. It should also have a long shelf life as a reference work and a gift book.