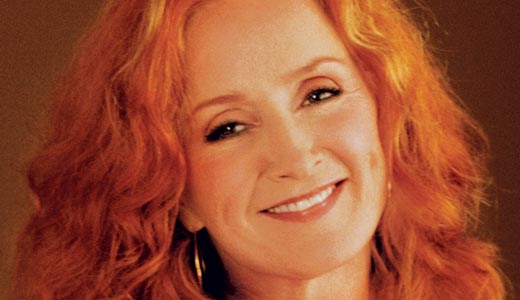 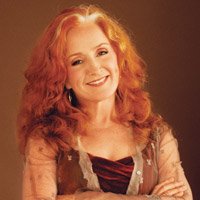 Bonnie Raitt is a California girl by birth, but it’s not a stretch to say the 59-year-old’s artistic birth was here. At 20, Raitt left college to immerse herself in Philadelphia’s music scene, playing her first paid gigs while moonlighting — or in her case, daylighting — as a Quaker typist. (She’ll explain.) The music career stuck, and the nine-time Grammy winner joins Taj Mahal at the Mann on August 8th. Raitt called in to reminisce, name-check a notorious American Idol castoff, and adopt a new blues nickname.

You were born in Southern California, but have said you didn’t fit in there — red-haired with freckles, didn’t tan well, raised as a Quaker. You seemed destined to come to Pennsylvania. Exactly. I thought L.A. was too shallow and just wanted to be a part of the Greenwich Village beatnik scene. I loved folk music, and I always loved African-American music of all kinds.

Why did you leave school at Harvard’s Radcliffe Institute and come to Philadelphia? I met a man named Dick Waterman, who ended up managing Son House, Mississippi John Hurt and a slew of great blues artists. We forged a friendship, and I took a semester off to hang out with these older blues acts with Dick. I explained to my admissions people, “These guys are in their late 70s and aren’t going to be around forever, and I want to study with them.” So Dick moved to Philadelphia, and that’s how I got hooked up with the music scene there.

You also worked part-time here as a transcriptionist for a Quaker group, the American Friends Service Committee. Did you draw any artistic inspiration from that? “I’ve Got The 93-Words-a-Minute Blues”? Actually, it was kind of cool. They made us take typing in junior high, and I played piano, so I had really fast fingers. I was transcribing letters that were going all over the world to AFSC branches, which is like the Peace Corps. My uncle worked for the AFSC, and it was my dream to work with them in Africa. That’s why I majored in African studies, not because I liked the blues.

Is it true your first public performance was here at a club called the Second Fret? That’s right. I opened for Sweet Stavin’ Chain. Though I think the very first was at Pennypack Park — I was really nervous. I’ve still got the little slip of paper that said I got paid $75 to play in the park. [laughs]

You once said that your opening set for John Hammond at the Main Point in Bryn Mawr was like one long orgasm. Any memories we can print? [laughs] I must have been young if I was talking like that. I had a big crush on him, and the way he played just moved me so much. He was so kind and sweet, but man, it was the hairiest gig. To see him skulking in the back of the room with the collar up on his leather coat — I was just shakin’ in my little boots.

Did the veterans give you any kick-ass blues nicknames? Like “Burbank Bonnie” or “Hot Licks”? [laughs] No, they didn’t.

There’s a blues nickname generator on the Internet, so I took the liberty of finding you one. Oh, thank you! What does it say?

It says, “Tonight at the club, you will perform as ‘Bony­ ­Fingers.’” [laughs] I love that!

I’m “Limey Ragtide.” That’s pretty good, too. It sounds like a fungus or something.

Your song “I Can’t Make You Love Me” has become a staple among contestants on American Idol. How do you feel about that? I’m proud they’d pick that song. I didn’t write it, so it was an incredible gift [for me] to be given that song. I know Sanjaya did “Something To Talk About” and then lost. [laughs]

I can’t believe you’re aware that Sanjaya exists. So for those readers who only know Taj Mahal as a casino in Atlantic City, talk about what led you to tour with him. I think it’s a place in India first, then the artist! Taj’s first two albums are among my all-time records in my collection. We’ve been friends since the late ’60s, and to be able to finally tour together after 40 years — I admire him so much, and we have the same love of blues.

And for you, 40 years ago, it all started here. It really was the beginning. It was a golden moment in time. My fans in Philly have stayed loyal, hit records or no hit records. They packed the places long before the Grammys. And now I’m “Bony Fingers”! [laughs] I love it. There aren’t many things bony on me, but my fingers are bony. [laughs]