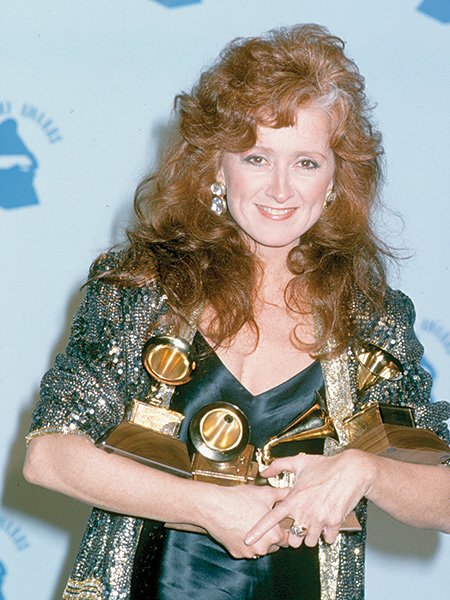 Slicing her guitar through the air at the end of the opening number “Three Time Loser,” Bonnie Raitt stood center stage at the Mann Music Center Saturday and proclaimed “I don’t have to take it anymore.”

This wasn’t merely a statement of frustration, or a jilted lover’s bitter resolution. This was fact: Raitt, who has encountered surprisingly warm commercial reception ever since her 10th album Nick of Time was released in 1989, was celebrating her new, improved working conditions.

Life has changed for this perennial critic’s favorite. Her blues-influenced but not blues-based album won three 1989 Grammys (she won a fourth for an appearance on John Lee Hooker’s The Healer LP), and constant touring has made it double platinum. Her old label, Warner Bros., has acknowledged her extraordinary output by issuing a 20-track collection of (shoulda-been) hits and rarities she personally selected. She has been on the cover of Rolling Stone. After more than 20 years of grinding out sweaty rhythm-and-blues in bars, she’s now a star.

In the build-’em-up-knock-’em-down world of show business, such massive success is typically followed by artistic overindulgence. But Raitt appears emboldened by her recent experience, yet mindful that her direct-to-the-heart music is responsible for this change of fortune. She is playing slide guitar with rewardingly spare strokes, turning short eight-bar solo segments into clear, definitive statements. She is singing with a wise authority and an unerring sense of timing.

Although she still plays the Nick of Time tunes (the ska-kissed “Have a Heart,” John Hiatt’s shuffle “Thing Called Love”) with gusto, she filled her show with the music she understands best – the blues. Mixing swamp guitar, Chicago roadhouse harmonica and a stomping Memphis backbeat, Raitt showed command of the whole of blues tradition, from the naive realism of Mississippi Fred McDowell to the contemporary show style of Robert Cray.

Supported by an excellent six-piece band – keyboardists Walt Richmond and Marty Grebb, bassist Hutch Hutchinson, drummer Tony Braunagel, harp player Pat Hayes, guitarist Johnny Lee Schell – Raitt stirred up a high-energy shout (“Give It Up or Let Me Go”), harmonized with R & B veteran Charles Brown (who offered a criminally short set at the piano before Raitt), created a sassy vocal harmony blend to cover Allen Toussaint’s funk workout “What Is Success,” and sang woefully about her experiences as a traveling musician (“The Road Is My Middle Name”).

The opening act, the Jeff Healey Band, was useful only for contrast: Healey’s frothy guitar spasms made Raitt seem even more profound.

RELATED
Celebrating Songwriters at the Ryman