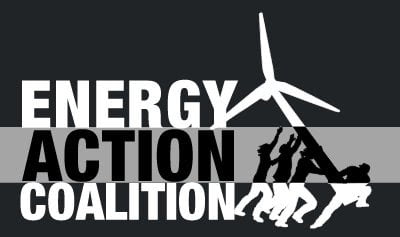 Raitt will perform a benefit concert for the Vote Solar Initiative and the Santa Cruz Energy Action Coalition at the Civic Auditorium on Sunday. She and her crew will pull into Santa Cruz accompanied by a traveling fair of green energy partners.

The entire concert, dubbed “Green Highway,” will be off the energy grid: Lighting will be provided by a 100 percent biodiesel generator running on used vegetable oil, and a biodiesel truck loaded with solar panels will travel with the show to power the sound system.

The Vote Solar initiative was responsible for the $100 million solar bond passed last year in San Francisco. Next week Raitt will join Robert Redford in the dedication ceremony for the first project on the bond — the solarization of the Moscone Center. At 675 kw the installation will be the second-largest rooftop system in the country, second only to the 1100 kw system on the roof of the Santa Rita jail.

“Every time demand for solar doubles the costs go down by about 20 percent, so what we’re trying to do is to encourage a number of local governments to make large investments in solar energy.”

Local nonprofit Santa Cruz Energy Action Coalition is pursuing, among other projects, a solar bond modeled after that in San Francisco.

“We really believe that local control (of power) and renewable energy sources are the way to go, and hopefully our leaders will lead and if not, we’ll do whatever’s required to bring initiative on the ballot to… bring this to the public’s awareness,” said Luke Lehman of Santa Cruz Energy Action Coalition.

Raitt has been active in environmental issues since the 1970s. On her commercial Green Highway tour this summer with Lyle Lovett, she visited 42 cities in a biodiesel bus, flanked by Honda’s electric hybrid cars. She helped create the Green Highway concept to underline the link between business and the environment.

“Our economic life must run in harmony with the sanctity of the natural environment,” said Raitt. 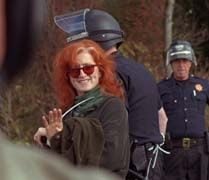 Bonnie Raitt is led away in plastic handcuffs at a demonstration against Pacific Lumber Co.’s proposal to log the Headwaters forest in Humboldt County – 1996 © AP

In keeping with this philosophy several local partners will display their products in the Civic Center courtyard before the concert. This miniature energy fair, which is open to the public, includes demonstration of the biodiesel generator and the Greenpeace solar truck providing power for the concert, and Toyota of Santa Cruz will show off its electric hybrid car. Also on hand will be representatives from local solar installation companies Ecoenergies and Solar Technologies, clean power provider ApolloPower, green architect Marilyn Crenshaw, the Bicycle Hub and Happy Boy and Thomas organic farms and Guayaki/Nub Teas.

“The presence of these companies and their products means they endorse our basic principle of ecological harmony, and our belief in the timeless Quaker philosophy — that you can do good at the same time you are doing well,” said Raitt.

One way local businesses can “do good” is to install a solar electric system. Due to the high rate of energy usage by businesses, solar electric can make a lot of sense for these customers as well as making a large environmental impact.

Solar electric systems of more than 10 kw currently represent the most financially feasible and probably the fastest-growing sector of the solar industry, according to Scott Ragsdale of Cooperative Community Energy.

“There is a lot of roof space on many buildings around town that can be used for this purpose,” said Roger DeNault of Solar Technologies.

Adelman’s record soon will be surpassed:West Marine Products on 17th Avenue in Santa Cruz recently contracted with Solar Technologies to build a 57.6 kw system capable of providing about half of the store’s energy usage. Barry Swenson Builder plans to install a similar system at its Live Oak office.

Frank Fawcett of West Marine said it is possible for businesses to “find a balance of your investment and your impact on the environment.” West Marine may recoup the system cost within seven years.

“They deserve a lot of credit for being one of the first companies in this area to recognize the cost effectiveness of solar energy and its beneficial effect on an environment we all care about,” said DeNault.

Other local business/institutional installations include Artwork Conversion Software Inc. in Westside Santa Cruz, the Plazita Medical Clinic in Watsonville and the Unitarian Universalist Fellowship in Freedom. Many small businesses, such as the coffee shop at 120 Union St. (formerly Jahva House) have made inquiries into a modest solar installation.

The passage of a recent bill, AB 58, authored by longtime environmental supporter Fred Keeley, D-Boulder Creek, made installation of larger systems — like that at West Marine — feasible. The bill provides for the continuation of “net metering,” which allows solar energy producers to sell their sun-made electricity back to the utilities.For the first time, systems of more than 10 kw are eligible for net metering.

Raitt, along with Robert Redford, Graham Nash and David Crosby (of Crosby, Stills, and Nash) lobbied for passage of this bill.

“I’m really grateful to her, I think there are so few celebrities who really use their celebrity status to further important causes. She is a true hero.”

Contact Stephanie Chasteen.
If you go
General-admission seating is sold out but a handful of special Gold and Silver circle tickets, including a post- concert reception with Bonnie Raitt, are available by calling (408) 799-7998.

The green energy fair is free and open to the public, starting at 3 p.m. outside the Civic Auditorium.