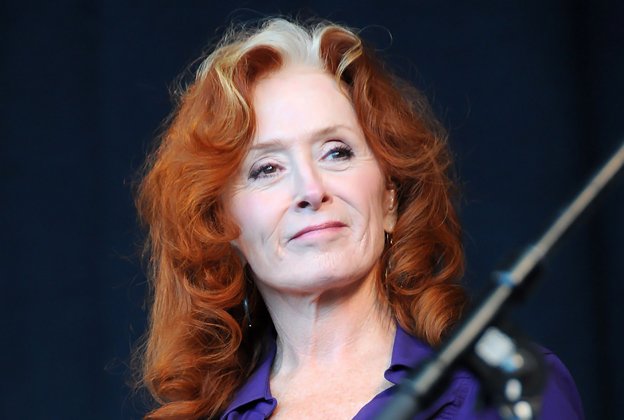 By the time Bonnie Raitt entered producer Joe Henry’s studio in late 2010, she’d been through what she calls “a heavy time.” Her parents had passed away in quick succession, and she took a long break from music to help care for her brother Steve, who died of brain cancer in April 2009. “I hadn’t had time to process it all,” she says. “I wanted to get off that treadmill.”

To ease her way back into music, she took up Henry’s offer to record at his basement studio in South Pasadena, California. Working with top-tier players such as guitarist Bill Frisell, they quickly cut four of the tunes – including killer, bluesy takes on Bob Dylan‘s “Million Miles” and “Standing in the Doorway” – for Slipstream, Raitt’s first album since 2005 (due April 10th). “The sessions were so inspiring that I fell back in love with music and got my appetite for it back again,” she says. “It was healing.”

“Her voice has lost none of its power,” Henry adds. “But it has extra smoke and nuance and life experience in there.”

Raitt recorded the other eight songs on Slipstream with her longtime touring band, including a reggae-tinged cover of Gerry Rafferty’s “Right Down the Line” and a funked-up spin on Randall Bramblett’s “Used to Rule the World.” “To me, that song is about the Occupy movement,” Raitt says of the latter. “It’s about the kind of hubris America has had, as if there are no consequences.”

Raitt, who parted ways with Capitol in 2006, will release the album on her newly formed Redwing Records. “I’ve been wanting to do my own label for a long time,” she says. One key benefit of recording without a major label? More of Raitt’s trademark slide guitar. “We let the guitar jams go,” she says. “That’s something I haven’t really done in the past. We left in the solos we would have normally cut out for singles. We just went for it.”

This story is from the February 2nd, 2012 issue of Rolling Stone.

Bonnie Raitt: A Brand-New Model For A Classic Sound

7 years after her last album, Bonnie Raitt is back in the game