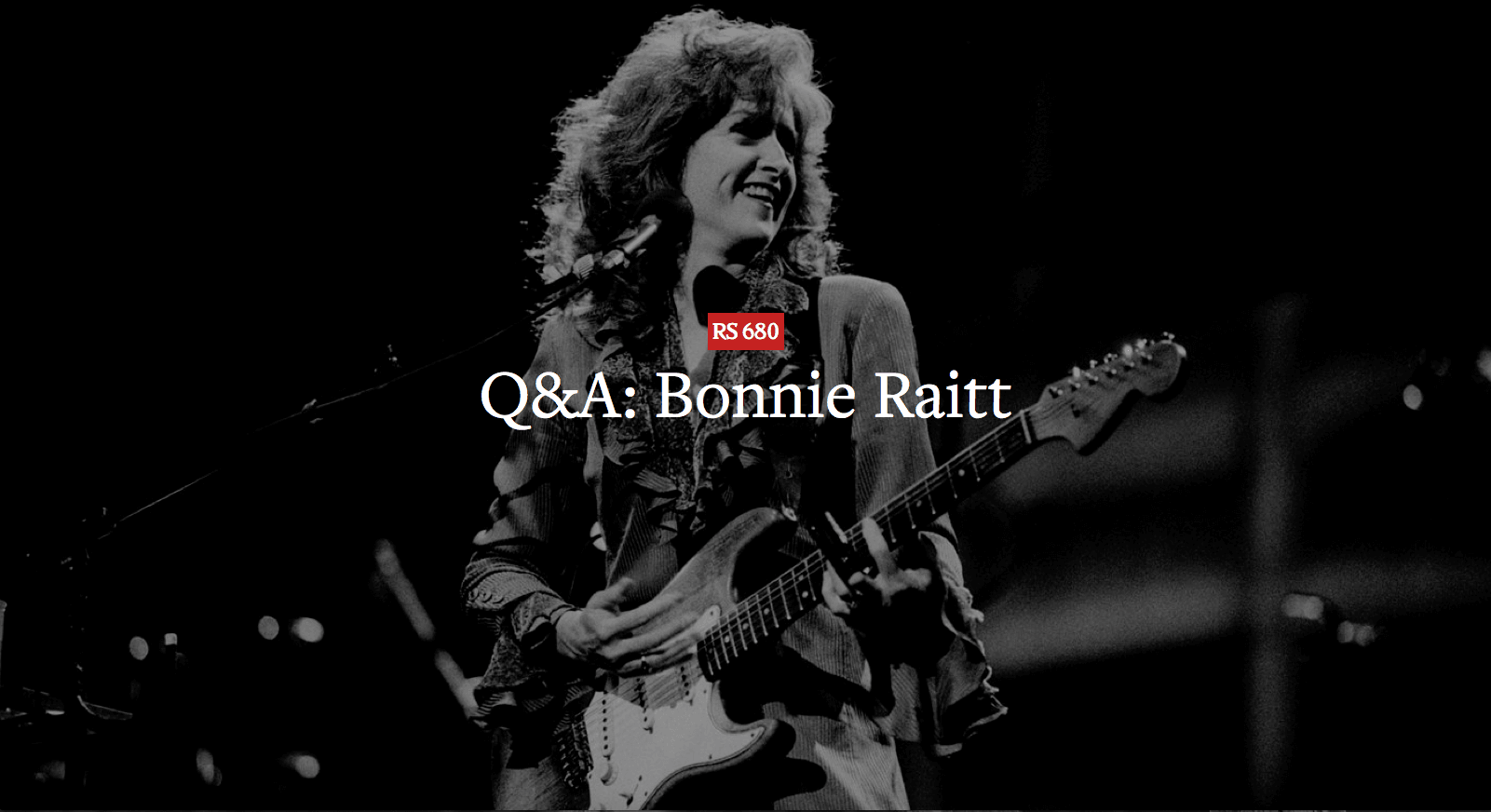 We all think we know the story of Bonnie Raitt. Still, it’s hard to slap a label on her. She spent her formative years hanging out in smoky blues clubs, but she also attended Radcliffe College. She has the image of a tireless activist, a woman who would seemingly go to a benefit for dandruff victims; but she also has a bawdy sense of humor (as she proved just prior to the interview, she’s not above the occasional penis joke).

Raitt was more of an enigma at the inception of her career – more specifically, she couldn’t get arrested. Now we can’t shake her. With the release of her fine new album, Longing in Their Hearts, the follow-up to the quintuple-platinum Luck of the Draw (itself a follow-up to the quadruple-platinum Nick of Time), she is, once again, everywhere. Including here.

Your new album almost seems to be the third part of a trilogy.
To me, they’re progressive, because it’s my life. So I’m glad if it’s perceived that way.

Why did you choose the song “Longing in Their Hearts,” which your husband, Michael O’Keefe, wrote the lyrics for, as your album’s title?
There’s usually only one out of the batch. And then for the next couple of years, everyone will be using that as a pun in the first line of a review. “This came just in the nick of time,” you know, or “It’s more than the luck of the draw.”

When he wrote that tune, were you involved? Did he solicit your opinion?
He’s a poet anyway, so he writes poems and lyrics, and then I sort of read what he’s writing. The song he wrote on the last record [“One Part Be My Lover”], he wrote specifically to me, and then I sort of snuck around and put music to it without telling him.

When you were growing up, how much of an influence did musical theater have on you, since your dad was in theater? Are you a fan of show tunes, for instance?
I liked my dad’s shows – it was the family business. I didn’t spend a lot of time looking at other people’s shows, because I had a fair amount of loyalty to my dad. I didn’t see the film versions of Oklahoma! and Carousel, because my dad was in those roles – it seemed like being a traitor.

Do you remember the first time you saw a blues artist, when you used to sneak away at school to see them?
I saw Brownie McGhee and Sonny Terry at the Ashgrove, the local folk club. I took my dad, because I was only 14, and I couldn’t drive. He wore a turtleneck, and he had sideburns, because he was still playing Billy Bigelow [in Carousel], and it was really cool. I was hoping everybody would think he was my date.

RELATED
Bonnie Raitt Inspires on Album ‘Just Like That…’

Blues clubs can often be boys’ clubs. When’s the last time you were a victim of sexism in the music biz?
I haven’t been, but in 20 years there still aren’t any women executives in the record business to speak of. Men are reviewers and radio people, and women are still in publicity and public relations.

There aren’t a heck of a lot of female pop stars over 40. Why do you think this is?
First of all, there’s a lot of them.

Not of your caliber. Let’s face it, with record sales …
I don’t know, I don’t like the term pop star. But there’s a ton of famous women in the music business. In the generation before me, there’s Grace Slick, Joni Mitchell, Joan Baez, Judy Collins. Chrissie Hynde, Tina Weymouth, Laurie Anderson. We’re all still doing the same job. If you’re good, you get to keep doing it. If you’re not good, you won’t. I’m hoping I’ll be able to sing and play when I’m in my 80s.

Is there anyone whom you’re surprised to hear you’ve influenced?
There’s a mixture of rock and blues and folk and country that’s sort of all over the map, so it wouldn’t surprise me if a jazz singer said, “I really like your records.” Jackson Browne and myself went through eras where everybody’s kids hated us, and now they think we’re cool.

Have you been to the set of Roseanne to see your husband?
Well, it’d be pretty rude for me not to go. After all, he does come to my gigs. They’re a really wild group of people.

Have you ever been tapped for a movie role?
Yeah, I’ve been asked, but I just don’t have time. I might do it eventually.

You’ve been sober for years. Does it get harder or easier as time goes on?
Well, living is difficult, period. Being happy and serene and all that stuff doesn’t get necessarily any easier just ’cause you’re more mature – or sober.

How do you survive bad weddings when you’re sober?
I haven’t been to a bad wedding. I’ve only been to a few, but I get really gooey at them.

This year, there has been an inordinate amount of benefit shows. Do you think people are getting benefited out?
Every single year of my whole life in music, I’ve been asked the same question. To me, it’s part of the obligation. I personally don’t think there’s enough benefits.

But… but…
If a person says, “I’m sick of reading about benefits,” then think about where you’re own head’s at. It probably means you’re guilty because you didn’t give enough money away! I don’t mean you personally.

Sure. What do you wish you had more time to do?
I’d like to spend time visiting the sweet little towns in Wyoming and Washington and Oregon. But because of cable and movies and the way society is, there’s very few hicks, you know? Even the teen-agers in those towns watch Beavis and Butt-head.

Last question: What would be your last meal?
Thai food. When I got sober seven years ago, I also changed my diet, and it’s really affected my energy. I never get sick. … I’ve been healthy and less than healthy, and healthy’s much better. Less than healthy’s more fun, but healthy is better.