The announcement ends widespread campus speculation about the identity of the artist. Singer Garland Jeffries will open the show, which will cap the threeday Quadrangle festival.

The announcement of the Raitt concert, which reportedly was agreed upon several months ago, was delayed by special conditions in the performer’s contract with the University. According to concert organizer Larry Osterman, a special price for Raitt’s appearance was secured on the promise that the free
Quad concert remain unannounced until the day of the show.

The purpose of this agreement, Osterman explained recently was to insure that ticket sales for a possible second Raitt concert in the Philadelphia area would not be hurt.

However, no other area appearance was arranged for Raitt, so the University contract was renegotiated. Osterman reported that if the announcement had
been made before today, Raitt’s managment would have had the right to both cancel her appearance and demand full payment as penalty for violation of the contract.

Concert organizers refused last week to reveal the exact cost of the concert. However, Spring Fling had been given an allocation of $7500 for the three day festival finale by the Student Activities Council.

Speculation over the headline performer for the Saturday night concert reached a peak last Friday when The Penn Press erroneously reported that the
group Renaissance would appear. Other acts which were widely rumored were, Meatloaf, Carly Simon, Art Garfunkel, and Chuck Mangione. All are appearing in the area at the time of Spring Fling.

Osterman said the release of the name was delayed until the eve of Spring Fling because “the earlier the word gets out, the more time it has to spread
through Philadelphia,” creating the possibility of an overflow crowd at the free event. 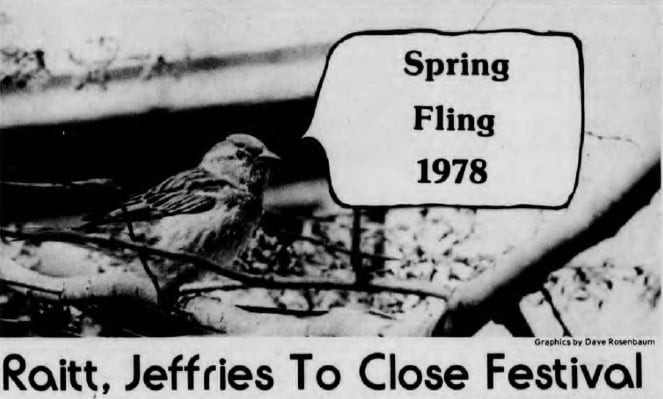 Osterman said he expected a crowd of approximately 12,000 to fill the Lower Quad for blues-specialist Raitt and rocker Jeffries. The concert will be held in the dormitory courtyard rain-or-shine due to the addition of an all-weather stage to this year’s fling. 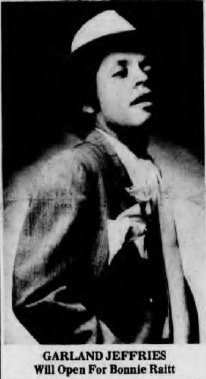 Raitt, a guitarist, plays a rock-and-roll style of folk-blues, and is backed by a small electric band. She has a large ‘cult’ following and she has drawn capacity crowds in Philadelphia for several years. She has appeared at the University often, most recently at Irvine Auditorium last April.

Raitt’s latest ablum is Sweet Forgiveness, a disc which combines her normally laid-back blues style with a tight rock sound. Not a particularly prolific composer, most of the songs on Sweet Forgiveness are written by other musicians in Raitt’s genre. Raitt is closely associated with recent campus attraction Little Feat, as Raitt has appeared on Little Feat albums as a background vocalist and performs a Bill Payne (Little Feat’s keyboard artist) composition on Sweet Forgiveness.

The 29-year-old rocker had a mild commercial success last year with “Runaway”, an old Del Shannon tune. However, she is not paricularly interested in hit singles, usually opting instead for a strong and devoted following generated by her albums and live performances.

Raitt, a Hollywood native and former Radcliffe student, traces her musical roots back to the nightclubs of Cambridge and Los Angeles. She is admittedly a female-oriented singer – she claims that most of her fans are women – but should be equally enjoyable to listeners of either sex.

Opener Garland Jeffries, who frequently appears with Raitt in concert, has been in the music business for a while but has developed neither a large following nor a sizable record catalogue. He is probably best known for his song “Wild in the Streets,” a Bruce Springsteen-type number, which was released several years ago. His music has been described as “gritty rock-and-roll” on his less-recent albums, but he may perform in more of a reggae style in his Spring Fling appearance.