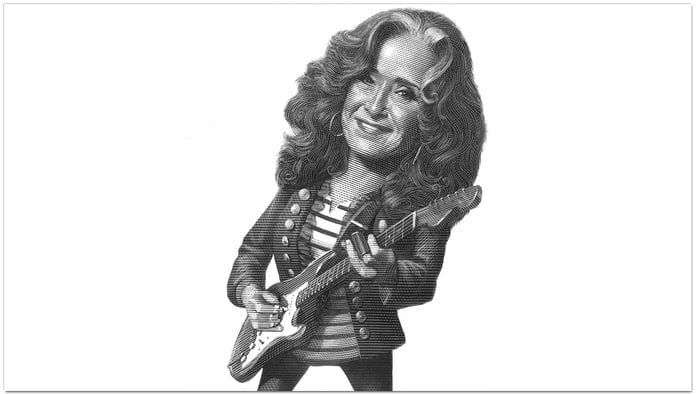 Bonnie Raitt was a little nervous before she and James Taylor played Boston’s Fenway Park in 2015, a venue bigger than she’s used to performing at. “The sound was great. I saw what a difference those high-def screens make. There wasn’t a bad seat in the house. It wasn’t alienating for people. It was such a great event, to put us two old fogies together.” This summer, the two will hit more stadiums, including Chicago’s Wrigley Field and San Francisco’s AT&T Park. Touring is just one of Raitt’s full-time jobs, which also include heavy activism for causes ranging from Standing Rock to getting musicians paid. Raitt spoke with Rolling Stone from her Northern California home about several of those topics, how to relax, her childhood growing up Quaker and what she learned from being dropped from her record label.

How do you relax when you’re at home in California?
Usually I spend the afternoon hiking. I love Marin County because there are a couple of dozen beautiful hikes within 30 minutes. Then I usually do an hour-and-a-half yoga class with one of my girlfriends – either Skyping or at one of our houses. That’s been really keeping me in shape the last five years. I also like having friends over to watch Netflix at night. I try not to watch anything too political in the evening – I don’t want to get too upset right before bed.

What did you take away from growing up Quaker?
It’s part of the reason I’m drawn to spending so much time in nature. Unlike being in a cathedral or having to look at icons – not to put anyone else’s religious practices down – being in nature is a spiritual connection for me. God – right now there’s a little squirrel in the tree looking right at me! Growing up, we worked hard to figure out what we could do to give back and to find peaceful ways to resolve conflicts around the world. A lot of my values come from that.

Your dad, John Raitt, was a legendary Broadway actor. What advice did he give you?
“Make every night opening night.” It doesn’t matter whether you’re playing Topeka, Kansas, or you’re playing on Broadway – that audience deserves the very best you have.

You dropped out of Harvard to play with several classic blues artists. What did you learn from them?
By my junior year I was opening for Mississippi Fred McDowell and John Hammond Jr. I was friends with the guy who booked a lot of my blues heroes. I fit on the bill because I was different and I could play a little bit of everything. I learned how to put a set together.  I learned from Mississippi Fred McDowell in particular – playfulness, and passion, how to go back and forth between rock and something mournful.

What’s the most indulgent purchase that you’ve ever made?
I love taking my friends out  to restaurants and putting together interesting groups of people. While some might say, “That’s too many people,” it’s an extravagance and I’m happy to do it. When I go out here, it’s more with activists. But in New York or L.A., I hang out with a lot of musicians.

What do you like about hanging out with musicians?
They get the joke. We call everyone else “civilians.” There’s a certain twisted sense of humor that comes with rock & roll musicians. A lot of them are professional partiers. We don’t have to go to bed if we don’t want to. So it’s constantly like going to never-never land in some ways. Even though we’re older, we still feel like we’re getting away with something.

“Not only is Father John Misty handsome, but he’s talented and hilarious.”

You were dropped from Warner Bros. in the early Eighties. What did that experience teach you?
Be with a company that really likes you! [Laughs] I’ve been a pretty savvy businesswoman since the beginning – I admit that I’m probably more of a businesswoman than I am an artist. I learned by watching people get ripped off. When I got involved with the Rhythm & Blues Foundation, I found out that all my record collection – my favorite artists – had never really received royalties.

Which young artists inspire you?
I’m really digging Father John Misty. I caught a couple of his late-night performances that he did recently, and I think he’s really smart and the kind of satire we really need right now. It took me a minute to realize that he’s playing a deliberate character – but the more I see him, the more I like him. Not only is he handsome, but he’s talented and hilarious. I was knocked out.

Did you have a favorite book as a kid?
To Kill a Mockingbird. When you’re a kid, you don’t know so much about the history: how the “First World” took over the rest of the world, the horrifying reality of slavery, what we did to Native Americans and how we took California and Texas. To Kill a Mockingbird was key in my awakening about the way the world really works.

You’re a longtime activist for causes like safe energy and getting money out of politics. How do you keep hope alive in the Trump era?
It’s a daily challenge to keep the fight going. There’s an expression that I first heard from Black Lives Matter, which is that people are “woke.” The election woke people up that we can’t be complacent. Election Day was my birthday, the last night of a nine-month tour. I’d gotten birthday cards saying, “For your present I’m giving you the first female president.” I came offstage and saw the faces of the people backstage reacting to the results. Then I went back out and sang “I Can’t Make You Love Me.” It was good to be able to do an extremely sad song. It was hard to contain my shock and dismay. But I’m encouraged by how upset people are.