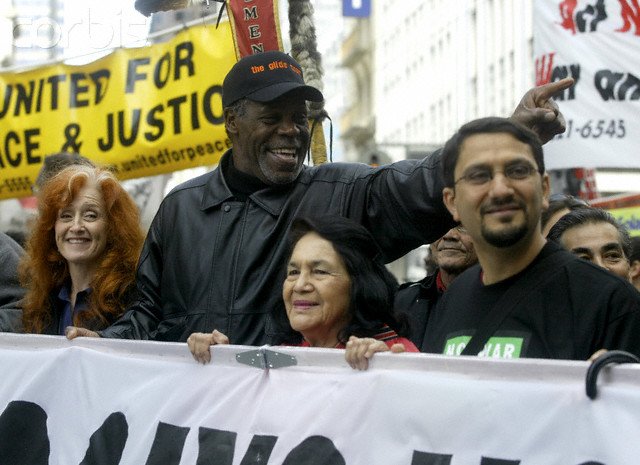 The anti-war demonstration began Sunday morning with an 11 o’clock rally at Justin Herman Plaza at the Embarcadero in San Francisco.

At around noon, the march began up Market Street toward the City Center Plaza.

Along the way, Chronicle photographers captured the sights — and signs — throughout the day.

“We know that we have not been shown enough evidence for a preemptive strike,” Raitt said. “There are a million people around the globe who have shown they feel the same way.”

Joan Baez was wonderful — and in addition she said when people ask her what’s different today from the vietnam war protests she said: people today are SO better organized,they are much more creative with signage etc, and most impt they started early – BEFORE a war, where hopefully they can prevent it, not just stop one already in progress.

{{svg_quality_icon}}
{{quality-options}}
1
http://i3.ytimg.com/vi/5YdBXBVAM6Y/hqdefault.jpg
This movie is 8 minutes excerpted from the 16 minute film contained in ‘SF Timecap 2000’, the DVD. SF’s Civic Center is the scene of this Sunday, Feb. 16, 2003 anti-war rally which is trying to oppose Bush/Cheney drumbeat for assault on Iraq using “Shock and Awe” brand of terrorism against Iraqi people. This event occurred on the Sunday after Saturday Feb 14, 2003 mass rallies against Bush’s war WORLD-WIDE totalling more than 15,000,000 people in the streets. 200,000 SF Bay Area citizens marched from Justin Hermann Plaza and then rallied in Civic Center against Bush’s intended felony armed robbery against Iraqi people to take their oil by violenc.
{{svg_quality_icon}}
{{quality-options}}
1
http://i3.ytimg.com/vi/3AYFSslegcA/hqdefault.jpg

She and Bonnie Raitt did a duet… but for me the highlight was hearing Bonnie Raitt belt out her version of Steven Stills’ ‘For What It’s Worth’ (stop, children, what’s that sound, everybody look what’s going down) — her voice is so powerful and visceral. It was beautiful.