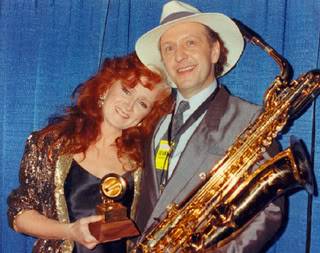 What a tragic beginning to a new year. I’m still stunned at the news of my longtime friend and musical collaborator, Marty Grebb’s sudden passing. I pray he is truly ’smooth sailin,’ free from his terrible pain and finally at peace. I send my love and deep condolences to all his beautiful family.
I am very grateful to have had Marty in my band off and on from the middle 70’s through the early 90’s. He was an incredibly talented songwriter and multi-instrumentalist, equally home on keys, vocals, guitar and sax as he was one of the most soulful singers I’ve known.
He was also a great inspiration for my getting sober in ’87. We will remember him always and honor the gift of friendship and music he gave us.
Here are some of my favorites:
— Heartbreaker (from his High Steppin’ album, 2011)
— Soul Mate, a duet we did on his Smooth Sailin’ album in 1999.

Marty Grebb was born into a musical family in Chicago on September 2, 1945. His dad Harry was an accomplished saxophonist, who played in the big-band era. Marty began learning music at the age of 8. His brother was a masterful guitarist who has written music instruction books etc. At the age of 12, he joined his first band, and played with some older musician until the age of fifteen when he formed a new band, “The Exceptions,” with Peter Cetera, his high school buddy. By age sixteen, Marty met Calvin Carter at Vee Jay records, who signed him to a record deal which then opened the door to him meeting other popular musicians. During this time, he appeared on many popular TV shows including the Ed Sullivan Show, The Smothers Brothers Comedy Hour, The Tonight Show, The Jerry Lewis Show, and The Merv Griffin Show just to name a few.

In 1966, the Buckinghams, a local Chicago band that actually was a fan of “The Exceptions,” lost its keyboard player and asked Marty to join. The Buckinghams went on to achieve six, top-ten, national selling hits together with Marty for Columbia Records and three top-twenty albums. He shared lead vocals with Dennis Tufano on “Mercy, Mercy, Mercy.”

In 1969, Marty moved to Los Angeles and was asked to join the band, Lovecraft, which was being managed by Bill Graham. From that band, he moved on to The Fabulous Rhinestones, and returned back east to continue his musical journey. He co-produced their first album. The Fabulous Rhinestones became the opening act for many groups such as Sly and the Family Stone, The Eagles, and the Doobie Brothers. Marty even got to play with John Lennon at a Peace Festival held in New York City. During this time out east, he also had some recording sessions with Paul Butterfield, David Sanborn, Tito Puente, Jack DeJohnette, and Joe Walsh while up in Woodstock, NY.

All of this took place around 1972 when he met Bonnie Raitt, who was recording her second album, “Give it Up,” and had asked Marty to play on the album. Here he played tenor sax on her version of Rudy Clark’s ‘If You Gotta Make a Fool of Somebody’ and alto sax on ‘You Told Me Baby.’ Marty played on many of Bonnie’s albums, including the classic Nick of Time (‘Love Letter’ and ‘I Will Not Be Denied’), Longing in Their Hearts (‘I Sho Do’), Road Tested, and the last one, Fundamental.

He moved back to Los Angeles in 1974 and began playing with Leon Russell, Bonnie Raitt, Etta James, Greg Allman, and Bonnie Bramlett, and he also did some recording with members of the group Chicago. He played with so many – what a career he had. Over many years in the industry, he played with the best of the best, including John Lennon, Elton John, Eric Clapton, Willie Nelson, Stevie Nicks, Tanya Tucker, and others including most recently, The Weight Band. Below is a posted, more comprehensive listing of his musical life, collaborations, and brilliance.

Who was Marty Grebb you ask? He was a multi-instrumentalist and highly talented musician who had an amazing career.

There are many condolences posted across Facebook and the internet.

RELATED
Bonnie Raitt and Mavis Staples in a WW Bubble

Taken from the Facebook Page of “The Weight Band”

“Our hearts are heavy with the news of our brother, Marty Grebb’s passing. We want to send heartfelt condolences, thoughts, and prayers to his loving family, friends and fellow musicians. Sometimes we don’t understand a person’s journey – but we do need to have compassion. Marty was a great friend, an amazing musician and a tremendous asset to The Weight Band during his tenure with us. He has been -and will continue to be missed. We pray he’s found his peace. With love, sadness and respect: Jim, Brian, Albert, Michael, Matt, Randy, Byron, Mark, Tony and Barbara.”

Marty Grebb’s death is a loss to the musical community, but it’s an even bigger loss for his family and friends. As we start this new year, it is important to remember that everyone has a struggle, we just may not know what it is. What we do know is that feelings are real. In this case, he was suffering from the pain of a terminal illness and the pain of a broken heart.

RELATED
RAITT WORTH HER WEIGHT IN HEAVY, HEARTY SOUNDS