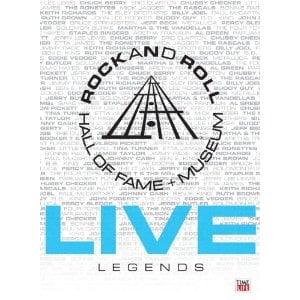 Following on the success of the critically acclaimed, triple-platinum ‘Rock And Roll Hall of Fame: LIVE’ 3-DVD set, Time Life has announced the release of a new, exclusive DVD set featuring more historic performances from the legendary Rock Hall vaults. The ‘ROCK AND ROLL HALL OF FAME LIVE: THE LEGENDS’ boasts 46 remarkable performances by the most influential and significant figures in rock music history, as well as the speeches, toasts and roasts by which these members of rock royalty salute each others’ accomplishments. History is made when legendary artists such as Chuck Berry, Little Richard, Aretha Franklin and Al Green take the stage for once-in-a-lifetime collaborations. The ‘ROCK AND ROLL HALL OF FAME LIVE: THE LEGENDS’ includes three DVD’s featuring an assortment of performances spanning more than two decades of ceremonies, as well as induction and acceptance speeches, and never-before-seen backstage and rehearsal footage.
Among the highlights of the collection, available on May 25th, are:
-Chuck Berry, Jerry Lee Lewis, Keith Richards, Bruce Springsteen and many others perform a rollicking version of Berry’s classic ‘Roll Over Beethoven.’
-Jimmy Page and Jeff Beck stage a guitar duel on ‘Beck’s Bolero.’
-Paul McCartney leads an all-star tribute to Carl Perkins performing ‘Blue Suede Shoes.’
-The 3 surviving members of The Doors are joined by Pearl Jam’s Eddie Vedder for ‘Break On Through.’
-Bruce Springsteen and Wilson Pickett share the stage for Pickett’s classic ‘In the Midnight Hour. ‘

Also included in the deluxe DVD set are over four hours of bonus material, including behind-the-scenes and rehearsal footage, as well as candid induction and acceptance speeches.
Each year, the Rock and Roll Hall of Fame honors rock music’s pioneering figures during prestigious, black-tie ceremonies. Rock’s biggest stars induct their biggest influences and contemporaries, with heartfelt, wise and witty speeches. Over the years, Paul McCartney has inducted John Lennon, Paul Simon has inducted Stevie Wonder, Steven Tyler has inducted AC/DC, Elton John has inducted The Beach Boys, and in turn, Elton John was inducted by Axl Rose. But, it’s during the live performance part of the ceremony when rock history is really made.
With egos set aside, the artists take the stage and deliver once-in-a-lifetime performances, often with a truly mind-blowing combination of talent, such as Mick Jagger performing with Bruce Springsteen, R.E.M. with Eddie Vedder, The Band with Eric Clapton, Jeff Beck with Jimmy Page. As Robbie Robertson once commented, ‘It’s an opportunity to see musical combinations we may never see again as long as we live.’

Disc 1: “Feelin’ Alright”:
1.Bill Graham The Rock & Roll Hall of Fame First Ceremony 1986.
2.Jerry Lee Lewis, Chuck Berry, & others, and even though it’s not mentioned in the Table of Contents, you get the late/great Stevie Ray Vaughan in plain view, playing his heart out on his guitar on this song. What a pleasant surprise. The song: “Roll over Beethoven”. This was filmed in 1986. Stevie Ray was killed in a helecopter crash in 1990.
3.Little Richard, “Tutti Frutti”.
4.Do Diddly Acceptance Speech, Bo with Robbie Robertson & Eric Clapton “Bo Diddley”.
5.Eric Clapton Acceptance Speech, Eric with Robbie “Farther on up the Road”.
6.Little Richard inducts Otis Redding, Little Richard “Sittin’ On the Dock of the Bay”
7.Tina Turner inducts Phil Spector, Tina & others “River Deep – Mountain High”.
8.Etta James Acceptance speech, Etta James “At Last”.
9.The Isley Brothers & others “Shout”.
10.Chubby Checker & others “The Twist”. This is another performance from 1986, and again, you get the late/great Stevie Ray Vaughan in plain view, playing his guitar, and really enjoying the song.
11.Keith Richards inducts the Ronettes, The Ronettes “Be My Baby”.
12.Little Richard, Mick Jagger, & others “I Can’t Turn You Loose”.
13.Tom Hanks inducts The Dave Clark Five, Joan Jett, John Mellencamp, John Fogerty, & Billy Joel “Glad all Over”.
14.Little Steven Van Zandt inducts the Rascals, “People Got to Be Free”.
15.Traffic Acceptance Speech, Dave Mason & others “Feelin’ Alright”.
16.James Taylor & others “How Sweet it is to be Loved by You”.
17.Jeff Beck/Jimmy Page “Beck’s Bolero”.
18.Kid Rock/others “Sweet Little Rock & Roller”.
19.Chuck Berry/Bruce Springsteen & E Street Band “Johnny Be Good”.

Bonnie Raitt inducted into the Rock and Roll Hall of Fame