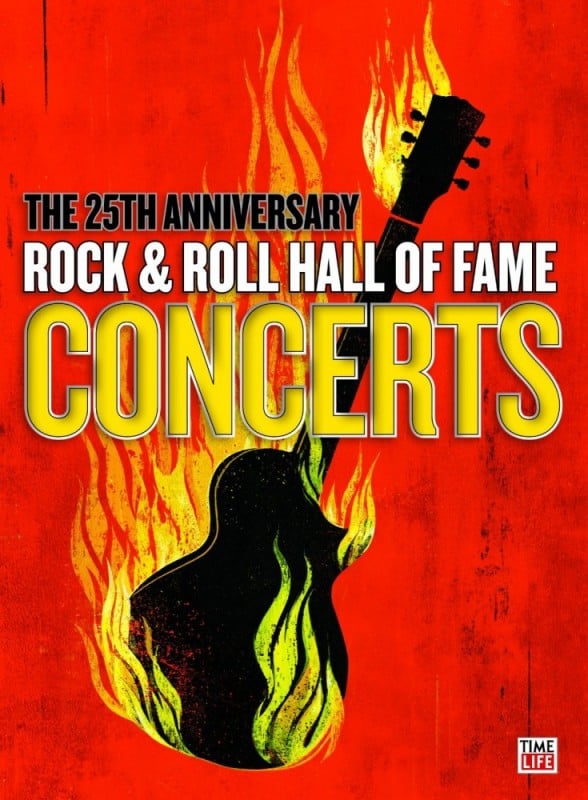 The Rock and Roll Hall of Fame will mark its 25th anniversary with two all-star concerts this week at Madison Square Garden in New York. Here’s the rundown for each night’s bill (with headliners in bold, followed by their special guests):

As far as star-studded concerts go, the Rock and Roll Hall of Fame’s back-to-back 25th anniversary shows this week at Madison Square Garden in New York promise to outshine most.

Despite the hint of incredulity in his voice, Nash wasn’t complaining. After all, his group will be in stellar company Thursday night, with Paul Simon (performing solo and with Simon and Garfunkel), Stevie Wonder and Bruce Springsteen and the E Street Band also on the bill.

The lineup for Friday night’s concert doesn’t want for luminaries, either, with Metallica, Eric Clapton, Aretha Franklin and U2 ready to shine.

Joining the main attractions onstage will be a cavalcade of famous guests, including Rock Hall inductees such as Jeff Beck, Little Anthony and the Imperials, Ozzy Osbourne, Smokey Robinson and Sting.

Net proceeds from the shows, which will cost $9 million to put on, are earmarked for the endowment of Cleveland’s Rock and Roll Hall of Fame and Museum. Organizers hope to raise $4 million. Both nights are nearly sold out, with approximately 13,000 tickets sold for each date. (Madison Square Garden can accommodate 20,000 people, but an extra-large stage will limit capacity.)

For his part, Nash is as excited about catching the other performers as he is about CSN’s performance.

“It’s safe to assume that we won’t be splitting after our set,” he said by phone last week from his home on the Hawaiian island of Kauai. 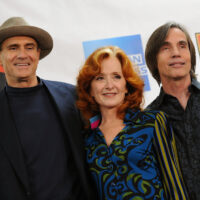 Bonnie Raitt attends the 25th Anniversary Rock and Roll Hall of Fame Concert at MSG – NY
If there was a single word that summed up the first Rock and Roll Hall of Fame 25th anniversary concert Thursday night, it was “legacy.” Backstage, artist after artist spoke of the importance of musical heritage, emphasizing the icons who influenced them as they delivered awe-struck commentary on the show’s spectacular

CSN was enshrined in the Rock Hall in 1997. Nash’s previous band, the Hollies, have been nominated for induction next year.

During their performance, David Crosby, Stephen Stills and Nash will showcase the singer-songwriter tradition in rock ‘n’ roll, with an emphasis on the West Coast’s golden era in the ’60s and ’70s.

They planned their segment with input from Rock Hall officials.

“They wanted Jackson and James, and we suggested Bonnie,” Nash said.

That would be Jackson Browne, James Taylor and Bonnie Raitt, who will make cameo appearances during CSN’s set.

“We’ll probably open with ‘Woodstock,’ which we only did once on our last tour,” Nash said.

Details are subject to change, Nash added, although this much he knows:

In separate interviews, concert organizers said their goal is to tell the history of rock ‘n’ roll across eight thematic segments, with four segments per evening.

Wonder will celebrate Motown, for instance. Clapton will pay tribute to the blues. And Metallica will state the case for hard rock — deafeningly, no doubt.

“These aren’t just greatest-hits concerts,” said Jann Wenner, editor and publisher of Rolling Stone magazine and chairman of the New York-based Rock and Roll Hall of Fame Foundation, which runs the museum in Cleveland in conjunction with a local board.

“We’ve asked everybody . . . to do some performances in combination with other performers, which nobody has seen before or likely won’t see again,” Wenner said. “There will be a lot of uniqueness.”

Each show is expected to run four hours, with brief films setting the stage for each segment and providing historical context.

One film will trace the connections between rock ‘n’ roll and gospel music, against a broader cultural backdrop.

“It deals as much with the experience of being black in this country as it does with the music,” Wenner said. “Then Aretha takes the stage. It’s going to be very powerful.”

The Rock Hall hasn’t thrown a party on this scale since 1995, when the opening of the museum here was celebrated with a marathon all-star concert at the old Cleveland Municipal Stadium.

The 25th anniversary shows have been in the works since 2008. Early on, organizers floated the idea of simultaneous concerts in multiple cities, only to settle on a two-night stand in New York as the most viable option.

“It’s so much easier doing it here than in any other city, logistically,” Wenner said.

“It’s the most historic venue you’ve got in rock ‘n’ roll now,” Wenner said. “Nothing else comes close, in terms of an arena.”

The concerts will not be broadcast live, but a four-hour television special of highlights will premiere at 8 p.m. Sunday, Nov. 29, on HBO. The Rock Hall plans to release a DVD of performances from the anniversary shows early next year, too.

Organizers also have lined up TV deals for the concerts in 20 other countries, from South America to Europe to Asia.

“They’re going to be seen all over the world, which raises the profile of the Hall of Fame,” said Joel Peresman, president and CEO of the Rock and Roll Hall of Fame Foundation.

“It proves that in good times and bad, people can really come together to celebrate music,” Peresman said.

“That’s really what the museum [in Cleveland] is all about. It’s the only place in the world that celebrates this art form of rock ‘n’ roll.”

Van Morrison had been announced as part of the lineup, but he had to bow out because of a scheduling conflict, Peresman said.

The creative team behind the concerts also includes Robbie Robertson of the Band and Hollywood veterans Cameron Crowe and Tom Hanks.

“This is amazing stuff,” said Hanks, whose Playtone production company is putting together the HBO special.

“It ends up being a labor of love,” Hanks said. “Look — I’d do it just for the all-access pass that I’m going to have hanging around my neck!”