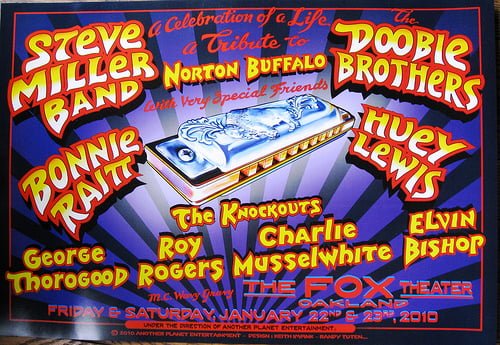 OAKLAND — Nobody wanted it to happen. They all wished there was no need. Yet, they showed up to pay tribute to their fallen comrade Norton Buffalo, who died at age 58 on Oct. 30 after battling lung and brain cancer.

“We are going to miss him,” remarked the Doobie Brothers’ John McFee. “But the idea is for Norton to be here while we’re playing.”

And he was — at least in the hearts and thoughts of the performers and the sold-out audience that turned out to the “Tribute to Norton Buffalo: A Celebration of a Life” concert on Friday night at the Fox Theater in Oakland. The concert — which repeats tonight at the same venue — turned out to be a moving night of music that did justice to the great legacy of the Oakland-born, Richmond-raised harmonica hero.

The cast included Bonnie Raitt, the Doobies, Steve Miller, George Thorogood and Elvin Bishop, as well as many other artists that had worked with Buffalo over the decades. They gave of their time for many reasons — not the least of which was to raise money to help Buffalo’s family with the medical expenses incurred during the harmonicat’s illness. Perhaps the main reason, however, is that they knew Buffalo would have been there for them.

“If there was a good cause,” Maria Muldaur remarked during her time onstage with Bonnie Raitt, “Norton was there.”

That’s one of the reasons Buffalo was so popular in the local music community — by all accounts, he was an extremely generous and giving man. It’s that trait, more than all the platinum records that he played on as a sideman, which defines his legacy. It also explains why organizers were able to easily assemble such an impressive lineup for these tribute shows.

Following an opening set by Buffalo’s old band the Knockouts, Raitt took the stage and performed a blues-soaked set of solid tunes. Raitt, who’d enlisted Buffalo’s services on 1977’s “Sweet Forgiveness,” was joined by guests including Muldaur, harmonica guru Charlie Musselwhite and slide-guitarist-supreme Roy Rogers. Raitt was in fine voice and spirits throughout the set.

RELATED
Bonnie Raitt Remembers Record Exec Joe Smith, Who Signed Her Twice: 'He Really Nurtured Me as an Artist'

“Buff-a-palooza!” she howled to the crowd. “That’s what we got going on.”

The Doobie Brothers, who utilized Buffalo’s mighty talents on their Grammy-winning 1978 album “Minute by Minute,” followed Raitt and turned in what was surely the set of the night. The seven-piece band, which featured two drummers and three guitarists, chugged through a dozen great tunes that, collectively, screamed that the Doobies deserve to be enshrined in the Rock and Roll Hall of Fame.

The group, which was joined by Elvin Bishop for a few numbers, displayed mesmerizing harmonies and ace musicianship throughout the set. Some might’ve forgotten just how many stand out songs the Doobies have in their catalog, but the steady succession of hits performed at the Fox — including “Jesus is Just Alright,” “Listen to the Music,” “China Grove” and “Black Water” — served as a joyous reminder. It was odd, however, that the band shied away from playing the big hits from “Minute by Minute,” given that Buffalo appeared on that album.

The headlining slot was reserved for Buffalo’s best-known collaborator, Steve Miller. The two began making music together in the mid-’70s and Buffalo remained in Miller’s band for the rest of his life.

It was a treat to see Miller, who is accustomed to playing large outdoor amphitheaters, perform in a relatively intimate venue. He certainly provided plenty of bang for the buck by delivering a two-hour set.

Miller was joined by numerous guests, including Raitt and Thorogood. Unfortunately, Huey Lewis, who was scheduled to perform with Miller, didn’t make it. Miller announced that Lewis was stuck in Montana, which was a shame, since it would’ve been fun for fans to see the two Bay Area music legends trade vocals.

As expected, Miller connected most strongly with the audience when he booked through his greatest hits. Thousands of voices joined in the choruses to such favorites as “Take the Money and Run,” “Jet Airliner” and “Jungle Love.”

There was, of course, one voice missing, one that will be missed for years to come.