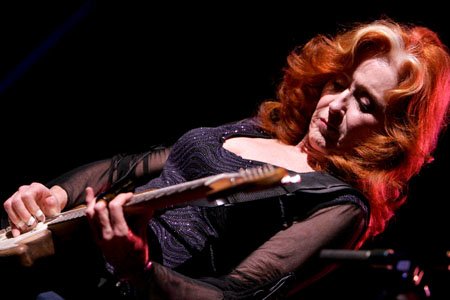 A day after her former guitar player and friend of 38 years, Stephen Bruton, passed away, Bonnie Raitt ended her pre-encore set at Bass Concert Hall by thanking the audience for being there. “I’ve been crying all day and I never thought I’d get through this show.’ she said.

She finally broke down in tears after encoring with one of Bruton’s songs, ‘Too Many Memories (For One Heart To Hold).’ The redhead sang it beautifully with tears streaming down her cheeks near the end. A dry eye? Not in this house.

It was an emotional night and a special one, with the crowd of about 2,300 leaping to their feet after “Angel From Montgomery” (dedicated to Bruton’s wife Mary and mother Kathleen) and stomping along with Raitt and guest Kim Wilson (Fabulous Thunderbirds) on “I Believe I’m In Love With You.” Then, on ‘I Can’t Make You Love Me,’ Raitt aired it out with such pure and powerful purpose that the crowd was overwhelmed by the moment.

After an impressive set from Paul Thorn, who could be called Mississippi’s John Hiatt if he didn’t put so much Pentecostal fire into his sound, Raitt came out and talked to the crowd a bit about Bruton, who lost his battle with cancer. “Stephen Bruton is in our hearts tonight and forever,” she said, She also dedicated the first song “Talk To Me” to Poodie Locke and his family. “I can’t tell you how much it means for us to be in Austin,” she said, easing her way into the music.

It’s been a rough week for the Austin music scene, but Raitt was the right performer to start the healing. She mentioned Bruton after almost every song, noting how she couldn’t look at him onstage when he was in her band because they’d always crack each other up midsong. Her voice quivered when she realized that she’d never again see Bruton waiting in the wings to be called out to jam.

But there were also laughs, as when Johnny Nicholas of Fredericksburg came out to add harmonica to “Love Me Like a Man” and noted that Bruton loved to get dressed up. “He also liked to get undressed,” Raitt shot back. “I never witnessed that. Maybe that’s why we were friends for so long.”

The way it usually works when a musical icon dies is that a tribute concert is planned for a few weeks down the road. With Sunday’s Raitt concert already booked, it turned into an impromptu memorial show. But the musicianship of Raitt and her band (kudos to new keyboardist Ricky Peterson) kept it from being overly sentimental, even as the star seemed genuinely touched by the outpouring of love.

There’s long been a special relationship between Austin and Bonnie Raitt, but the bond has never been stronger than on Sunday night.