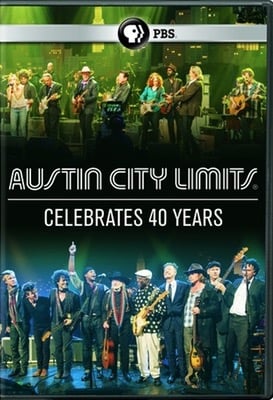 An all-star lineup of ACL royalty pays tribute to the show’s enduring legacy with unforgettable music performances in Austin City Limits Celebrates 40 Years. Highlights of the special include the show opener as Bonnie Raitt, Alabama Shakes’ Brittany Howard, Jimmie Vaughan and Gary Clark Jr. team up for the Sam & Dave classic “Wrap It Up”. Incredible pairings include ACL Hall of Fame legend Willie Nelson and Emmylou Harris on the Nelson-penned classic “Crazy” and Kris Kristofferson and Sheryl Crow‘s moving take on his signature “Me and Bobby McGee”. The Foo Fighters honor ACL with a wild rendition of Texas cult hero Roky Erickson’s “Two Headed Dog,” recorded at the show’s original television studio especially for the occasion. Host Jeff Bridges performs the late singer-songwriter Stephen Bruton’s song “What A Little Bit of Love Can Do” as a tribute to the influential Austin musician who inspired Bridges’ Oscar-winning portrayal in Crazy Heart.  Local legends Joe Ely and Robert Earl Keen showcase their troubadour roots and significance to the Austin music scene. Breakout artists and ACL alumni Alabama Shakes and Gary Clark Jr. give blistering performances that forecast the future of the series. Blues titan Buddy Guy brings it all home with an electrifying take on his “Mary Had A Little Lamb”.  The special comes to a close with an all-star reading of two Lone Star classics—a stellar lineup of guitar slingers blaze through the Stevie Ray Vaughan standard “Texas Flood” and the biggest names in music trade verses on the Buddy Holly classic “Not Fade Away”, as ACL embraces its past and hints at what is to come.

“This is a huge milestone for us,” says ACL executive producer Terry Lickona, “and this show captures the essence of what Austin City Limits is all about. We set the bar high for this celebration, and we exceeded it! The lineup of talent speaks volumes about the respect that artists have for ACL.”