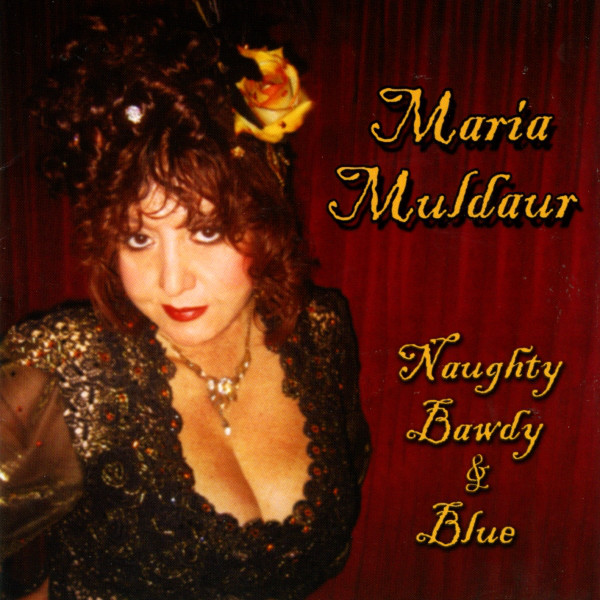 EDMONTON, AB – Stony Plain Records has announced a May 15 release date for Maria Muldaur’s new CD, Naughty, Bawdy & Blue, which completes the trilogy of albums the acclaimed singer has released as a tribute to classic women blues singers from the 1920s through the 1940s. Both of Maria’s previous albums in this series for Canadian label Stony Plain, which is distributed in the U.S. by Navarre Corporation, were nominated for Grammy Awards: Richland Woman Blues (2001) and Sweet Lovin’ Ol’ Soul (2005).

Bonnie Raitt makes a special guest appearance on Naughty, Bawdy & Blue singing a duet with Maria on “Separation Blues,” a song written by Sippie Wallace, with whom Bonnie toured in the ’70s and ’80s. Both Maria and Bonnie sang the song with Sippie prior to her death in 1986.

“How great to hear these classic blues again, done up right by one of my favorite singers and the incredible James Dapogny’s Chicago Jazz Band,” says Bonnie Raitt about the new album. “I loved joining in on Sippie Wallace’s ‘Separation Blues’!”

Backing Maria Muldaur on most of the album is James Dapogny’s Chicago Jazz Band (who often performed with Sippie Wallace), which provides the perfect accompaniment of instruments (clarinet, sax, trumpet, trombone, tuba, banjo, guitar, piano, bass and drums) to these songs, a sassy mix of blues and jazz. Other guests on the CD include Dave Mathews on piano and Kevin Porter on trombone. Naughty, Bawdy & Blue was produced by Maria Muldaur and Ron Harwood and recorded at Solid Sound in Ann Arbor, Michigan.

In addition to Sippie Wallace, the other blues queens saluted on the album include Bessie Smith (“Empty Bed Blues,” “A Good Man Is Hard To Find”), Victoria Spivey (“TB Blues,” “One Hour Mama”), Alberta Hunter (“Early Every Morn”), Ma Rainey (“Yonder Come The Blues”) and Mamie Smith (“Down Home Blues”), as well as songs made famous by Ethel Waters and Sara Martin, plus another Sippie Wallace classic, “Up the Country Blues.”

As a young girl growing up in New York City’s Greenwich Village, these are the songs – and the women – who helped inspire Maria to sing and perform, eventually joining the burgeoning folk scene as a member of the Even Dozen Jug Band and later the Jim Kweskin Jug Band. It was also around that time that Maria met Victoria Spivey, who took her under her wing and taught her the finer points of blues singing and performing.

“These singers presented a more sophisticated, polished and urban blues style compared to the more primitive sound of the Delta blues artists,” says Muldaur in the album’s liner notes. “Appearing in large theaters, decked out in lavish finery and accompanied by the most accomplished jazz musicians of the day, their music resonated at the crossroads where jazz and blues meet. These women were ‘liberated’ way before the term was coined; liberated socially, financially and – most of all – sexually from the prevailing confines and mores of the time.”

Naughty, Bawdy & Blue includes extensive recollections from Maria Muldaur on these women singers and their impact on music, as well as individual bios of the women saluted and beautiful watercolor paintings by Rowland Salley of Chris Isaak’s band, who also contributed his work to both previous Muldaur albums on Stony Plain.

Maria Muldaur will tour extensively in support of Naughty, Bawdy & Blue, and is booked by Charlie Ellicott of Ellicott Talent Group.

Source: © Copyright All About Jazz