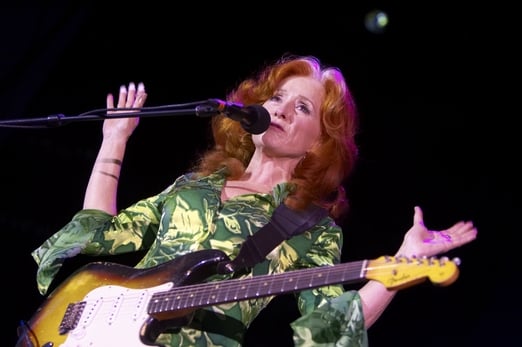 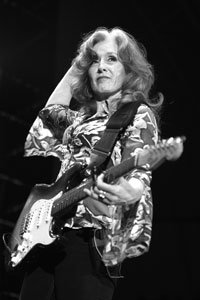 “This has been a heavy week,” Bonnie Raitt said, welcoming 3,000-plus fans to the newly revamped Charlottesville Pavilion in a sold-out Sunday night performance benefiting the Charlottesville Free Clinic. “So let’s just gather together, count our blessings, and dedicate this to the folks at Virginia Tech.”

Under the giant fabric dome and before a constantly moving backdrop bathed in red light, Raitt, in a shimmery green blouse, proceeded
to rock out, although she did pause to boast of her biodiesel-fueled fleet of tour vehicles. “Alternative energy, baby,” said Raitt. “It’s safe, and we don’t have to go to war over it.” 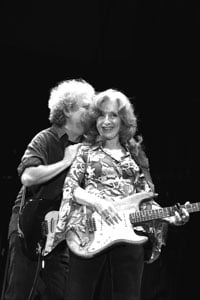 The mostly short-sleeved crowd, enjoying a respite from the chilly days that preceded the concert, erupted long before the russet-haired guitarist got to her bluesy country crossover hits including “Thing Called Love,” “I Can’t Make You Love Me,” and the one that quashed the celebrity hopes of Sanjaya Malakar, the would-be American Idol voted off the star-winnowing television program just four days earlier. He had performed Raitt’s trademark hit “Something to Talk About” to the howls of the celebrity judges (and apparently the public).
“Let’s give ’em something for Sanjaya to talk about,” declared Raitt to laughter and applause.

An emotional climax came soon after when she announced she’d play a John Prine song, “Angel from Montgomery,” a mournful ballad of an unfulfilled life.
“I thought about those folks from Virginia Tech during that whole song,” said Raitt as the crowd offered a standing ovation. “Virginia is for lovers, indeed.”