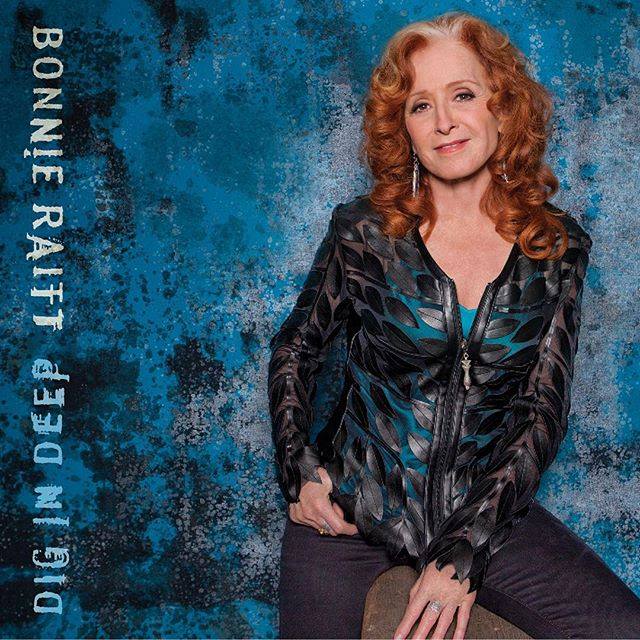 On February 26, 2016, Rock and Roll Hall of Famer Bonnie Raitt will release ‘Dig In Deep’, her twentieth album, on Redwing Records, her own, independent label. The record follows Bonnie’s hugely successful 2012 release ‘Slipstream’, which was one of the best-selling independent albums of 2012 and earned Bonnie a GRAMMY for Best Americana Album — her tenth career GRAMMY win.

“The response to ‘Slipstream’ was such a refreshing and unexpected boost,” says Raitt. “So going into this album, I had renewed energy.”

The pre-order for ‘Dig In Deep’, which will be distributed globally by ADA, begins on November 6. Raitt, who is now being booked worldwide by CAA, will shortly announce tour dates for 2016; pre-sales for those shows will start on November 10, with public on-sales to follow on November 13.

As a working musician, Bonnie Raitt has often lived an itinerant life. That made it easy to step into the persona of her new song, “Gypsy in Me.”

Shot by Jason Farrell, the clip features footage from a recording session as Raitt and her band cruise through the song in the studio. Guitarist George Marinelli lays down a slinky blues riff as he works on a piece of chewing gum, while Raitt peels off slide guitar licks and sings in warm, rich tones. “Gypsy in Me” marks the fourth time the singer has recorded a song that Gordon Kennedy and Wayne Fitzpatrick have had a hand in writing.
“We’ve gotten very comfortable having Jason Farrell be our ‘fly in the wall’ videographer during our recording sessions,” Raitt says.

“I was thrilled when they said they’d custom-written a new one just for me, and I knew when I heard ‘Gypsy in Me’ it would fit the band and me like a glove,”

“I’m excited to finally have my first lyric video coming out along with the release of our first single, ‘Gypsy In Me,’ later this week…New album, Dig In Deep, comes out Feb. 26th, followed by our two-year world tour. Can’t wait to hit the road!”

Bonnie and Redwing Records are proud to premiere the lyric video for “Unintended Consequence of Love,” the lead track from her forthcoming album Dig In Deep set for release this Friday, February 26th! Bonnie wrote this song with New Orleans singer, songwriter and keyboardist Jon Cleary, who recorded and toured with Bonnie as a member of her band for 10 years (and who won his first Grammy Award last week for his album, Go Go Juice!) Hope you enjoy!

Feeling that her recent, two-year-long tour was one of her best ever, Raitt was eager to get her touring band back in the studio. She again produced the album herself (other than one track taken from her 2010 sessions with Joe Henry), and brought Ryan Freeland back as the project’s engineer. Notably, Raitt has writing credits on five of the album’s songs, the most original compositions she has contributed to a record since 1998’s ‘Fundamental’.

“I was really inspired to come up with some songs that went with grooves that I missed playing in my live show, and to dig deeper into some topics I hadn’t yet mined,’ she said. “I don’t write easily and can get distracted, but remembering how satisfying it was to come up with something new of my own, and writing with guys I love—like my longtime bandmates George Marinelli and Jon Cleary—I found that once the wheels started turning, the music came pouring out.”

Debuting in the Top Ten, ‘Slipstream’ marked not only Raitt’s first release on her own label, but her biggest chart success in two decades. The album was praised as “gripping” (New York Times), “masterful” (Hollywood Reporter) and “emotionally searing” (Variety). Simply put, it was embraced as “one of the best of her 40-year career” (American Songwriter).

Now, with ‘Dig In Deep’, Raitt returns with her characteristic, incomparable blend of blues, rock, R&B, and pop, and a healthy dose of the signature slide work from the woman Rolling Stone named one of the “100 Greatest Guitarists of All Time.”

“I’m feeling pretty charged, and the band and I are at the top of our game,” says Bonnie Raitt. “I think all these years together pay off, and the best part is that we know how lucky we are to still get to make our livings doing something we love this much.”