I am not sure that this column or even this newspaper are big enough to contain Mike Finnigan, a true giant of a man in the music industry — and in life itself.

Mike died in Los Angeles on my birthday a week ago, Aug. 11, from liver cancer. He was 76. His daughter Bridget said he fought it “like an Irishman.”

You might know Mike best as the keyboard player for Crosby, Stills and Nash, but he started out running tunes and jamming with Jimi Hendrix. He toured with Etta James, Bonnie Raitt, Joe Cocker, Taj Mahal, Michael McDonald, Joe Walsh, Billy Bob Thorton (really) and even got together to record with Ringo Starr and Mick Jagger. His instrument was the Hammond organ. He had a booming, blues voice that filled every venue. He also had his own gig, too, with the Grammy-winning Phantom Blues Band.

And he was an icon in another way, as a role model to countless people battling addiction. Mike had more than 35 years of sobriety and although AA has no so-called leaders, if you lived in LA and were involved at all in any of the anonymous groups, you knew of him. David Crosby brags about Mike being his first sponsor when he got clean.

This man who was so much to so many was also my friend for more than three decades. I was fortunate that my interest in the world of music fostered a warm relationship with him, his wife Candy Finnigan and their daughter. By the way, you might know Candy from the TLC show “Intervention.” An addictions counselor, she herself has years of recovery. Bridget has a background in nursing and is now studying to be an EMT.

Her brother, Kelly, follows in Mike’s footsteps with his band, the Monophonics.

Mike and Candy were married for 52 years, probably close to a record in their circle. Although extremely successful, Mike was one of the most humble people I knew. And he took the gifts of kindness and concern seriously. He made music, but he also made a place of solace and security for his friends and others.

He read a lot and had a political blog, “Crooks and Liars,” in which he expressed his progressive views. It had a very large following. In his youth, he played college basketball for the Kansas Jayhawks.

He also taught confidence. Bridget, who has a slight speech impediment, was teased a lot as a child, that is, until her father bought her a pair of pink boxing gloves and taught her how to hit. She hauled back and broke a tormentor’s nose; she got suspended from school, but her father did not punish her. Sometimes, he said, you have to stand up for yourself. The teasing abated.

Although there were no boxing gloves involved, Mike helped one of my daughters decide where to go to college. They had a great discussion after a Bonnie Raitt show in Rochester; he told her to follow her heart and not be influenced by a big scholarship from a school that she was lukewarm about. She is a talented musician, too, but she told him she didn’t really want to study it. His response was simple: Don’t.

He and Candy early on helped me with an eating disorder that I overcame. When I had my babies, they sent me gifts. Every time Mike was in the area to do a show, I interviewed him and sold the story. We kept up with each other mostly through email, and Bridget and I got close. I talked with her for an hour the other night and I told her I had to write about her Dad again, about how sorry I was that he was gone and what a big hole he had left for so many.

She told me that throughout his illness, he did not want a lot of people to know, although I am sure they noticed his absence on the music scene. He last performed in Sherman Oaks in 2020.

She thinks, Bridget said, that he wanted people to remember him as he was, before he got sick. The stoic man for so many, but also a man who was quick to laugh and enjoyed smoking his cigars, going to the gym and performing songs like Sam Cooke’s “A Change is Gonna Come.”

That is how I will think of him, the man who had the audacity to die on my birthday. I can hear him belting out Ray Charles’ “I Got News for You” and Little Milton’s “Grits Ain’t Groceries.”

I am glad I get to share this incredible man’s legacy. I will miss him.

Saw him perform “Don’t Answer The Door” live at the Holland Int. Blues Festival in Grolloo in 2016. Very powerfull voice en great organ play! Watch and listen to the video posted above from that evening.
R.I.P. Mister Finnigan and thank you for touring and recording with Bonnie! ﻿🎹﻿ 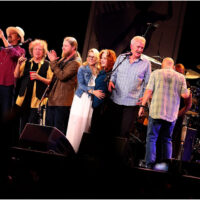