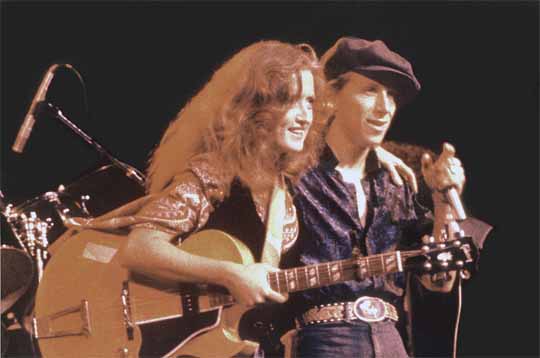 Steve Miller knew Norton Buffalo was special from the first time they shared the stage together.

It was in 1975, not long after Miller finished recording “Fly Like An Eagle,” the multiplatinum smash that would make the Bay Area singer one of the biggest stars in the rock universe. The setting was a low-key jam session in San Rafael, where Miller joined Buffalo for a few numbers. The chemistry, recalls Miller, was so immediate and undeniable that Buffalo soon became a vital part of the Steve Miller Band and remained so for the rest of his life.

“I just thought he was magnificent,” Miller said during a recent phone interview from his Idaho home. “He just became my partner in harmony. I don’t know how many gigs we did, 4,000, 5,000, just a huge number of performances, and he never once held back. I think he was that way with everyone he worked with.”

It was that giving nature, more than all the gold-and-platinum records that he appeared on, that made Buffalo such an important part of the Northern California music scene for 40 years, and a key reason why he’ll be so dearly missed.

Buffalo, who was born in Oakland and raised in Richmond, died Oct. 30, less than two months after being diagnosed with brain and lung cancer. His passing, at age 58, was a devastating blow to a Bay Area music community that treasured Buffalo’s tireless involvement.

To show their respect, love and admiration, many of Buffalo’s most-notable collaborators — including Miller, the Doobie Brothers, Bonnie Raitt, Huey Lewis and Roy Rogers — will join for “Norton Buffalo Tribute” concerts Friday and Saturday at the Fox Theater in Oakland. Proceeds will help cover the medical costs and other expenses Buffalo’s family incurred during the musician’s illness. (Both nights are sold out, but contributions to the family are still welcome at www.norton-buffalo.com.)

Most expect the tribute concerts to be emotional affairs, as friends, fans and family members continue on the long road of coming to terms with Buffalo’s death. The fact that it all happened so quickly only makes it harder.

“I don’t think people have begun to realize that Norton is not here,” Miller says.

Buffalo was never a huge star. Instead, he’ll be remembered as the sideman that made other musicians sound better. He was also known as a player that could handle just about any style of music, from blues and rock to country and, even, Hawaiian.

“You wanted Norton Buffalo on your record,” says Bay Area slide guitarist Roy Rogers, one of Buffalo’s most frequent collaborators. “Norton was really the quintessential guy to call upon.”

And many did — it’s estimated that Buffalo played on more than 180 albums during his career. His more notable recordings include the Doobies’ Grammy-winning 1978 album “Minute by Minute,” Miller’s multiplatinum 1977 work “Book of Dreams” and Bonnie Raitt’s 1977 Top 40 outing “Sweet Forgiveness.” Yet, he also was a sideman on scores of records that never hit the charts.

“He would take on your project with all the same enthusiasm that you had,” Miller says. “With some session guys, you know, each lick was so much money. It never felt that way with Norton. With anybody he ever worked with, he gave you 110 percent of what he had. He was just a joy to work with, and he delivered like very few people do.”

Born into a musical family — his father was also a harmonica player and his mother sang in nightclubs — Buffalo was nothing short of a virtuoso on his instrument. After graduating from Kennedy High School in Richmond in 1969, he sharpened his craft by playing alongside blues hero Elvin Bishop and in the bands Clover and the Moonlighters in the ’70s, before coming to Miller’s attention.

“He was a phenomenal harmonica player,” Miller remarks. “He was a great soloist — compared to guitar players or horn players or anything, he was absolutely one of the best in the world at what he did. There was Toots (Thielemans), there was Charlie McCoy and there was Norton. And then after that there was just a bunch of pretenders.”

Miller thought so highly of his sideman that he persuaded his label, Capitol Records, to sign Buffalo to a recording contract. That resulted in two well-regarded records — 1977’s “Lovin’ in the Valley of the Moon” and 1978’s “Desert Horizon” — but not in superstardom.

He continued releasing his own records on smaller labels (such as San Francisco’s blues-centric Blind Pig) throughout this career. Some came as the leader of his own band, the Knockouts, while others were tandem productions with Rogers. Of the latter, the duo’s 1991 debut, “R&B,” would produce the Grammy-nominated country instrumental tune “Song for Jessica.”

For all his time spent in the studio, Buffalo did some of his best work in concert. Whether he was sharing an amphitheater stage with Miller or fronting his own ensemble at a small nightclub, the harmonicat — who was also an accomplished vocalist — certainly knew how to work the crowd.

“Onstage, he was magic,” says Buffalo’s widow, Lisa Flores-Buffalo. “He always brought a magic and an energy level that was incomparable.”

Lisa Flores was living in Washington when she first laid eyes on her future husband, who was performing at a blues festival. She met him later that night and the spark — as seemingly was the case in all first encounters with the man — was immediate.

“It was love at first sight and we never looked back,” she says. “I just fell in love with his spirit. He was just such a beautiful and vibrant soul.”

She followed him back to his home in Sonoma, and they were soon married. Not long after, they moved to the town of Paradise in Butte County, where Flores-Buffalo still lives.

Buffalo was an active part of the Paradise community during the last years of his life, lending his support and talent to various projects. “Norton did so much community service,” Miller says. “He did so many benefits for so many people. Every community he lived in, he was there giving his time and his energy. If everybody raised his hand that he did a benefit for, it would be in the thousands.”

Buffalo was also naturally upbeat, a trait that didn’t desert him during his battle with cancer.

“He knew he was really sick, but he remained very positive,” Rogers remarked. “He was going to beat this thing or meet it head on.”

It’s still hard for many fans and friends to fathom that Buffalo lost the fight. There will be some disbelief still in the air when his all-star friends gather to honor his life at the Fox Theater. The hope is that the occasion will bring some sense of closure, but also serve to prop open the door for many to learn about Buffalo’s music.

“I think as time goes on, his reputation and his legacy will become bigger and bigger,” Miller says. “There are just some people who pass through the world that are unique and special and defy description. Norton was one of those people.”

PREVIEW
WHAT: Tribute to Norton Buffalo
WHEN: 7 p.m. Friday-Saturday
WHERE: Fox Theater, 1807 Telegraph Ave., Oakland
TICKETS: $49.50-$125 (currently listed as sold out), 800-745-3000, www.apeconcerts.com
DONATIONS to Norton Buffalo’s family can be made through www.norton-buffalo.com.

RELATED
Bonnie Raitt on Aretha Franklin: ‘The Most Influential Artist in My Life’